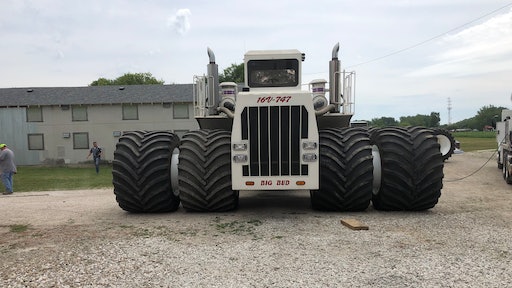 Titan International, Inc., manufacturer of Titan Tires, Titan Wheels and Goodyear Farm Tires, has helped bring the legendary 1,100-hp Big Bud 747 4WD tractor back to life, having been stationary for a few years and at the Heartland Museum in Clarion, IA, for the last 8 years due to irreparable tire damage. The largest ag tractor in the world is now outfitted with eight of the largest ag tires in the world — the first-ever dual configuration with Goodyear Optitrac LSW1400/30R46 tires.

Robert and Randy Williams of Big Sandy, MT, still own Big Bud after buying it from the original owners who were cotton farmers in California. The Williams brothers used it for cultivating until a tire suffered irreparable damage.

Its original tire manufacturer, United Tire Company of Canada, had stopped making its custom tires, so Big Bud was retired and put on display at the Heartland Museum, where museum owners built a shed just for Big Bud.

The Williams Brothers’ ultimate goal was to restore Big Bud to its former glory and bring it home to their farm in Montana. That’s where local tire dealer Janesville Tire Service was brought in to help find a solution.

“We came down here and tore it apart and one of the original tires was beyond repair,” says Paul Beckstrand of Janesville Tire Service. “So, I called Scott Sloan from Titan – they’re a good company to work with.”

Titan and the Janesville Tire Service team put on eight Goodyear Low Sidewall (LSW) 1400/30R46 tires on July 14, with new rims to support the dual LSW setup. Now that it can operate again, Big Bud will return home to Montana, where it will be ready for any challenge ahead.

Scott Sloan, Ag Product Manager/Global LSW at Titan, was happy to help get Big Bud back up and running with the support of Titan, Twin Valley Tire and Janesville Tire Service. Wold Rim & Wheel also deserves a lot of credit for the modifications they were able to make to the Titan assemblies to finalize the fitment for the Big Bud.

“It’s definitely a legend,” says Nick Welker of Welker Farms, Inc., who was on hand to see the tire change. Welker is a Montana farmer who owns several Big Bud 600 hp tractors and is a Big Bud super-enthusiast. He traveled to Iowa to capture the transformation on video for his popular YouTube channel.

“The look of it, the size of it, the sound of it, the story of it…it would sadden a lot of people if this thing got cut up and sold to scrap,” says Welker.

The Williams brothers are currently making plans to bring the Big Bud 747 home sometime this fall to run it during harvest and then have it on display in Montana, at a to-be-determined location. The tractor will be demonstrated during the Farm Progress Virtual Experience, on September 15-17.