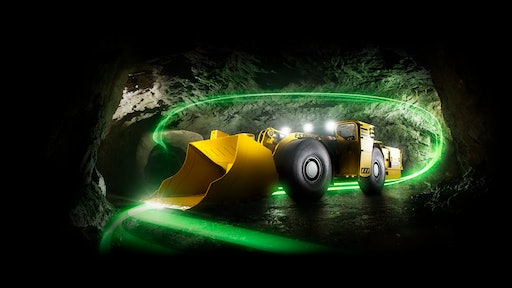 The search for more resources is driving many mining companies to delve deeper underground to extract more materials. According to Dann Gwyn, Product Manager for Underground Mining at GE Mining (GE, company information, 10784190), Glen Lyn, VA, the deeper miners and equipment go into the earth, the less cost effective it is to use machinery running on diesel technology due to the large amount of ventilation infrastructure that is necessary to keep the working environment safe.

While advancements in diesel technologies, such as Tier 4 engines, have helped to minimize the amount of pollutants released into the atmosphere, Gwyn notes there are still diesel fume and diesel particulate matter (DPM) emissions that can be hazardous. “We see a great advantage in removing the diesel entirely which alleviates these problems along with the heat and noise that the engines produce,” he says.

To meet the growing emissions, safety and energy efficiency concerns of the underground mining industry, the development of electric-powered machinery has increased.

“Electric power is the future,” says Unosson. “Electricity is superior from the point of view of energy efficiency and the purest form of energy we know today. In addition, the price of oil is not likely to get any lower."

GE is currently focusing much of its development efforts on integrating its Invertex propulsion system (more information, 10796452) and Durathon battery technology into the company’s scoop product line. With the Invertex system, an AC electric drive, which controls traction and pump motors, is used to propel the vehicle forward or backward while the Durathon battery provides power to the entire vehicle.

According to Gwyn, the Durathon battery offers greater energy density than other battery technologies due to its sodium-nickel-chloride chemistry. This formula also makes the battery less toxic, longer lasting, as well as contributes to its temperature stability. Unlike many other types of batteries, the Durathon battery does not require a cooling period once it is finished charging. Instead, it can be used immediately and eliminates the need for multiple batteries to be kept on hand to accommodate for the charging and cooling-off periods other types of batteries typically need.

Gwyn says the battery also comes with a Battery Management System (BMS) that controls each battery module and ensures that it is operating correctly, protecting it from failure modes industrial batteries often face.

Combining the Invertex system together with the Durathon battery offers several performance benefits that Gwyn notes are not often available with diesel-run vehicles. These include better low-end torque, wheel slip control, better diagnostic and fault identification for improved maintenance, and the ability to provide real time data gathering. “Overall we see that battery technology provides for a lower Life Cycle Cost (LCC), provides better performance, and [is] safer to operate,” says Gwyn.

In addition to the performance, health and safety benefits electric/battery powered vehicles can offer, there are also cost benefits, with fuel savings being one of the most obvious. “Depending on the vehicle, it typically costs upwards of $100 to fill a tank versus around $20 to charge a battery,” says Gwyn. He adds that maintenance costs are also drastically reduced “by eliminating the changing of oil, maintaining the transmission, and replacement of filters to reach the different Tier levels.”

While GE is focusing much of its efforts at the moment on integrating the Invertex and Durathon technologies into its scoop products, the company will begin adding it to other underground product lines in the near future.

For the Electric Minetruck EMT35 and EMT50, electric motors directly drive the trucks’ axles and wheels while an electrified trolley rail powers the trucks as they move up and down ramps within the underground mine. Once there is no access to the overhead trolley rail, such as when a truck reaches a loading or dumping station, Unosson says the truck disengages from the trolley and automatically activates a small, onboard diesel engine that drives the vehicle.

Further efficiency is gained through the use of a regenerative braking system. As the mining truck descends down a ramp, the electric motors capture energy released by the brakes—which have been activated to slow the truck’s speed while it travels down the ramp—and put that energy back into the truck’s electrical system. Atlas Copco says almost 30% of the energy consumed while the truck is driving up the ramp will be regenerated as it descends.

Also introduced as part of the Green Line were the Electric Scooptram EST1030 and EST14. Unosson says these LHDs use electric motors developed by ABB (company information, 10239005) to power the vehicles. In addition to the electric motor, the EST1030 also uses a 132 kW electric engine. By using an electric motor instead of diesel engine, the LHD consumes less energy as well as generates less heat and noise. “By replacing diesel powered equipment with electric powered equivalents, mines can realize huge potential savings at the same time as they improve the environment, not to mention the spin-off effect of increased job satisfaction and reduced personnel turnover,” says Unosson.

Included on the electric LHDs is a cable reel management system, called the Low Tension System, which is designed to keep a 3 to 400 meter electrical cable constantly under control. Unosson explains that electrical cables used for LHDs are typically expensive and exposed to high wear in underground mines. If the cable is too tight it can damage walls and corners or restrict vehicle mobility while too much slack increases the risk of the cable being run over or becoming snagged under the vehicle. “[The Low Tension System] actually lays the cable smoothly in the path of the machine by deploying and retracting the cable at the exact rate of speed of the machine,” says Unosson.

With improvements in energy efficiency and emissions reduction being an ever-increasing focus for the underground mining industry, development of electric-powered equipment by mining OEMs will continue in the coming years. Both Atlas Copco and GE already have plans in the pipeline for which of their vehicles will be available next in an electric version. “Atlas Copco believes in sustainable productivity and will keep developing products to suit our customers’ current and future needs,” concludes Unosson.

CNH Industrial received the award for its ConectarAGRO initiative which aims to contribute, consolidate and expand internet access for farmers in Brazil.
CNH Industrial N.V.
December 17, 2020
Follow Us