European associations and committees call upon the EU to develop a smart regulatory framework for digital machine technology. 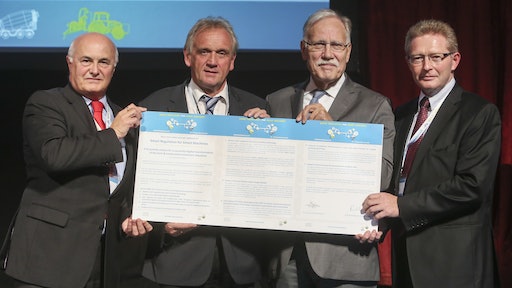 At a joint political summit held in Brussels, Belgium, the presidents of the Committee for European Construction Equipment (CECE) and the European Agricultural Machinery Association (CEMA) presented a Manifesto with five EU priority actions for a successful digital transformation of the construction and the agricultural machinery industries.

CECE and CEMA called upon the EU to create a smart European regulatory framework to help unlock the full potential of the digital economy and empower its respective market sectors of construction and agricultural equipment to master the digital transition. The five priority actions are:

For OEMs and their customers, this will mean considerable change and challenges, but also opportunities. New policy-making approaches are needed to accompany and support the industry transformation that lies ahead.

By taking the time to develop a regulatory outline for construction and agricultural equipment, the two industries underline that when it comes to mastering the transition towards higher-value digitized machines and processes, EU legislation has a prominent role to play. Digital technologies are set to transform the two industries and products in the years ahead and will reshape the value chains they service.

“We need a smart regulatory framework that helps to unlock the full potential of the digital economy,” said CECE President Eric Lepine upon the presentation of the Manifesto. A smart regulation would, for example, make sure that relevant EU regulations recognize virtual testing of machines so it can replace, reduce and refine conventional tests in the future, saving valuable R&D resources and shortening development time to respond more quickly to customers’ needs.

Also the current requirement that an operator needs to be in control of a vehicle at all times may need to be reviewed. Digital technologies are allowing autonomous machine operation boundaries to be redefined, so the regulations for product safety and occupational health and safety need to evolve with the technological progress.

Within the industry, it is all too common to have inconsistent or contradictory sets of regulations. Wolfgang Burget, Managing Director of Liebherr EMtec GmbH and chairman of the CECE high-level technical policy advisory group cited emissions legislation as an example where the EU sets harmonized exhaust limits for machines, but local authorities can opt to introduce additional measures. “This goes against the principles of the internal market. The EU should turn words into deeds and adopt a more holistic approach when designing new policy,” he said.

Digital economy needs a harmonized, European approach to achieve a high degree of interoperability and compatibility of digital technologies and systems. Users and manufacturers should have a reliable, secure and trustworthy cyberspace. In line with this, European approaches are needed to establish clear and appropriate rules governing questions such as the ownership, management and exploitation of digital data flows and the role and function of cloud-based platforms in the digital economy.

Use relevant EU tools and programs

EU programs such as the European Investment Plan and Common Agricultural Policy (CAP) have a role to play in supporting competitiveness and the uptake of innovation in the areas of construction. The goals with such programs should be to design and incentivize investments in digital technology.

According to CEMA, farmers and stakeholders are still unsure as to how the CAP 2014-2020—reformed in 2013—will work in practice. The role of the CAP is to provide a policy framework that supports and encourages producers to address these challenges while remaining coherent with other EU policies, this translates into three long-term CAP objectives: viable food production, sustainable management of natural resources, and climate action and balanced territorial development.

Support and encourage the development of digital skills

There are no shortage of opportunities with digital technology integration and standardized regulations, from workforce development to economic growth potential. The construction and agricultural equipment industries agree that digital skills should be integrated more strongly into educational curricula and ongoing skill development programs in relation to manufacturing, engineering, and construction. To tackle the estimated shortage of ICT professionals in Europe in the coming years, Member States should work to establish mutual recognition of ICT qualifications across the EU and promote cross-border mobility. Digital transformation would undoubtedly trigger a growing demand for highly skilled workers.

Economic benefits of a digitized EU

In terms of economics it was made clear that tides are changing, and markets that were shining just a few years ago are in deep troubles now. In the Economic Forum held at the summit, industry experts discussed why the world economy is not doing too well at the moment, where construction activity will be seen in the near future, and why the prospects for construction equipment manufacturers are not that bad after all.

In his introductory speech, Philippe Waechter, Head of Economic Research at Natixis Asset Management, pointed out that the world economy clearly lacks significant growth drivers. This has implications on commodity and oil prices, which can be expected to remain low in the foreseeable future. While this is good news for regions like Europe as purchasing power rises, it brings more troubles to emerging markets that rely on exports of these products. According to Waechter, it is unlikely to expect significant interest rates hikes in the near future, as long as the overall economic climate does not improve.

For the construction sector, things seem to look a little better. According to Antonio Mura, Director at CRESME Ricerche, the world construction industry is experiencing the worst year since 2009 in 2015, but this will be followed by significant growth of 17% until 2019. Growth in construction is usually concentrated in emerging economies and, despite the current emerging markets slowdown, this trend will be seen in the next years, as well. By 2019, two thirds of the construction investments will take place in these regions. The good news, however, is that with the exception of Japan there will be substantial growth even in mature markets, though clearly on lower levels.

Therefore, demand for construction equipment should be back on track when emerging markets take up their role as engines of growth. Unfortunately, as highlighted by Erik Sjödin, Associate Principal at McKinsey, those regions are typically not the most profitable ones for equipment manufacturers. Highest margins are currently generated in the North American market, and it will clearly be one of the major future challenges for manufacturers to profitably participate in growing emerging markets.

According to David Phillips of Off-Highway Research, as the Chinese construction equipment market tumbles—and Chinese manufacturers run at a capacity of under 20%—and headlines are made with crises and scandals from Russia to Brazil, we see the unusual situation that sales growth is concentrated in Europe and North America.

Ann Duignan, equity analyst at JP Morgan, discussed with industry experts the short- and medium-term prospects of these markets, and how European manufacturers can remain competitive. Free trade agreements like TTIP may foster growth and competitiveness. The comparably weak European currency certainly helps in the short run, but the industry should look at staying competitive because of its core strengths like technological advancement and powerful distribution and after sales networks in the regions.

Study on future trends in the construction equipment sector

During the summit, CECE announced that with the help of McKinsey it is undertaking a study exploring the future trends in the European construction equipment sector and how companies will be reacting to it. Erik Sjödin of McKinsey explained that the sector is characterized by low volumes but high complexity, a relatively fragmented OEM landscape and high profits in a few segments where margins are quite good. A few machines types make up majority of volumes and revenues like for example crawlers.

Sjödin said that considerable change was to be expected in the years to come and that there were two decisive factors for the industry: disruptive technology shifts and a tough demand situation in a changing competitive landscape.

A lot of new innovations come from outside the industry, mainly from IT and digitization. Thus, Big Data will become the competitive element and will not only change service but whole business models. While customer structure is changing, new competition is coming in and pressure on margins is likely to rise. According to Sjödin, as the number of players shrink and the markets become less local, the more competitive it will be for the sector. The study is underway and is supposed to be launched at bauma 2016.

Controller modules deliver rugged and robust outputs for auxiliary functions for off road vehicles. Check out the all new CM2723 today.
April 5, 2021
Latest

Biden to Meet with Industry on Semiconductor Chip Shortage

Executives from PACCAR and Cummins will participate in an industry meeting to discuss the impacts of the semiconductor chip shortage.
Sara Jensen
April 12, 2021

Controller modules deliver rugged and robust outputs for auxiliary functions for off road vehicles. Check out the all new CM2723 today.
April 5, 2021

Trimble has partnered with Piaggio Fast Forward to integrate technology into Boston Dynamics' Spot robot which enables it to autonomously follow humans and machines.
Trimble
March 22, 2021
Follow Us