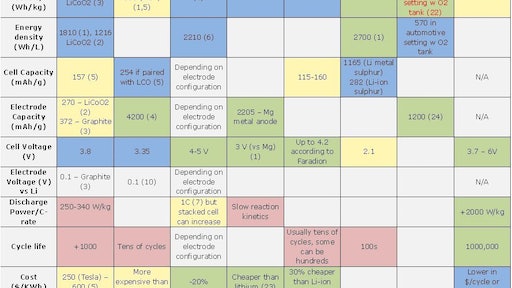 The table illustrates theoretical performance levels that can be achieved by various battery technologies, with color coding indicating how these technologies compare to current industry demands.

Lithium-ion has become the dominant battery technology in many applications, and is the core technology for many emerging applications including electric vehicles. Franco Gonzalez, Senior Technology Analyst at IDTechEx—a provider of emerging technology insight, intelligence and networking—said during the company’s recent webinar “Advanced and Post Lithium-Ion Batteries 2016-2026” that in the past several years there have been incremental improvements in lithium-ion (li-ion) battery technology. “[It] has had an increase in energy density of 5% per year and cost decrease of 8% per year.”

Advancements in the battery chemistry, particularly for the anode, have helped with these improvements, as well as developments in manufacturing the battery. Electrocoating, for example, has had a large impact on improving the productivity of the manufacturing process leading to a four times reduction in manufacturing costs.

However, Gonzalez said the technology will not be able to meet the future requirements of emerging applications due to its limitations in terms of energy density and other parameters. Li-ion technology is expected to plateau around the range of 250-300 Wh/kg. This has brought about increased interest in the research and development of new battery materials.

Lithium-air and lithium-sulfur are among those which have shown the greatest potential to achieve the same energy density capacity as li-ion. Lithium-air could have the potential to provide around 1,000 Wh/kg while lithium-sulfur has demonstrated the potential for 500 Wh/kg. “Some of these technologies have been widely promoted in terms of what they can achieve in theory,” said Gonzalez. “But it’s important to emphasize in theory doesn’t mean what has been achieved in practice.”

Emerging technologies and their actual potential

Gonzalez emphasized that there are many factors that must be considered when developing a new battery material. While energy density is an important parameter, it is also necessary to consider safety, price and the number of cycles a material can achieve.  Additionally, different applications have different sets of requirements which must also be taken into account when developing a material. The chart on pg. xx shows the theoretical performance of various battery materials and how they compare to current industry demands.

As the chart indicates, lithium-air and magnesium-anode are among the technologies which demonstrated high theoretical battery performance but had poor results in certain areas, such as safety, when it came to being put to real-world battery performance standards.

According to Gonzalez, there are three main challenges associated with the development of post lithium-ion battery technologies. The first is the battery technology itself, ensuring it meets all of the necessary requirements for energy density, safety, number of cycles, the materials involved, etc. Scaling the material for manufacturing is the second challenge, as it can be difficult to change the size of the battery cell without affecting the desired performance characteristics. “As [you] increase the size of the cell, you increase the possibility of having impurities or quality defects that can reduce performance [from] that achieved in the lab,” said Gonzalez. This can be particularly challenging for specific types of applications—such as some of the more niche, emerging applications aiming to use battery technology—because there is no standardization for battery cells as there is for consumer electronics. Gonzalez added that new battery technologies able to adjust to existing manufacturing processes will be the most likely to succeed.

The third challenge associated with developing new battery materials is the commercial and financial risks involved. Research and development, as well as manufacturing investment require a lot of capital. Certain sectors, such as automotive, also have high barriers of entry due to their high performance, safety and reliability standards. Gonzalez noted it can take a battery manufacturer 7-10 years to enter that market which is a long time for a start-up to survive financially. Because of this, he said many new companies target smaller, more niche segments with fewer requirements and barriers for entry in which to nurture and develop their technologies.

Silicon anode batteries have been found to provide up to a 30% increase in energy density when the anode is made completely of silicon. However, Gonzalez said expansion and contraction of the silicon material pulverizes its structure which can cause performance issues. Researchers have found that by reducing the amount of silicon in the anode, and instead using a composite of graphite and silicon, the mechanical stresses the silicon suffers during cycling can be minimized. Due to this benefit, as well as Elon Musk’s announcement in July 2015 that Tesla will be using batteries with composite silicon graphite material, Gonzalez said many companies have begun investing more into the development of composite silicon graphite batteries. While use of a composite material helps alleviate the issue of material degradation, he said the technology is still not capable of achieving the high number of cycles required by many applications which will continue to be a significant challenge for its market use.

Featuring both solid electrodes and solid electrolytes, solid state batteries offer safety advantages over other technologies due to the elimination of liquid in the electrolyte. Gonzalez said the introduction of lithium-metal anodes helps increase capacity of the battery cell, as well. The material also enables suppression of side reactions known to occur at the electrode source such as dendrites—microscopic fibers that can be formed from the battery material after several charge/discharge cycles or fast cycle rates and eventually cause short-circuiting issues.

One of the main issues associated with solid state batteries is the lower ionic conductivity of the solid electrolytes compared to their liquid counterparts. Gonzalez said a new generation of materials is, however, helping make improvements in this area. Some companies have achieved conductivity measures of 10 to -3 Siemens per centimeter (S/cm) which he said is a vast improvement over first generation solid state batteries which were in the range of 10 to -6 S/cm. These improvements have caused many companies to further invest in the research and development of this technology.

Sodium-ion is an interesting battery technology option, said Gonzalez, because they offer a lower price solution compared to li-ion while providing similar performance. Unlike lithium, sodium is an abundant material available in many parts of the world; it is also a cheaper material. Sodium-ion batteries also enable the use of two aluminum current collectors without the need for copper. This helps reduce the price of the battery even further because aluminum is three times cheaper than copper. Sodium’s atomic structure and chemical properties is similar to lithium’s which enables this battery technology to provide comparable energy density to li-ion. “This battery technology offers a very interesting value proposition not only to lithium-ion batteries but compared with lead-acid batteries, which we should not forget are the largest battery market still,” Gonzalez said.

He noted that development of the technology is currently at the medium-maturity stage. One of the current drawbacks of sodium-ion is the limited number of cycles it offers which is in the range of 10-100, though some companies have reported as high as 300 cycles. The lower cycle rate and performance is due in part to the larger sized radius of the sodium-ion compared to that of li-ion. To overcome this, Gonzalez said there is a need to develop different materials for the electrodes and electrolytes that can better accept the larger sodium-ions.

Gonzalez said lithium-air is one of the more famous battery technologies with high expectations and research interest due to the high specific energy potential it offers (some estimations are as high as 10 times the energy density of li-ion). However, he said many are coming across challenges they had not anticipated with the technology. Current power densities that have been achieved are one to two times lower than li-ion, preventing it from meeting the power requirements of many applications. Decomposition of the active materials impacts cycle volume—causing it to be low—while reactivity of the lithium-metal anode has presented performance challenges, as well. Gonzalez said it will most likely be some time, in the range of 10 years, before this technology will be available in the market.

Magnesium batteries are said to be a promising technology, as well, based on magnesium having a higher volumetric energy density than lithium. While magnesium is the eighth most abundant element in the world, it is highly concentrated in only a few areas. It is a non-toxic material, though, and is 20 times less expensive than many other comparable raw materials used for battery anodes.

Of the various battery technologies being researched, Gonzalez said one of the closest to commercialization is lithium-sulfur batteries for use in wearable electronics in the defense sector. He noted silicon-anodes are also currently being tested in consumer electronics and the automotive sector, while lithium-capacitors are being tested in electric buses and demonstrating promising results. Lithium-capacitors are already a fairly mature technology offering quick release of high power capacities.

Where does the market go from here?

The growing trend towards more battery technology research and development has been brought about in part due to the aftermath of the great recession. Gonzalez said it caused many companies to look for new sources of growth potential. In addition, there has been an increased focus on environmentalism and vehicle electrification, requiring the development of new technologies.

Gonzalez concluded the webinar by stating that IDTechEx anticipates the entire battery space to reach a volume of $120-$140 billion by 2026. This includes batteries for consumer electronics, electric vehicles—both passenger cars and commercial vehicles such as buses—and residential energy storage.