CiA's most recent Plugfest allowed attendees from various companies to test the communication capabilities of their CAN FD products.

CAN in Automation (CiA) 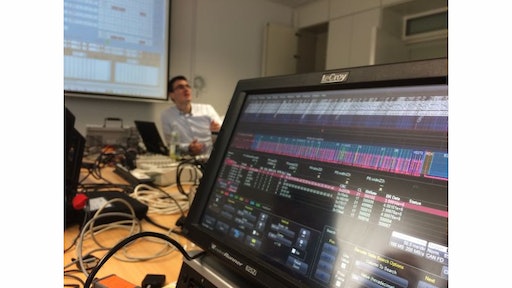 At the end of October, a CAN FD Plugfest took place in the offices of the international users and manufacturers group CAN in Automation (CiA). Participants from 14 companies communicated in a network with their CAN-FD products. Among them were manufacturers of micro-controllers (Infineon, Renesas, Spansion, and STM) and companies that employ FPGA implementations (Bosch, ESD, Ixxat/HMS, Kvaser, National Instruments, Peak, as well as Daimler and Volkswagen). Data was transmitted with 500 kbit/s in the arbitration phase. The bit-rate of the data phase started with 1 Mbit/s and was then raised up to 10 Mbit/s. No errors frames were detected up to a bit-rate of 5 Mbit/s – even during busloads up to 100% over a longer period of time (several hundred thousand frames). LeCroy participated with a passive bus analyzer, which was able to interpret the individual bits of the CAN FD protocol. CiA will organize similar events in the US and Japan in 2015.

At the moment, the CAN FD protocol is being standardized by ISO. It is supposed to be internationally standardized in the ISO 11898-1 standard. High-speed CAN communication is specified in the ISO 11898-2 standard. The document, which is under revision at the moment, is also supposed to include the low-power option (ISO 11898-5 to date), as well as the optional selective wake-up function (ISO 11898-6 to date). Both standards are to be published in 2015. ISO committees are also working on expanding the ISO transport layer protocol (ISO 15765-2) so that it can support the larger data frames (up to 64-byte payload). The nonprofit Asam association has adapted the CAN-based calibration protocol as well. Corresponding Autosar extensions have also been approved and will be published soon (Version 4.2.1).

CAN FD is also being discussed in the responsible CiA interest groups. Besides the activities regarding generic network design recommendations (CiA 601), an update of CiA 301 is planned. Under the name CANopen+, the application layer will be extended accordingly. Besides 64-byte SDOs, the PDOs are to be extended to 64-byte too. This is especially of interest for complex CAN devices, for which the previous 8-byte limit led to functional restrictions. The PDO extension is especially beneficial for devices that support functional safety as well as security measures. Normal functionality can also be improved by longer PDOs. Electrical drives according to CiA 402 can receive several commands in one PDO. However, the CANopen profiles have to be revised accordingly.

Recently the CiA organization has started the Interest Group (IG) “Commercial Vehicles.” The group will develop an application layer for CAN FD networks in trucks and omnibuses, which will be submitted to SAE (Society of Automotive Engineers). In this context the physical transmission will be specified too. These specifications are developed under the name CiA 602. They will adopt the functions and data standardized in J1939 as far as possible. It is more or less a matter of mapping the existing SAE specifications to CAN FD networks.

Even though CAN FD has adopted many principles of Classical CAN, there are some characteristics the user should pay attention to. To get this information to users from the various sectors, CiA will organize informative events (CiA Tech Days) and dedicated seminars (CAN/CAN-FD Training) worldwide throughout the next year. The latter are addressed at developers who don’t have much experience with CAN. The CiA Tech Days mainly want to inform technical managers about the possibilities and limits of CAN FD. Moreover, CAN FD will be a topic at the 15th international CAN conference in Vienna.

“The CAN FD protocol not only allows higher transmission speeds, but also longer frames with a maximum of 64 bytes,” explains Holger Zeltwanger, CiA Managing Director. Besides the semiconductor manufacturers, providers of software tools have also started to adapt their products to CAN FD. However, the original CAN FD protocol had to be changed to improve the reliability of the data transmission. “Among others, a stuff-bit counter was introduced, which is protected by a parity bit,” clarifies Zeltwanger, who also chairs the related ISO working group.