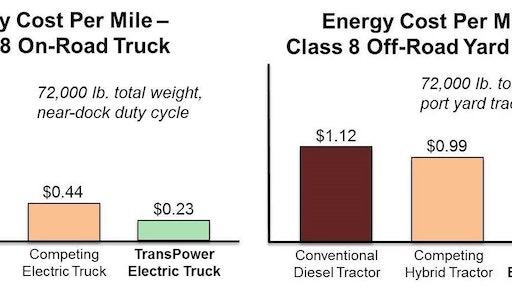 "The results demonstrate that TransPower's electric drive technology is not only safe, reliable and clean, but they show a clear business case for adoption of our technology," states Frank Falcone, TransPower's Director of Powertrain Engineering. "For a truck with a half a million mile operating life, the energy cost savings predicted by the CE-CERT testing would amount to $630,000 over the life of the truck. We estimate that with maintenance savings, total life-cycle savings could exceed $700,000 and that could increase to $1 million or more with higher fuel prices."

These benefits were demonstrated during recent testing of a Class 8 on-road truck and a Class 8 off-road yard tractor using the latest version of TransPower's ElecTruck heavy-duty EV drive system. The tests were performed in September 2014, utilizing a chassis dynamometer at UCR's renowned College of Engineering – Center for Environmental Research & Technology (CE-CERT).

A Navistar International Pro-Star Class 8 truck equipped with TransPower's ElecTruck system "performed all tests with a high degree of reliability," according to an April 2015 report just released by CE-CERT. Additional conclusions contained in this CE-CERT report include:

CE-CERT testing of a Kalmar Ottawa yard tractor powered by the ElecTruck system produced similar results. The TransPower electric tractor produced about three times the emissions reductions of a comparable hybrid-electric tractor tested a few years earlier. Tests of both TransPower vehicles were performed at equivalent total vehicle weights of up to 72,000 lbs., confirming the high performance of the ElecTruck system.

These results have been confirmed by real-world operations. Since being deployed at IKEA's main Californiadistribution center in September 2014, the TransPower electric yard tractor tested by CE-CERT has had an energy cost of 25 cents/mile when using power supplied by the utility grid. However, as 90% of this tractor's energy is produced by solar arrays installed at IKEA's facility, the actual energy cost of operating this tractor has been less than 3 cents per mile.