The first of its kind in Africa, Kiira Motor's Kayoola Solar Bus uses batteries and solar panels to power the bus with no tailpipe emissions, and will aid Uganda in its goal of locally producing technology for its people. 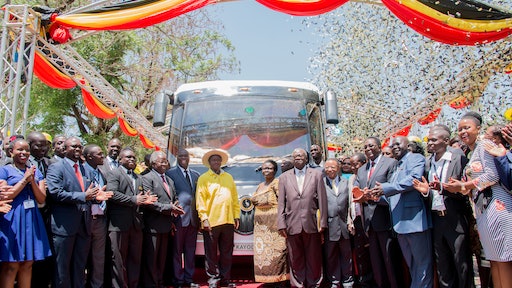 Ugandan President Yoweri Museveni launched the “Kayoola Solar Bus” model bus that is a first of its kind in the continent, marking the entry of Uganda into the billion dollar global automotive economy.

“We are here to celebrate the Ugandan innovator with a mission to industrialize our nation,” said President Museveni, referring to the Kiira Motors team that he commissioned in 2009, through the Presidential Initiative for Science and Technology Innovations.

“The Kayoola Solar Bus has the golden stamp of 'MADE IN UGANDA.' Our scientists have made us proud,” he added, as he reiterated the Ugandan government’s commitment to the funding required to see Kiira Motors Corporation start manufacturing as proposed in 2018 and establish a sustainable automotive industry in Uganda.

The USD 145 million budget will be used over a period of 5 years (2016–2021) to develop key infrastructure at the Uganda Investment Authority’s Jinja Industrial and Business Park that will host the Kiira Motor Corporation, and a research and development program that will equip over 200 key personnel with global skills and exposure required for this visionary project.

The Kayoola Solar Bus is critical to the achievement of Uganda’s Vision 2040 “A Transformed Ugandan Society, From a Peasant to a Modern and Prosperous Country within 30 Years.” Within the vision is the National Development Plan II, which seeks to strengthen Uganda’s competitiveness for sustainable wealth creation, employment and inclusive growth, with an emphasis on science, technological innovation and industrialization.

Speaking during the launch, Kiira Motors Corporation CEO Paul Isaac Musasizi described the Kayoola Solar Bus development as “An East African Affair” as he listed the input of Kenyan glass suppliers and experts who manufactured and fitted the glass work. He commended the Standard Gauge Railway (SGR), as one of the supporting regional initiatives that will be used to transport raw materials and finished goods between Uganda, Kenya, Rwanda and South Sudan.

Designed as a 35-seater electric solar bus with zero tailpipe emissions, the Kayoola Solar Bus has a powertrain architecture based on two battery banks. The primary battery bank supplies electrical energy to the propulsion motor while the secondary power bank is available for charging, either in real time using the on-board solar charging system or the plug-in charger system. The solar panels are mounted on the roof, taking full advantage of Uganda’s exceptional position at the Equator. The primary and secondary roles are transient from a physical perspective of the electrical installations.

“Beyond local consumption, which is in excess of 45,000 vehicles that are imported into Uganda every year, the Kayoola Solar Bus will be exported to markets as far as China, who have a shortfall supply of up to 2 million vehicles per year. Iron ore deposits, estimated to be over 260 million metric tons and oil deposits in Uganda will be a key source of raw material for the automotive industry in Uganda,” he further explained.

“The savings expected per 100 km using the Kayoola Solar Bus, compared to the conventional diesel-powered buses, is expected to be 63%, providing a lower cost mass transportation solution, as well as assuring profitability when in service,” he concluded as he invited President Museveni to officially launch the model bus and take a ride on it.