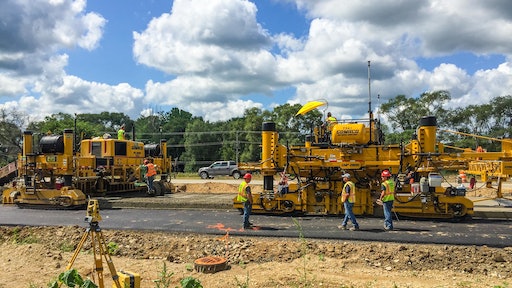 “This robotic-based system does not encounter sensor outages from bridges and tight paving lanes, including sound walls and active traffic on a mainline project, which could be a problem using GPS,” says Brian Lingobardo, Topcon­ 3D Road Construction Systems Manager.

The LPS system uses the new MC-i4 receiver with LongLink for local communications between the robots. “Multiple robots can be setup ahead of time for seamless transitions and without the need to stop to switch total stations. Often a contractor needs to minimize stoppage to achieve tight ride specifications on projects such as tollways,” Lingobardo says.

“The robots provide very accurate data to the paver’s control system and in turn the results are very impressive,” says Lingobardo.