Testing Technologies of the Future, Today 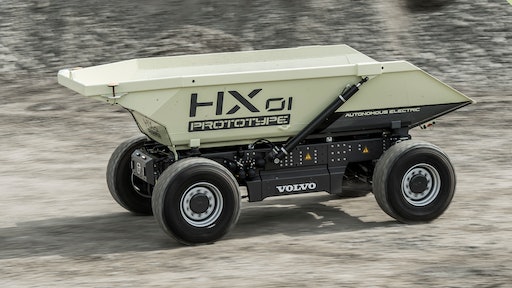 The HX2 load carrier will be similar to the previous HX1 model (pictured) but will now include a vision system to detect people and objects in its path.
Volvo Construction Equipment

At CONEXPO-CON/AGG 2017, Volvo Construction Equipment (Volvo CE) debuted its HX2 concept battery-electric, fully autonomous load carrier. The HX2 is the next generation of concept machines the company has been developing as part of its electric site research project to demonstrate efficiency and emissions-reduction technologies. The project predicts up to a 95% reduction in carbon emissions and up to a 25% reduction in total cost of ownership can be achieved.

The HX2 is one of several electrically powered vehicles operating on the research site. Uwe Müller, Volvo CE’s Chief Project Manager for the electric site project, says the machine is driven by two electric motors powered by a battery. An additional electric motor is used to drive the hydraulics system.

“By using electricity instead of diesel to power construction equipment in a quarry we have the potential to deliver significant reductions in fuel consumption, CO2 emissions, environmental impact and cost-per-tonne,” said Johan Sjöberg, Technical Specialist in Site Automation at Volvo CE, in a press release announcing the electric site project. “The electrification of construction equipment will produce cleaner, quieter and more efficient machines – this represents the future of our industry.”

In addition to battery-electric operation, the load carrier is fully autonomous. It follows an adjustable, pre-programmed GPS path to maneuver around the job site. The HX2 is part of a complete job site solution; it works in tandem with an LX1 prototype hybrid wheel loader and grid connected excavator to complete daily tasks. Müller says the project’s aim is to electrify a transport step in a quarry—from excavation to primary crushing and transport to secondary crushing. A fleet management system is used to track the vehicles and ensure efficient equipment flow.

A key development effort for this next generation HX load carrier, says Müller, is sharing technologies and components from within the Volvo Group such as electric motors, batteries and power electronics. The HX2 also has a completely new drivetrain integrated into it which he says “was key in order to take full advantage of the electromobility developments that are happening within the Volvo Group.”

Another new feature of the HX2 is the inclusion of a vision system, which the previous HX1 did not have. The vision system is able to detect obstacles and humans within its vicinity, helping ensure safety for all on the job site.

Fully autonomous operation of the load carrier increases safety, as well, because it enables work to be completed in hazardous environments that might not otherwise be safe for humans to enter. In addition, it eliminates the potential for accidents caused by human error since the load carrier’s maneuvers are pre-programmed into its control system.

Other benefits Müller says the HX2 offers include a lightweight design, improved efficiency and load capacity. Energy efficiency is higher than that of a traditional load carrier not only through the use of electric drives but also due to the HX2’s ability to recuperate energy as it travels downhill. Load capacity to machine weight on the HX2 is twice as high as it is on a standard load carrier, he says, which enables more material to be carried in fewer passes—aiding both productivity and efficiency.

The HX2 is four-wheel drive with four-wheel steering which Müller says makes it an extremely maneuverable machine. In addition, it is capable of delivering the same performance whether it is moving forwards or backwards.

Modularly designed, the load carrier can be tailored to specific customer needs; if necessary, it could be built with two-wheel drive and two-wheel steering. “It’s vital that the machine is modular because it isn’t a one-size-fits-all solution,” says Müller. “The machine, controls systems, charging systems, etc. will need to be adjusted to customer needs.”

HX2 and the other concepts being developed for Volvo CE’s electric site research project are part of the company’s long-term future vision which Müller says have the potential to transform the quarry and aggregates industry. “Volvo CE is committed to pushing boundaries and exploring the technology of the future,” he says. “The HX2 and the electric site project demonstrate how Volvo CE wants to work with its customers early in the development phase to improve total site performance and sustainability while also saving customers money.

“By integrating customers in the development process, we can design the best solution for a task, application and environment together. The knowledge gained in the electric site project will be transferred to future Volvo CE development projects.”

Learn about the other Volvo machines at CONEXPO which were located in the Gold Lot at booth 3894 and the North Hall at booth 10036.

Volvo CE began its electric site project in 2015 and anticipates completion in 2018. It is working together with customer Skanska Sweden, the Swedish Energy Agency and two Swedish universities. Development and testing of the technologies, concept and prototypes are being completed in-house by Volvo CE. At the end of 2018, Skanska Sweden will incorporate the demonstration machines into its operations and test the site concept at a quarry in western Sweden for 10 weeks.

The company says the work is just research and there are no current plans for industrialization. However, it also says collaborating on a project such as this with customers, government and academia enables it to invest in new technologies and explore solutions that are relevant to its customers and address future challenges.

The Pace of Change is Increasing

These tanks are intended for use in the mobile generator industry.
Felling Trailers
August 23, 2022
Follow Us