A new report from IDTechEx indicates development of new materials for supercapacitors could help them take market share from batteries. 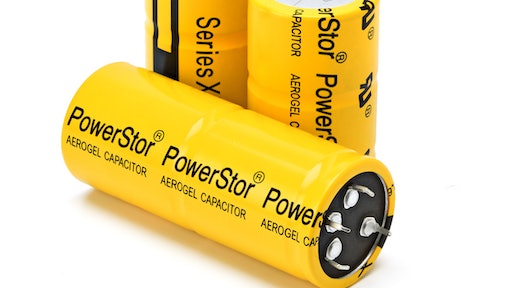 Eaton's supercapacitor modules can be paired with batteries to extend battery life in electrified vehicles.
Eaton

The new IDTechEx report, "Supercapacitor Materials and Formats 2020-2040" explains why supercapacitors and their variants still only constitute a modest business. It is largely because the lithium-ion battery has improved so rapidly and plummeted in cost, keeping supercapacitors in niches such as best reliability, longest life and fastest charge-discharge, but only where poor energy storage and self-leakage are tolerable.

However, it shows that this is starting to change mainly thanks to totally new materials and formats, attracting the contribution of far more researchers and the world's largest companies. Soon supercapacitors will compete head-on with batteries in far more applications but also "redefine the battlefield" to such things as edible and textile forms. The newly intense interest in faster charging and acceleration with electric vehicles and with creating bionic man and woman reads to the strengths of the new supercapacitors, leaving batteries "on the low ground".

Toyota, Volkswagen, the $100bn CRRC in China and other giants now see supercapacitors as a potentially large market and key enabling technology in their cars, buses and so on and the medical industry has supercapacitors in their sights. Materials will control the necessary improvements in performance and cost.

Raghu Das, CEO of IDTechEx, says, "Supercapacitors will have physical capabilities such as stretchable, biocompatible and biodegradable, where batteries struggle. To meet batteries head-on, researchers promise energy density of lithium-ion batteries 12 years ago with most other parameters magnitudes better than even future batteries. Imagine a supercapacitor bus, that only needs to charge at the depot and does it in seconds. Indeed, some fit-and-forget supercapacitor buses in China are promoted as having no recycling or reuse issues from the supercapacitors at end of life - no valuable materials and no poisons. They do not yet have sufficiently long-range for mainstream use, but several research programs are getting them there."

Das adds, "The trick is pivoting of supercapacitor research from flammable carcinogenic liquids touching burnt coconut shells, to such things as solid ionogels matched to graphene and carbon nanotube composites. That takes life beyond the current three times that of a lithium-ion battery to much more. An electric vehicle will have energy storage taking no weight or space because it has supercapacitor smart vehicle bodywork by Lamborghini, Geely, MIT, Imperial College London, a Japanese electronics giant and others optimising, integrating and shaping the new materials. Add non-toxic flexible and stretchable medical implants and patches, some using supercapacitor feedstock cut to shape as needed. They call that 'editable'. "

Increasing energy density involves maximizing useful electrode areas. Here the new choice is hierarchical or exohedral. Hierarchical refers to a monolithic material with a hierarchy of pore sizes as seen by the electrolyte. These electrode materials are currently made by pyrolysis of coconuts, melon rinds, wood, pine needles or fish scales to achieve various cost-performance compromises.

Exohedral refers to microscopic arrays of materials with wide-area surfaces, notably carbon allotropes like graphene and carbon nanotubes and recently other 2D materials such as metalorganic frameworks MOF in research. For both categories, rigorous synthesis may be too expensive in production. Carbon from carbide may also produce mixtures and impurities.

Advancements in Battery Systems Are Increasing

Increase efficiency by distributing the workload