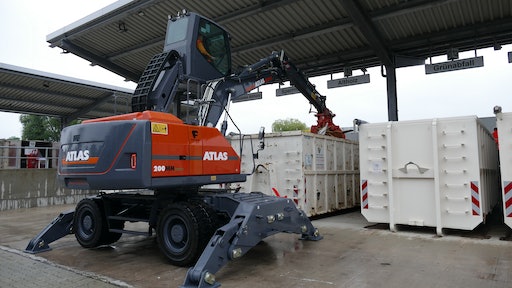 The Atlas 200 MH accu is used for waste compaction in Stadtreinigung Hamburg (SRH).

With the construction, manufacturing and delivery of the first battery-powered rehandling excavator 200 MH accu, Atlas GmbH of Ganderkesee has advanced to the forefront of technical innovation. The excavator has now been handed over to the Municipal Sanitation Department of the City of Hamburg (SRH). It can be seen in action at the recycling facility Liebigstrasse.

The ATLAS 200 MH accu features an operating weight of 21 t and a battery drive capacity of 140 kW/190 PS. Its reach amounts to 10 m and it is equipped with a demolition grab. The cabin can be extended to the driver's eye level up to 5.20 m.

The machine is not being powered by a diesel engine, but by four built-in battery modules with a total weight of 900 kg. They drive the hydraulic system and move the machine itself. Operating the excavator, therefore, does not produce any emissions.

A genuine milestone in technological development

“This is a genuine milestone in the history of Atlas. Our intensive development work has brought about real progress and this above all in the sphere of ecology,” says Brahim Stitou, CEO of Atlas GmbH. Quite a few people were involved in bringing about this success. The project’s initiator, Thomas Maas (Head of the Technical Service Department of SRH) contacted the regional distributor Atlas Hamburg. Reinhard von der Wehl, CEO of Von der Wehl Group, and above all Nils Schmuck (Distribution Construction Machinery at Atlas Hamburg) coordinated the project between all parties involved.

The company FRAMO GmbH of Loebichau was involved regarding the electrical components. FRAMO boasts long-standing and extensive experience in the field of propulsion of electrical municipal vehicles. This considerable experience was utilized in the speedy implementation of the ATLAS excavator project. Finally there were the engineers of Atlas GmbH who created the preconditions for the transformation of the ATLAS rehandling excavator 200 MH from a diesel powered into a purely battery-powered model. This is an immense step forward in product development.

Innovation in the most positive sense of the term

At the first glance one cannot see the change the ATLAS 200 MH accu has undergone. The four battery modules are installed where usually the diesel engine is to be found. The difference can however be heard immediately, as the 200 MH accu is significantly quieter than the 200 MH when driving and working. Upon the excavator’s devliery, Professor Dr. Ruediger Siechau, Managing Director of SRH, said: “The machine is not only quieter, but also emission-free. It saves annually more than 16 t CO2. Besides the reliable provision of services we also aspire to develop our fleet of vehicles in the spirit of environmental friendliness, sustainability and progressiveness.”

The installation of a charging station for direct current on the factory ground facilitates the machine’s successful completion of the desired working hours. The charging of the ATLAS excavator can therefore indeed be completed during breaks and afterwards it can proceed with its job. The operational test period is running now. SRH already plans to put a second battery-powered ATLAS excavator into operation by the end of the year.