The SEA-Drive 120a power system is being used in the 100% electric trucks for IKEA, which plans to have a zero-emissions truck fleet by 2025. 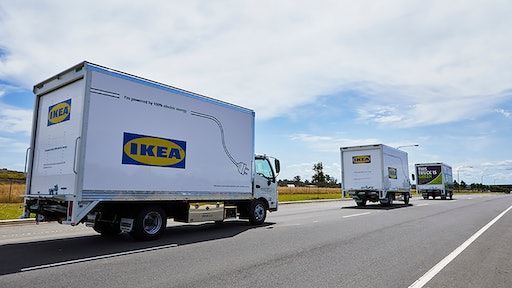 The new All Purpose Transport all-electric delivery truck is built on a Hino 917 glider with the SEA-Drive 120a power system.

Glen Walker, SEA Electric’s Regional Director of Oceania, says, “The 100% electric power system offers a range of up to 300 kms (unladen), zero emissions saving an estimated 36 tonnes of CO2 per annum when compared to a typical diesel equivalent, enhanced driver comfort and safety with little heat and noise, and reduced cost of total ownership.”

This is one of several recent vehicle electrification projects of which SEA Electronics has been a part. Earlier this year it announced the use of its SEA-Drive 100 power system with 100 kWh battery to power an electric tipper truck. The company's SEA-Drive 120b power-system with a 136 kWh battery capacity is utilized in a 100% electric bucket truck, also known as a an Elevated Work Platform Truck (EWP) or “cherry picker” truck.

IKEA is a corporate member of the EV100 group of companies joining the likes of DHL, Heathrow Airport, Hewlett Packard and Swiss Post.

Another IKEA fleet partner, Sydney-based ANC, has had three IKEA SEA Electric delivery trucks on the road for the past 10 months.

Tony Fairweather, SEA Electric founder and CEO, says he was privileged to be invited to the All Purpose Transport launch of the first 100% electric delivery vehicle deployed in Queensland. “The event was well represented by IKEA and many All Purpose Transport clients, as well as being supported by Queensland Government with Minister Mark Bailey (Queensland Minister for Transport and Main Roads) addressing the room.”

Fairweather says he was encouraged by the content of Minister Bailey’s speech, “with his acknowledgement of this fast transitioning segment and that Australia has been slow to adopt strategies to support it, however implying this would soon change.” A further discussion after the Minister’s address suggested that electric rubbish trucks should be (and will be) supported in Queensland and was interested in the current status of our activity with Brisbane City Council. “I am confident that this will be the start of many more electric commercial vehicles for Queensland.”