The battery-electric and fuel cell powered Class 8 trucks made the ascent up Pikes Peak, demonstrating the performance capabilities in tough operating conditions. 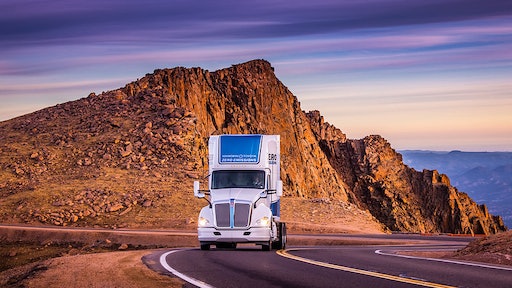 Electric trucks developed by Peterbilt Motors Company and Kenworth Truck Company recently reached the summit of Pikes Peak, one of the most famous mountain roads in the United States. The Peterbilt Model 579EV battery-electric Class 8 truck and Kenworth T680 fuel cell electric vehicle (FCEV) made the journey to the summit, demonstrating the performance capabilities of these electric powered vehicles.

Over the course of 3 days, Peterbilt's Model 579EV battery-electric Class 8 truck traveled to the summit several times. Peterbilt says in its press release about the achievement that this journey was made with ease. The company notes energy recovered from regenerative braking on the descent was used to recharge the truck's batteries to ensure it had enough power to make the ascent again.

"The performance of the Model 579EV while navigating to the summit of Pikes Peak was nothing short of amazing. Handling the 156 corners was made easier thanks to the lower center of gravity provided by the battery location on the 579EV," said Darryl Oster, Peterbilt Assistant Chief Engineer.

The Model 579EV is powered by Lithium Iron Phosphate battery packs capable of providing a range of up to 150 mi. (241.4 km) It is available in a tandem drive configuration with Meritor 14Xe e-axle motors which help power the truck. Peterbilt announced in November the truck was available for customer orders. It says the ascent up Pikes Peak provides further credibility to the vehicle being ready for the market.

The Kenworth T680 FCEV is a fuel cell powered Class 8 truck developed in partnership with Toyota Motor North America R&D. It made the ascent up Pikes Peak as part of a zero emissions performance demonstration.

Brian Lindgren, Kenworth Research and Development Director, notes in Kenworth's press release about the demonstration that although the elevation to the summit is just over 7%, there are several long sections with a 10% or higher grade. "The Kenworth T680 FCEV had plenty of power on the hill climb, performed well at extreme altitude, and exhibited excellent drivability through the 156 twisting turns and switchbacks," he said.

"The road to the top of Pikes Peak is a long and steady climb, so we were glad to see the Toyota-powered Kenworth T680 truck confirm our expectations and climb to the summit while delivering excellent performance and drivability," said Andy Lund, Chief Engineer, Toyota Motor North America Research and Development. "It’s another example of the capability of Toyota’s fuel cell electric drive system and we look forward to continuing our work with Kenworth to get Class 8 fuel cell trucks on the road."

Kenworth and Toyota Motor North America are collaborating on a program to develop a total of 10 zero emissions Kenworth T680 FCEVs with the Toyota hydrogen fuel cell electric powertrain for service with customers at the Port of Los Angeles.

Both the Peterbilt and Kenworth electric trucks used in these demonstrations have achieved over 100,000 mi. (160,934.4 km) of real-world operating miles to date, proving their ability to meet the varied needs of fleet operators. And as they continue to be utilized in real-world conditions like the journey to the summit of Pikes Peak, the OEMs will be able to gain valuable knowledge about their vehicles' capabilities and how to improve them further as they continue their electric vehicle R&D efforts.

Lori Ditoro, Editor of OEM Off-Highway, had the honor of speaking with 10 industry experts to get their insights about the challenges that the industry faced in 2022 and their expectations for 2023.
Feb 6th, 2023

The development and certification of autonomous driving applications for trucks is a challenge for which new approaches and methods must be introduced.
dSPACE
Jan 10th, 2023
Latest

Connectivity and telemetry are just some of the requirements to move to electrification.
Moog Inc.
Jan 6th, 2023

Choosing to power an engine with an alternative to diesel can decrease carbon dioxide emissions by up to 90%.
Lori Ditoro
Dec 13th, 2022

Brian Hazelton, senior vice president & president, talked with our team about the industry in 2022 and looks toward 2023.
Briggs & Stratton Commercial Power
Dec 4th, 2022

Nick Block, director, global marketing and sales, talked with our team about the industry in 2022 and looks toward 2023.
John Deere Power Systems
Dec 2nd, 2022

Reaching zero emissions will take time, and moving to electric is not feasible for all off-highway equipment today; new technology and much exhibited at CONEXPO meet OEMs where they are.
Lori Ditoro
Nov 29th, 2022

Learn about the new technology that has been added to the electrification product line.
Briggs & Stratton Commercial Power
Nov 9th, 2022

Take a look at this fun review from the largest show of 2022.
Caterpillar Inc. - Industrial Engines & Power Systems
Nov 1st, 2022

Thanks to the team at Komatsu for showing us their latest innovations at bauma2022.
Komatsu America Corp.
Oct 27th, 2022

At Hall A4, Stand 325, the company will display its latest products and sustainability components.
John Deere Power Systems
Oct 14th, 2022
Follow Us