Alastair Hayfield, Senior Research Director at Interact Analysis, evaluates how development of batteries and other electronic components for automotive are bringing down their costs for use in off-highway equipment. 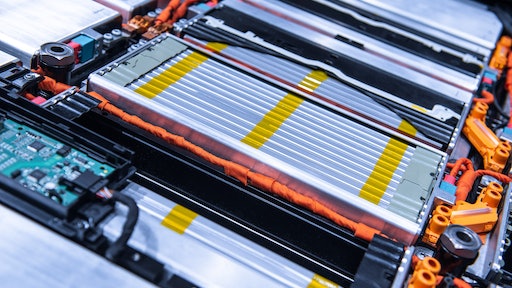 Battery prices are expected to decline at a rate of 7-10% per year out to 2030 due to their growing use in automotive applications.
©Sergii – stock.adobe.com

The good news: battery prices to decline by 7-10% per year

With any electric vehicle, it’s the price of the battery that determines whether it can compete in terms of total cost of ownership with an equivalent internal combustion vehicle. Overall, battery pack prices are falling, but batteries for large vehicles are still high-cost components. And battery prices for off-highway vehicles are substantially higher than in the automotive or on-highway commercial sectors. There are two reasons for this: the earlier mentioned difficulty in achieving economies of scale in such a small market, and the non-standard packaging or shape of batteries required for insertion into specialist machinery. Any non-standard product comes with a price.

But there is good news on battery pricing for off-highway equipment. Our latest research has found that the industry expects prices to decline at a rate of 7-10% per year out to 2030 as the already evident boom in the electric passenger car market drives down the cost of cells and demand for electric off-highway vehicles increases. But there are steps manufacturers could take to further speed up adoption of their solutions. Designing vehicles to take battery packs that are already produced in high volumes by the automotive industry is an obvious one. Using second-life battery packs is another, potentially highly cost-effective solution.

The inverter, or variable frequency drive, has been described as ‘the unsung hero of the drivetrain’. There are two types of inverter on an off-highway vehicle, one for traction, the other for work functions. Traction inverters usually have the higher power rating and heavy equipment such as bulldozers have the highest priced inverters, reflecting their high voltage and power requirements. These inverters can currently cost many thousands per unit, but their prices are continuing to drop significantly.

Inverters for light equipment such as forklifts currently sell for far less. Meanwhile, inverters for medium-sized machines (75-200 kW) rank between the two. All categories of inverters are predicted for price decreases as sales volumes of electric machinery increase, and again, vendors in the electrified off-highway market could well benefit from partnership with the automotive market, or even directly with major industrial inverter manufacturers, who are likely to be able to supply inverters at lower costs.

There isn’t much scope for price reduction in the market for small electric motors (below 25 kW) for light equipment such as forklifts. Electric motors are arguably already ‘commoditized’, and are produced in such large volumes that further increases in scale are unlikely to bring price advantages. The cost of these motors may, in fact, increase. That’s because they are metal heavy, and we are already seeing price increases for metals such as copper.

But, over the forecast period, we anticipate an overall price-drop of 1-3%. Larger motors used in heavy equipment such as big excavators offer the most scope for price declines. That’s because there is some scope for economies of scale as sales of medium and large electric machinery increase. And, as with batteries and inverters, OEMs may realize that, rather than manufacture their own, they can source cheaper and better motors from the established experts who are producing highly capable motors at rock bottom prices.