The electrical compressor is part of a fuel cell system that powers passenger shuttle buses in two of Shanghai's major airports. 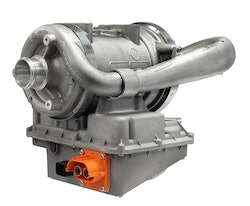 Liebherr's double stage electrical compressor is being used as part of a hydrogen fuel cell system in airport shuttle buses.

Liebherr's integrated electrical compressor is a crucial component of the PROME P390 fuel cell system that powers the passenger shuttle buses in two of Shanghai's major airports. The system received China's Compulsory Certification (CCC) earlier this year, and the Chinese government is committed to the promotion of this new technology — with a goal to have one million fuel cell vehicles by 2030.

Shanghai Automobile Group Co., Ltd., (SAIC Group) and Shanghai Airport (Group) Co., Ltd., signed an agreement where both parties will practice in-depth cooperation to strengthen the development and adoption of fuel cell vehicles. The companies will continue to explore the use of hydrogen fuel cell vehicles in many other applications beyond shuttle buses. The shuttle buses are only the first step toward innovation in greener transportation because the hydrogen fuel cell systems, according to the agreement, will be used for not only passenger transportation but also for ground support vehicles and road maintenance equipment.

To further develop the growth of hydrogen-powered vehicles, the companies will also jointly invest in a more robust infrastructure with more hydrogen refueling stations as well as charging stations to keep these vehicles running.

“The strategic agreement between SAIC and Shanghai Airport Group is yet another milestone in the industrialization of fuel cell vehicles in this region. Liebherr has been investing in fuel cell technology for the past 15 years, and we are thrilled to play a role in this innovative initiative by providing electrical compressors and associated power electronics for this system. With a range of 500 km and the ability to charge within minutes, these vehicles are a game changer; thus, we expect exponential growth in the horizon. We feel well positioned and are, evidently, extremely proud to contribute groundbreaking solutions toward greener technology,” says  Francis Carla, CTO Liebherr-Aerospace & Transportation SAS.

Liebherr-Aerospace Toulouse SAS (France) is responsible for the design and development of the compressor units, which are crafted to be fully eco-friendly — since they power fuel cell propulsion systems with emissions of only water and heat. Fewer emissions result in better air quality and aid in the movement for safer and more environmentally focused transportation.

Production of the units will primarily involve Liebherr-Aerospace Toulouse SAS (France), Liebherr's center of competence for air management systems, together with Liebherr-Elektronik GmbH (Germany), Liebherr's center of competence for electronic hardware. The assembly and testing will be transferred to Liebherr (China) Co. Ltd., in Shanghai and beginning 2021, the units will be assembled in the Aerospace division's workshop.

Cummins discusses its battery, hydrogen and engine system developments and how they will continue to advance in the off-highway equipment industry.
Sara Jensen
December 14, 2021
Follow Us