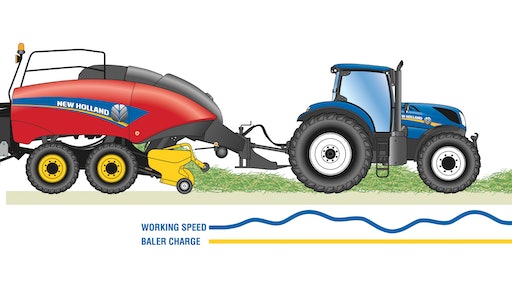 New Holland announces in-cab density control and variable core adjustments in model year 2016, Roll-Belt Series Round Balers. This technology allows operators to change the density pressure setting using the monitor inside the tractor cab for easier operator interface and convenience. Additionally, independent density values can be achieved in the bale core and outer bale. Customers that desire to have a lower density core for easy feeding and movement, or to allow the bale to “breathe” in high-moisture conditions can achieve two separate density values for the core and outer bale. If customers choose to store outside hay longer than normal due to plentiful supply then choose a higher outer bale density to increase water shedding ability.

The operator can also determine the size of the core for additional customization. Density pressure and core diameter settings are adjusted in the Bale Command II Plus User Settings Menu or if the baler is equipped with ISOBUS capability, these settings can be adjusted using the IntelliView touchscreen.

New BigBaler 340 Standard and BigBaler 340 Rotor Cutter models offer IntelliCruise Feed Rate Control System with two modes of operation: Charge Control (Rotor Cutter Only) or Slice Control (Standard or Rotor Cutter). IntelliCruise is operated with the new, ISOBUS Class III compatible T7 AutoCommand tractor as an optional feature that helps operators achieve a constant feed rate or flake thickness while baling. Since most fields have varying crop yields, resulting in inconsistent swaths, it makes it difficult to maintain a constant feed rate. The IntelliCruise system allows the baler to run at optimal performance by controlling the speed of the tractor.

The IntelliCruise system when operated in Charge Control automatically matches the tractor’s forward speed to crop load at the BigBaler. A charge sensor on the stuffer constantly monitors the bale charges, or slices, delivered to the bale chamber. The system measures the demand placed on the baler (from crop yield) and adjusts tractor forward speed for optimal crop feeding. In areas with lighter crop, forward speed automatically increases so operators consistently work at the capacity specified.

When operated in Slice Control, tractor speed is adapted based on slice thickness to strive to obtain a user defined amount of slices.

Using the IntelliCruise system results in dramatically reduced fatigue because fewer operator interventions are needed, up to 9% higher capacity and productivity over an inexperienced or fatigued operator, and lower fuel consumption for lower production costs.

Another new feature on the BigBaler Series is the Crop RFV System. Using the Crop RFV system allows operators to measure the Relative Feed Value of their crop as it is being baled. The system measures the weight of the bale and the moisture content to calculate the leaf-to-stem ratio of the alfalfa crop. The leaf content relates directly to Acid Detergent Value (ADF) and Neutral Detergent Value (NDF). The lower the ADF and NDF, the higher the RFV.

When used with the CropID system, each bale will be tagged to show the RFV, Total Digestible Nutrients (TDN), and Moisture Content (MC%) making it easy for operators to see how the value measured in the field compares to lab analysis of actual core samples. Crop RFV can also be paired with a dye marker kit as an economical option to mark bales with a user set RFV range for easy identification and sorting.

The Speedrower Self-Propelled Windrower’s CommandGrip Multi-Function Handle will also see an upgrade during the model year to enhancing ergonomics in haying applications. The button sensitivity has been improved to require less force to activate header control functions, the header control and reel buttons have been rotated slightly for better access relative to hand placement, and the stalk of the handle has been shortened to provide easier transition with the adjacent finger rail.