GKN Hybrid Power has won the 2015 Dewar Trophy for its Gyrodrive technology which has been implemented into bus applications. 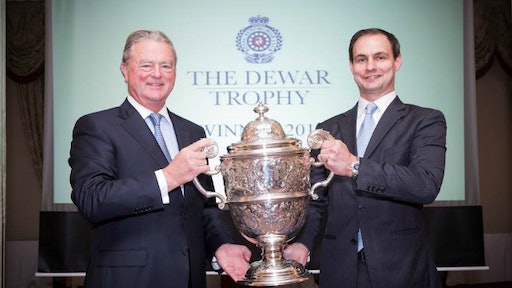 The Royal Automobile Club has announced that GKN Hybrid Power is the 2015 winner of the prestigious Dewar Trophy.

Arguably the most prestigious honors in recognition of home-grown British automotive engineering talent, the Dewar Trophy is only awarded in years when the Royal Automobile Club’s Technical Committee deems there have been contenders of sufficient merit. This is one such year.

Following a visit to GKN Hybrid Power’s facility in Abingdon in July, the judging committee chose back in early July for the development and application to buses of Gyrodrive technology.

Awarding the 2015 trophy to GKN Hybrid Power was a unanimous decision for experts on the Royal Automobile Club’s Technical Committee, chaired by John Wood MBE. Previous winners of the Dewar Trophy, which has a lineage dating back to 1906, include Rolls-Royce in 1907 for its 40.5 hp engine; the British Motor Corporation and Alec Issigonis for the original Mini in 1959; McLaren in 2013 for the P1 and Mercedes AMG High Performance Powertrains for the 2014 PU106A Hybrid Formula One power unit.

Receiving the Dewar Trophy, Gordon Day, General Manager, GKN Hybrid Power, said, “It is a great honor to be recognized for such a prestigious award. Our work to drive forward development of our electric flywheel energy storage technology – from motorsport to mainstream transportation – is something of which we are particularly proud. The team at GKN Hybrid Power is committed to continued evolution of our core technology, and to meeting the challenges of delivering this innovative solution for reducing emissions and increasing fuel efficiency across transport industry networks.”

The Dewar Trophy was presented to Day for his team’s development and application to buses of Gyrodrive – a motorsport-derived technology that delivers fuel and emissions savings in multiple commercial applications including buses, trucks and trains.

The first commercial application has been in buses across several UK cities, delivering greater fuel efficiencies to the tune of around 20%, alongside reduced vehicle emissions. This same technology offers affordable efficiency gains across a wide range of future applications, with the simple principle that the energy storage flywheel, which sits at the heart of the technology, is able to convert energy traditionally lost as heat into recyclable rotational kinetic energy.