Nikola One is an electrically driven Class 8 truck capable of pulling a gross weight of 80,000 lbs. and traveling over 1,200 miles between stops. 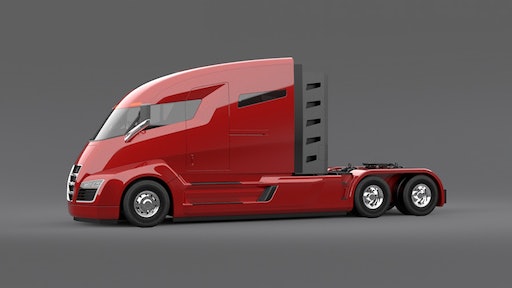 Nikola (pronounced Neek-oh-la) Motor Company (NMC), announces that it has designed, engineered and is finalizing assembly of the first-ever, electric-driven Class 8 semi-truck, dubbed “Nikola One”, which is capable of pulling a total gross weight of 80,000 lbs. and offering more than 1,200 miles between stops.

Nikola One incorporates a new proprietary independent suspension system, based on Meritor’s all-wheel drive ProTec High Mobility Independent Suspension product line. As the first Class 8 vehicle to offer a fully independent suspension, drivers will experience premium ride quality and reduced vibration, minimizing driver fatigue. The unique steering geometry achieves a new standard in tracking, centering feel and intuitive feedback, allowing drivers to focus on the road ahead. These benefits to the driver’s precision and comfort are achieved through a tightly controlled suspension geometry, reduced weight of the unsprung components attached to the wheels and air spring dampers with position sensitivity.

Most of the Nikola One’s heavy components sit at or below the frame rail, thereby lowering the center of gravity and improving safety. This was partially accomplished by removing the diesel engine and transmission and manufacturing the cab out of lighter, but stronger, carbon fiber panels. Benefits of removing the diesel engine include a drastic reduction in greenhouse gas emissions, a larger and more aerodynamic cab and a significantly quieter and more comfortable ride. All that is necessary to make the Nikola One go or stop is the electric pedal and brake pedal (no shifting or clutches). The Nikola One’s simplified operation will open up the line haul market to a whole new group of drivers.

Battery and Range Extender – The Nikola One’s electric motors are powered by a liquid cooled 320 kWh, lithium-ion battery pack (over 30,000 lithium cells), which is charged by a proprietary onboard Nikola Motor Company turbine. The turbine automatically charges the batteries when needed and eliminates the need to ever “plug-in.” The turbine produces nearly 400 kW of clean energy, which provides ample battery power to allow the Nikola One to climb a 6% grade at maximum weight at 65 mph. A typical Class 8 diesel truck under similar conditions would have a hard time reaching 35 mph. And going downhill, the Nikola One’s six electric motors absorb the braking energy normally lost and deliver it back to the batteries, increasing component life, miles per gallon, safety and freight efficiencies while eliminating noisy engine brakes and reducing the potential for runaway trucks.

When compared to a typical Class 8 diesel, the Nikola One’s turbine is much cleaner and more efficient. The turbine is also fuel agnostic, meaning it can run on gasoline, diesel or clean burning natural gas.

Torque Vectoring – Because there is an electric motor at each wheel, the Nikola One’s software provides dynamic control to each wheel. This is called “torque vectoring” and it is accomplished by controlling the speed and torque of each of the six wheels independent of each other at any given moment. This first ever, 6x6 torque vectoring hardware and software system will allow for safer cornering, double the stopping power, improved traction, less tire wear and longer component life over current Class 8 trucks. Torque vectoring technology is not available with a conventional drivetrain powered by a diesel motor.

Cab Features - NMC has designed a truck with the driver in mind that boasts a 30% larger cab, while increasing aerodynamics and reducing the co-efficient of drag by nearly 5% over current trucks on the market. The Nikola One’s cab features a patent-pending sliding mid-entry door for improved access and driver safety, a full-size fridge and freezer, electric climate controlled cabin, 15 in. touchscreen infotainment display, 10 in. instrument cluster display, 4G LTE internet and Wi-Fi, over the air software updates, panoramic windshield, sunroof, two full size beds, microwave and 42 in. television. All of these features will be powered by the 320 kWh battery pack, alleviating the need to idle or run a separate generator. The Nikola One’s cab is by far the most spacious and comfortable cab on the market and its offered amenities are a first for line haul drivers and fleets. The driver could theoretically stay in the cab with all the amenities on for almost a week without draining the batteries enough to initiate the turbine charge.

Fleet Convoy & Virtual Hitch– The Nikola One’s proprietary hardware and software have unmatched compatibility with the future of driverless vehicles. Once testing is complete and government regulations allow, a single Nikola One driver will have the ability to “virtually” hitch and lead up to five driverless Nikola One trucks through NMC’s wireless vehicle network and self-driving technology. This technology could solve the driver shortage and increased freight costs facing the long haul transportation industry. The Virtual Hitch/Fleet Convoy technology designed by NMC is under development and will be introduced in the marketplace in the next few years. Technology advancements like these could triple the income of owner operators and change the income inequality found in the industry between owner operators and fleets.