Replacing the traditional diesel engine and transmission with an electric powertrain enabled one manufacturer to develop a more aerodynamic and fuel efficient Class 8 truck. 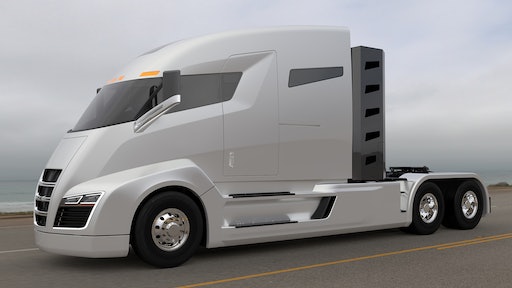 Similar in design to a bullet train, the shape of the cab is designed to cut through the wind and reduce aerodynamic drag by 5% or more.

Electric operation is enabled by the use of an 800V AC electric motor, developed by NMC, paired with a gearbox at each of the truck’s six wheels. According to the company, the six electric motors provide instant torque, 96% efficiency and are capable of producing better horsepower, acceleration, pulling and stopping power.

Software within Nikola One provides dynamic control to each wheel through torque vectoring, or independently controlling the speed and torque of each wheel. Communication with each motor occurs up to 30 times a second, allowing for safer corning, improved stopping power and traction, less tire wear and longer component life.

Power is provided to the motors by a liquid cooled, 320 kWh lithium-ion battery pack designed by NMC. “It has the highest energy density per battery pack pound of any other battery system on the market,” says Trevor Milton, Founder and CEO of Nikola Motor Co., and is similar in design to the battery used in Tesla cars. However, he says the NMC battery is able to provide more energy per pound because it is not part of the chassis structure as is the case with the Tesla.

Instead of plugging the truck in, the battery is charged by an on-board turbine, developed specially for NMC, which is capable of producing about 400 kW of energy. Battery charging is done automatically; the Nikola One’s electronic control unit (ECU) monitors the battery’s state of charge, signaling the turbine to turn on and recharge the battery when necessary without any input from the driver.

The fuel-agnostic turbine allows customers to choose the fuel that best fits their operational needs, whether it’s gasoline, diesel or natural gas. The 100-gal. natural gas fuel tank has a range of about 800-1,200 miles (1,287.48-1,931.21 km) before refueling is necessary. The turbine burns at 40% thermal efficiency, says Milton, enabling it to provide double the efficiency of a diesel motor. He also notes that the physics involved with burning fuel through the turbine, as opposed to using compression as a diesel engine does, make it a cleaner energy-producing technology.

Battery charging is also aided by the electric motors, which can absorb braking energy that would otherwise be lost as the truck travels downhill. In addition, this capability helps decrease component wear and eliminate noisy engine braking for which many communities have regulations.

Milton says that by replacing the engine, emissions equipment and transmission found on a typical Class 8 truck with the six motors and gearboxes, NMC was able to redesign the chassis from the ground up. The company was able to lower the truck’s center of gravity and put the majority of the heavy components at or below the frame rails. “This allowed us to engineer a better handling truck with an independent suspension,” he says.

NMC worked together with Meritor Inc. to develop the truck’s short long arm (SLA) suspension. While other trucks have a solid differential that can make driving uncomfortable, Milton says the SLA is similar to that used in a car; it absorbs impact independently from each wheel to provide a more comfortable ride. “It is the first of its kind in the over-the-road industry, allowing for a smooth ride and better handling,” he says.

Removing the engine, aftertreatment system and transmission also enabled overall vehicle weight savings. The company says its truck weighs thousands of pounds less than the average Class 8 truck, helping reduce the amount of energy necessary to drive the truck. NMC estimates the cost of driving its truck to be 20-30 cents per mile whereas it costs 40-60 cents per mile for a diesel truck.

The need for clutches and shifting are eliminated, as well with the Nikola One; an electric pedal and brake are all that is necessary to drive the truck, simplifying operation and reducing the learning curve for new drivers.

No longer having an engine at the front of the truck allowed for a completely new tractor and cab design with improved aerodynamics. Similar in appearance to a bullet train, the truck is aerodynamically optimized to provide a lower drag rating, which helps improve fuel efficiency. “The cab was designed to cut into the wind and significantly reduce the drag by more than 5%, while enlarging the living space of the driver by 30%,” says Milton.

The lack of a diesel engine significantly reduces emissions output while also providing a quieter and more comfortable driving experience for operators.

Inside the cab, NMC included numerous comfort features such as a two full-size beds, a microwave and 42-in. (1.07 m) television, 11 cu. ft. (0.311 cu. m) refrigerator/ freezer, 15-in. (0.38 m) touchscreen infotainment display and a 10-in. (0.25 m) instrument cluster. Wi-Fi and 4G LTE internet are included as well as the capability for over-the-air software updates. All electronic features within the cab are powered by the battery pack. While the cab is larger in size, it was manufactured using lighter, stronger carbon fiber panels to help mitigate any potential weight gain.

Once production of the Nikola One begins, the entire vehicle, except for the suspension, will be built in-house by NMC.

Driving into the future

Over the next few years the company is also looking to take further advantage of the growing trend towards driverless vehicles. As part of this, it is working on technology that will allow up to five Nikola One trucks to be virtually “hitched” to one another in a convoy (also known as platooning) via the company’s wireless vehicle network.

The Virtual Hitch/Fleet Convoy technology allows the first vehicle in the convoy to lead all other vehicles hitched to it; all of the vehicles follow the same maneuvers as the lead vehicle similar to the leader-follower concepts are already used in mining and military applications. This technology is anticipated to help with the driver shortage facing the trucking industry as only one driver is needed in the lead vehicle to control all of the other trucks. It is still under development at NMC, but Milton says the company should be able to roll out the technology within 3-4 years after production of the truck begins. There will also be a few hurdles to overcome such as government regulations and market acceptance and adoption.

Additional market applications for the Nikola One technology could be possible in the future, as well, says Milton, including the off-highway equipment industry.

The company also has plans to build 55 strategically positioned compressed natural gas (CNG) refueling stations across the U.S. and Canada, with more stations planned for the future. This will help further grow North America’s CNG infrastructure to ensure drivers will be able to find refueling stations along their routes. NMC owns several natural gas wells in the U.S. which it will use to provide fuel for its CNG stations, helping control the cost of the fuel as it is sourced and supplied by a single company.

Nikola Class 8 Trucks to be Powered by Hydrogen Fuel Cells