Bendix has begun producing Driver Control Modules at its facility in Mexico which was updated with an advanced assembly line and operator training. 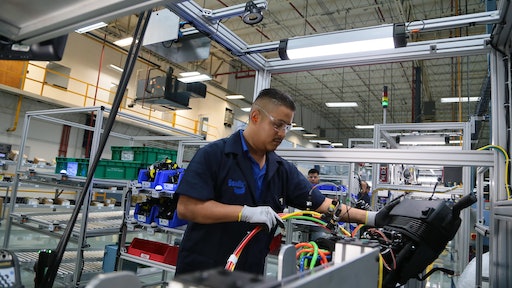 Following a $4.6 million investment and an intense planning effort that began in 2014, this month Bendix began to produce driver control modules (DCM) on an advanced new assembly line at its Acuña, Mexico, manufacturing campus.

The modules are built for Navistar Inc., and will be used in medium-duty, Class 8, and military vehicles. Bendix expects to produce up to 60,000 DCMs annually.

Bendix is a leader in the production of commercial vehicle modules, which are complex pre-manufactured, pretested subassemblies. The driver control module is an assembly of vehicle control systems – the most safety-critical components of the vehicle – including the steering column, brake, clutch, accelerator, valves, and air tube and electrical harnesses.

At the Acuña facility, Bendix invested in sophisticated production line technology, trained operators extensively for the high-tech assembly process, and added stringent new quality measures. When the first DCM came off the line on October 3, it inaugurated an operation designed for custom ordering and just-in-time delivery – in alignment with Navistar’s manufacturing process.

Bendix relocated manufacturing of the DCM from the original line located at its manufacturing operation in Huntington, IN, which had produced the modules since 1999. The new assembly line contains many updates. The company’s Acuña campus, which opened in 1988, is near a Navistar manufacturing plant, where the majority of the DCMs will be shipped. The relocation and updating are consistent with Bendix’s commitment to optimize its manufacturing locations, better serve its customers, and continually reinvest in its business.

“The new driver control module operation advances the efforts of our dedicated Huntington team and represents the next strategic step forward in our modules business,” says John Kemer, Bendix Vice President and General Manager, Controls and Modules Group. “It strengthens our long and successful DCM manufacturing partnership with Navistar, continues establishing the high-tech production capability of our Acuña facility, and meets our customer’s need for feature-based ordering and just-in-time delivery.”

Investment in the Future

The centerpiece of Bendix’s $4.6 million investment is the company’s first-ever production line utilizing automated guided vehicles (AGV), which transport components from the kitting area and from station to station. AGVs allow for flexibility in the line by simple changes in the magnetic tape that guides the vehicles on the floor.

DCM production complements the full range of product manufacturing already in place at the Acuña campus, including antilock braking systems, air dryers, compressors, valves, actuators, and remanufactured components. Adding a sophisticated assembly line for the driver control module continues the evolution of the facility to a center for high-tech production.

Established in May 1988, the Acuña manufacturing operation is part of the North American presence of Bendix, which operates facilities in the United States, Mexico, and Canada. The campus currently consists of three state-of-the-art facilities that employ more than 1,400 workers and encompass 412,000 sq. ft. Acuña is one of the fastest-growing Bendix manufacturing sites, and executives of Bendix’s parent company, the Knorr-Bremse Group, consider it a model manufacturing facility. Knorr-Bremse honored the Acuña operation as its top-ranked plant worldwide in 2011.

No Room for Error

Production of the driver control module is based on just-in-time delivery and feature-based ordering. The process is challenging, as each of the highly complex modules averages 140 components; 10 feature groups, such as the steering column and accelerator; and 650 individual features. All of the DCMs going down the line at any one time might differ from each other. To succeed at just-in-time delivery, every facet of the operation – from materials to shipping – must be without error.

With the strict demands of DCM production in mind, Bendix invested in extra quality measures. Among them are the addition of 60 poka-yokes (mistake-proofing devices, including cameras, color checks, sensors, and pressure monitoring) for a total of 183.

Bendix also implemented an extensive plan for training and early hiring of operators. Training included time at the location of the assembly line supplier.

The DCM is one of many module solutions produced by Bendix. Others include bus door activation modules, pedal boxes, and front/rear axle modules.