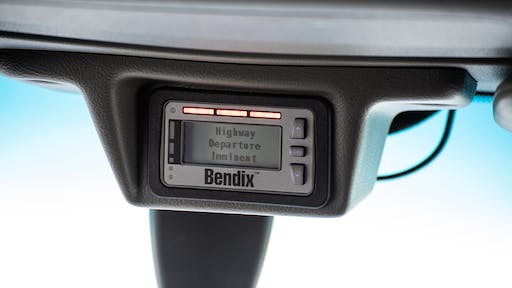 Even the safest professional driver knows it: There’s no limit to the number of things that can unexpectedly go wrong on the road.

To help drivers deal with more of those uncertainties than ever, the newest generation of Bendix Wingman Fusion, launched by Bendix Commercial Vehicle Systems LLC, adds highway departure braking, ACB (Active Cruise with Braking) Stop & Driver Go, ACB Auto-Resume, and multi-lane emergency braking to its features, along with even more enhanced collision mitigation and braking capabilities.

“As the North American commercial vehicle market’s first and only deeply integrated radar-and-camera advanced driver assistance system (ADAS), Fusion continues to build on the combination of proven technologies paving the way toward an increasingly automated future of safer vehicles and roadways,” says Fred Andersky, Bendix Director of Customer Solutions – Controls. “Brake sensors, cameras, and radar units all provide different, valuable types of information – all of which are combined and cross-checked to create a detailed and accurate data picture. What has always kept Fusion at the leading edge of safety and driver assistance is its integration of information from multiple sources working together, and not just in parallel.”

A number of the new features of Wingman Fusion are the result of software advancements, so current system users will be able to upgrade and unlock the new capabilities without having to purchase new hardware. In the future, the new generation of Bendix BlindSpotter, also announced by Bendix, will see integration into the Wingman Fusion system, as with other sensors and safety technologies, such as steering and park brake control.

The next-generation enhancements enable Fusion to now provide full braking power on the tractor, compared with the two-thirds power previously possible, along with pulsing air back to the trailer to provide trailer braking, whether or not the trailer has an ABS/TRSP unit. Combined with improved sensor and data analysis, this means that in many emergency situations, the system can reduce a vehicle’s speed by as much as 50 mph.

With the new multi-lane automatic emergency braking feature, if Fusion is applying the brakes due to a vehicle in the lane ahead and the truck driver switches to an adjacent lane, the system will continue applying the brakes if it detects another car ahead in the new lane – helping the driver avoid both the first and potentially second situation, something that can occur when multiple lanes of traffic are blocked on a highway.

ACB Stop & Driver Go is a low-speed approach to adaptive cruise control for traffic situations. Offering additional convenience, it allows the driver to resume cruise control after braking to a stop without the need to push the resume switch.

The ACB Auto-Resume functionality reengages cruise control after Fusion brakes the vehicle above a certain speed threshold. Today, if the system brakes, the cruise control disengages. With ACB Auto-Resume – a feature of Bendix’s next-generation Fusion system – a driver won’t have to resume cruise if the system brakes and certain parameters are met.

The bounty of data provided by Wingman Fusion – generated by the brake sensors, camera, and radar – is particularly valuable to a fleet’s back office. Another Bendix solution, the SafetyDirect by Bendix CVS web portal, is available to capture that data and then, using a fleet’s telematics system, automatically transmit driver performance and event-based information – including video. The tool provides a wealth of knowledge that can further help fleet managers and drivers strengthen safety.

And like the current generation, the forward-facing camera of the newest Wingman Fusion is powered by the Mobileye System-on-Chip EyeQ processor with state-of-the-art vision algorithms.

Hitting the Road, Making a Difference

Most major North American truck brands offer Fusion as standard on their highway tractors, including Kenworth Truck Company, Peterbilt Motors Company, and Mack Trucks. Volvo Trucks North America offers Volvo Active Driver Assist – which is based on Wingman Fusion – as standard on its VNL and VNR series tractors. Fusion is also offered as standard on the Kenworth T680, Peterbilt Model 579, and the Mack Anthem. On Navistar’s International highway tractors, Fusion is an option over the standard Wingman Advanced system.

Over the past 3 years, North American fleets equipping Fusion have reported significant reductions in rear-end collisions – as much as 90% – and decreased severity of those that did occur. The men and women behind the wheel share positive feedback, including higher satisfaction with radar-and-camera assistance systems than with radar-only technologies – especially in terms of false alerts and interventions. This isn’t surprising, as more information about a situation, delivered into the system by two sensors instead of one, typically enables a more accurate reaction to a specific situation. Fusion’s extensive data also empowers improved driver training efforts.

“The new Wingman Fusion does more and performs better, with no need to accommodate new hardware,” Andersky says. “This upgrade is an ideal reflection of the Bendix approach to these technologies, which envisions each step as a foundation for the next – an ever-expanding platform of software, sensors, and system integration to build even more potent vehicle and highway safety systems to help drivers navigate more situations safely. The more sensors we integrate, the more information the system gathers about the vehicle and its surroundings – and all that data is the key to the system’s decision-making process when it comes to keeping drivers safe.”

Bendix emphasizes that no technology can replace a safe, alert, professional driver practicing safe driving habits, supported by proactive, ongoing driver training. Active safety systems like Bendix Wingman Fusion are not intended to enable or encourage aggressive driving, and responsibility for safe vehicle operation remains with the driver at all times.

Through its ever-growing portfolio of safety technologies, Bendix delivers on areas crucial to the success of fleets and owner-operators: safety, reliability, lower total cost of ownership, and vehicle performance and efficiency. Bendix backs its systems and components with unparalleled post-sales support, aiming to strengthen return on investment in equipment that improves commercial vehicle safety and makes North America’s roads safer for all who share them.

Also, while the next-generation Wingman Fusion system offers a broader set of features, as with the current Fusion system, not all truck manufacturers may offer all features. It’s important for fleets to check with their OEM regarding the features that are available on their Wingman Fusion offering. This may also impact which features are readily available through upgrades for current Fusion-equipped vehicles.