The documentary series aims to bring greater awareness to automation and technology in the construction and agriculture industries. 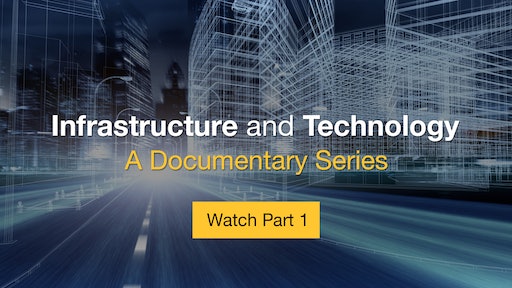 Topcon Positioning Group announces a new series of documentary videos designed to bring greater awareness to automation and technology in the construction and agriculture industries. Along with thought leadership from Topcon, the documentaries feature interviews with various tangential industry experts and business representatives — including comments from Intel Corporation, SAP, Solar City Corporation, among others — offering their perspectives on how technological advancements have changed infrastructure and what to expect going forward.

Jackie Ferreira, Topcon Positioning Group director of corporate communications, says, “We wanted to take a partnership approach to the video series to feature industry experts along with our visionary thoughts at Topcon. The infrastructure industry is changing quickly, and this video series highlights how this advancement is part of a larger story of technology changing the paradigm everywhere. To stay on top, businesses will need to adopt automation and new technology.”

An introduction to the series will be featured at the Association of Equipment Manufacturers’ annual conference taking place November 28 – 30, 2018.

The series was filmed globally in the U.S., the Netherlands, United Kingdom, and Germany.

Volvo CE's EC55 Electric excavator will be used for a customer pilot in China, Volta Trucks names a new CEO and more news from the past week you may have missed.
Sara Jensen
Apr 14th, 2021

The companies will integrate Plus' autonomous driving technology into IVECO heavy-duty trucks, including those powered by LNG and biomethane.
CNH Industrial N.V.
Apr 12th, 2021

A new report from Fact.MR indicates the U.S., Germany and Japan will be among the top markets for autonomous agriculture equipment.
Sara Jensen
Mar 26th, 2021

The new test and demo area will include a secure track for full-electric, automated and teleoperated machines with charging infrastructures and 5G connectivity.
Volvo Construction Equipment
Mar 4th, 2021

The acquisition will aid Toro with its autonomous capabilities and technology strategy.
The Toro Company
Mar 2nd, 2021

Controller modules deliver rugged and robust outputs for auxiliary functions for off road vehicles. Check out the all new CM2723 today.
Apr 5th, 2021

Automation technology is here, and being applied in a broad range of heavy equipment and applications.
Sara Jensen
Feb 9th, 2021

Research and development for autonomous vehicles which operate on public roadways is expanding in the bus and heavy truck segment.
Sara Jensen
Feb 8th, 2021

Development of new components are increasing the safety and performance of autonomous vehicles and systems.
Sara Jensen
Feb 5th, 2021

Scania will work with TuSimple to test the use of Level 4 autonomous technology.
Scania AB
Feb 3rd, 2021
Smart Systems