Liebherr's Mobile Communication Gateway connects data sources in vehicles, reads the information via CAN and Ethernet interfaces and optimizes data for transmission into the cloud. 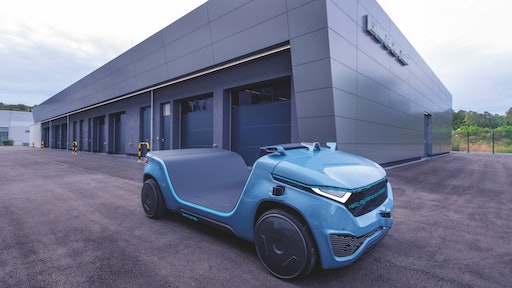 The MCG is used as the central communication interface in HARRI, the autonomous carrier vehicle.

The basis for the digitization of HARRI is the local pre-processing of vehicle and environmental data – the so-called edge computing. The freely configurable, powerful and robust telematics hardware enables edge computing, as well as data transfer to the cloud.

The IoT gateway from Liebherr Components, that is developed and manufactured on site in Lindau (Germany), is deployed in HARRI. The MCG connects the data sources in the vehicle, reads the information via CAN and Ethernet interfaces and pre-processes them. In this way, it ensures the data optimization before the transfer into the cloud. The MCG is referred to as CDC (Connectivity Domain Controller) in HARRI’s vehicle architecture. Bertrandt used Docker containers to display the application layers on the CDC. Such a structure helped to ensure the security aspects and to implement software updates over-the-air (FOTA).

“We opted for the MCG, since the gateway is highly robust and offers extensive scope for development. There are not many suppliers, who offer such a robust system,” says Wolfgang Darge, Project Manager at Bertrandt.

Based on the Linux operating system and the fully configured Yocto build system, the MCG is freely programmable, providing extensive scope for individual applications, such as over-the-air software updates.

“As the gateway also fulfills the requirements of protection class IP5K2, it is ideal for the very demanding operating conditions of mobile machines – temperatures up to 70 C, dust and vibration,” explains Martin Lorenzen, Project Manager at Liebherr-Elektronik GmbH in Lindau. The telematics units receive the final touch at the in-house Liebherr Components Test Center, also in Lindau, where they are extensively tested.

The MCG sends and receives vehicle-relevant data via two antennas. Correctly installed, two antennas can significantly improve the connectivity of the machine. This is especially true of areas with poor internet connection. To assess the actual improvement, Liebherr performed its own tests. Thereby, the quality of the MCG network connection with one and two antennas was tested over a pre-defined route in a rural area with poor internet connection and interchanging cellular networks over a period of one week.

Antenna diversity is particularly useful, when a vehicle is moving through areas with poor mobile network connections. Larger vehicles in particular benefit from it, as two antennas help to overcome the problem of an interrupted connection through in-vehicle shadowing.

As a conclusion, antenna diversity ensures better connection quality and better availability. HARRI benefits from it, too.

Navistar announced the standardization of a factory-installed telematics device on all new builds of Class 6 to 8 International Truck and IC Bus vehicles, including electric models.
Navistar International Corp.
March 14, 2022
Follow Us