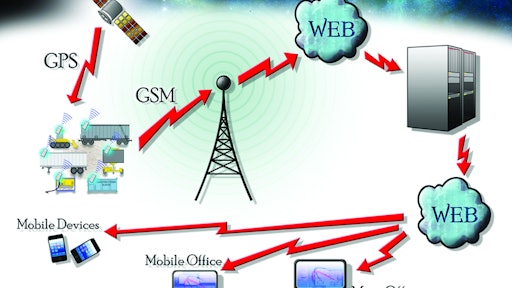 Why ‘track’ assets? Haven’t people and companies always kept track of things that they own?

Well, not exactly. For many years, even decades, asset tracking was not high on the list of priorities for businesses in America and the Western world, in general.

Today’s asset tracking technology, in the form of Telematics technology, does more than tell a company where its trucks or shipping containers or backhoes are at any given time. It also builds efficiency into an entire system, reduces loss and waste, and overall saves millions in what would otherwise be lost profits. But it was not always this way.

In the early 1980’s, businesses in the industrialized countries had developed a knack for discarding many different types of things, from machinery to vehicles to whatnot, when these items either broke, or we perceived them as obsolete. This behavior was mostly fed by the rate at which new, cheaper and more feature-rich products were introduced to the market. The common wisdom was that there was no need to repair something when it could be replaced, for less cost, with an up-to-date, more powerful, faster, product with more bells and whistles than the original.

The ‘throw away and replace’ attitude percolated into our business actions. We replaced needs with wants, and we became more likely to take a time/cost/feature approach towards capital expenditure and assets. But this was back when money was plentiful, before the current financial crises suddenly forced companies around the globe to change their attitudes. In many ways, it was a paradigm shift in thinking. Companies forced into survival mode began counting dollars and counting assets.

But as companies quickly learned after business got tight, all those small discarded pieces, in the aggregate, add up to big dollars. Consider shipping containers, for example. Worth a few thousand apiece; abandoned once, here and there, these objects now represented assets that companies could not afford to throw away like a plastic soft drink cup. The same was true for empty rail cars, lost, misplaced, or ignored; when the tracks connecting them to rail lines were dismantled, the cars were left where they stood, since trying to transport these heavy cars without tracks was impossible, or prohibitively expensive. The owners could afford to write them off. But it’s a different world now. Additionally, asset tracking means a lot more than simply knowing where your products or rail cars or assets are; a basic telematics device, mounted inside a shipping container or a rail car, will constantly reveal the location of that asset, but the science has evolved far beyond that. Now, asset tracking involves knowing not only where your assets are at, but how they are performing, and how their usage can be optimized in terms of distribution, routing, and more, for highest efficiency, fuel savings, and the smart allocation of limited resources.

Before 2009, companies with many assets to track were generally focused on the bottom line, and less, perhaps, on the efficiencies of their organizations and operations. It is safe to say that most of those companies would have a difficult time stating precisely where, and under what conditions, their assets were at any given moment, even though the Sarbanes-Oxley act put into legislation that publicly-traded companies must provide visibility to all of their assets at any given time.

Tracking large volumes of fixed and mobile assets is a considerable challenge, ignoring the costs associated with operating those assets; well that’s basically saying ‘I know I could spend less, but I just don’t have time for it right now’. At least that’s the way it was over a year ago. But now, times are different. Welcome to the ‘Post Throw-Away’ economy.

These days the big questions asked by companies include ‘Where are my assets? Are they where they should be? What is their condition? Does that asset even exist?’ The first two questions should be obvious; the latter two require a little more explaining. ‘Knowing the condition’ means more than is it working or not. It means is it operating sub-optimally, such as wasting fuel by idling unnecessarily, or is it due for maintenance and I need to start planning for when and where that will take place? Knowing this means that, as the owner, I’m being proactive and not reacting when, not if, something goes wrong. It is of course a general rule that when something goes wrong, it will do so at the worst possible time.

2009 was real wake-up call for many corporations, since the effects of the ‘great recession’ left no industry untouched. To that end, all eyes turned inwards, and many were in fact scrambling to do more with less. I would argue that it was the reverse; we started to re-learn how to be more efficient and effective with what we have. Now more than ever, greater attention is being paid to maximizing the utility of our assets. It is no longer acceptable to just replace or ignore them.

Telematics have come into their own, and are enabling managers to use assets more efficiently, but Telematics are not a ‘silver bullet’, and won’t solve the financial crisis, but for those who have embraced the technology, it has paid off handsomely. In some cases their use has even generated a significant profit.

As an example, when the price of diesel fuel went up to nearly $4 per gallon in the U.S., one trucking company realized that they could probably save fuel if they installed telematics products into their fleet of trucks to indicate when a truck’s engine had been idling for more than ten minutes. At that point, the units could be set up to turn off the truck’s engine, or to relay that information to a control center where the decision could be made to do that, and do it remotely. It was more than a fuel-saving issue; it was an environmental one, and even a social/PR one. It is common to read complaints in letters, and columns in local papers about truck drivers leaving their engines running during lengthy deliveries. If they are local government vehicles, taxpayers on the street realize that their money is being wasted, and it even becomes a political issue. This is how this sort of thing can blossom. In this case, the company that installed the units in their fleet saw complete ROI in two months, just on fuel savings alone!

Asset tracking helps managers take advantage of many different choices in managing their resources for highest efficiency. It answers the questions of “How do I become more efficient with what I have? And of what I have, how can I learn to do more with it? Do I move these assets, or purchase new ones? Transport by plane, ship, train, or truck?” Wasted money, shipping half-full containers or trucks or on a route twice as long as it needs to be becomes a thing of the past. Planning is far more organized, condition of assets can be monitored and the overall operation can be better controlled.

Now we ask, who will be the smart managers who connect the dots and realize the tremendous potential and cost savings by adapting telematics? Who will be left behind wondering where they went wrong? In any case, whoever figures it out first will reap the rewards and gain a significant advantage over their competition through the use of telematics, the singularly most important technology enabler for extracting asset value in the new ‘Post Throw-Away’ economy. It’s not a question of if, but when.

Military telematics: Afar, and at home

The way telematics systems collect and share information will continue to evolve and aid the transition toward more intelligent machine operation and care.
Sara Jensen
April 14, 2020

Integrated OEM telematic solutions allows for the ability to develop next gen solutions for the construction industry
JLG Industries Inc.
March 13, 2020
Follow Us