Fulfilling a need for hillside safety 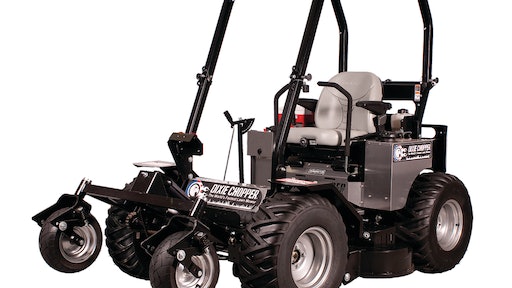 Anyone who has mowed a lawn knows even the slightest incline or hill can make the task more difficult and dangerous. To help make hillside mowing more manageable, Dixie Chopper has developed the XCALIBER 4X4, a four-wheel drive (4WD) zero-turn lawnmower.

The combination of 4WD and zero-turn enables the XCALIBER 4X4 to safely and accurately mow any slope less than 30 degrees.

The idea for the lawnmower came from one of Dixie Chopper’s end users, Michael Hecht, who was concerned about the safety of his wife who tends lawns for several historical estates in Maryland. After several incidents of rolling mowers, Hecht took it upon himself to begin designing a safer lawnmower that could better handle the hilly Maryland terrain.

In 2008, Hecht began building a prototype 4WD Dixie Chopper. By March 2009 he had developed a lawnmower that could safely stay upright on a hillside, and brought his design to Dixie Chopper. The company liked what it saw and began developing the XCALIBER 4X4, with Hecht receiving credit as inventor of the mower’s hinge mechanism on the patent.

Beau Battin, Marketing Assistant at Dixie Chopper, says the company chose 4WD because it “offers additional traction for [hillside] safety, productivity and functionality.” When driving downhill the 4WD helps to counteract the effects of gravity which causes weight to be shifted to the front of the mower, pulling it faster down a hill than the operator would like. Since all of the braking power is in the rear wheels of the mower, when gravity is pulling the mower, it can be more difficult to slow down or stop, says Battin.

Battin also notes that normally zero-turn mowers with caster wheels in the front will turn while going down a hill, again because of gravity, causing an operator “to constantly ‘push’ the front end up the hill by giving slightly more power on the downhill side.” Doing this creates “crabbing” or moving the mower at an angle across the hill.

For extra stability insurance, a dual wheel kit can be added to the XCALIBER 4X4 to help lower ground pressure and increase traction on soft terrain.

Battin says the caster wheels have the ability to be lowered with downward pressure, raising the front drive wheels off the ground just enough to give the mower the zero-turn capability that every customer wants. Without the caster wheel mechanism, the mower would tear up lawns while steering.

More than just a lawnmower

Another feature of the XCALIBER 4X4 is its ability to have attachments added to the front end of the mower. Attaching a snow blade, blower, brush or bucket enables users to utilize the machine year-round, giving customers more for their investment.

According to Battin, the lawnmower has uses in many applications. “We have had success with municipalities using the mower to maintain their reservoir dams, contractors who are maintaining areas that might have been too steep for other mowers, and farmers who are using it to maintain their irrigation ditches.”

New investments at the manufacturing site in Lindau enable the company to offer a variety of services.
Liebherr-Component Technologies AG
October 9, 2020

The award will fund development of an Additive Manufacturing process capable of manufacturing Cobalt-free hardmetals into complex, net or near-net shaped parts without tooling.
October 7, 2020

The new assembly line is designed to optimize the flow of materials and minimize process risks during the manufacture of engines.
DEUTZ Corporation
October 7, 2020

One of the bills AEM supports, H.R. 2900, would create a U.S. Chief Manufacturing Officer who will be responsible for coordinating manufacturing-related policies and activities across federal agencies.
Association of Equipment Manufacturers (AEM)
October 5, 2020

Installation of an aluminum brazing furnace will help optimize IEA's supply chain and its ability to design and produce products faster.
September 30, 2020

The International Federation of Robotics have released a new report indicating use of industrial robots continues to increase in the United States and United Kingdom.
OEM Off-Highway Editorial Staff
September 30, 2020

PMA’s September report shows that 40% of metal forming companies predict an improvement in economic activity during the next 3 months.
September 28, 2020

GKN has completely rebuilt its manufacturing facility which is now producing three times as many wheels as its old plant.
GKN Wheels & Structures
September 24, 2020

The Smart Factory @ Wichita will demonstrate how Industry 4.0 can make an impact to spur innovation and enable smart factory capabilities.
September 15, 2020