Swing booms saw much use by the Armed Forces in World War II, but were not designed for picking, carrying and placing long sections of pipe for civilian use. 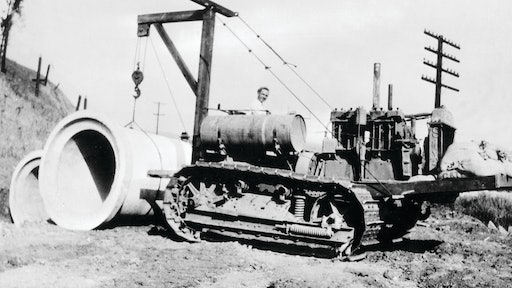 The problems involved in placing pipe with an end boom are illustrated by this rather crude rig, designed by R. G. LeTourneau for a Cat Sixty and used by his construction company on the grading contract for Southern Pacific Railroad's Carquinez Bridge approach in Benicia, CA, in 1929. Ballasted by sandbags, it provided ample capacity for a single section of pipe, but was unable to carry long strands along the trench.

Along with sidebooms (read the article "Sidebooms,"), other tractor-mounted cranes were developed starting in the 1920s to add the capability to lift and carry a load to a tractor’s mobility, be it crawlers on rough terrain, or the industrial wheel tractor over pavement and in industrial settings.

Swing booms that rotated nearly a full 360 degrees from a pivot atop the tractor were marketed for general utility work. Swing booms saw much use by the Armed Forces in World War II, and one such crane—the so-called “Anteater” built by Austin-Western as a munitions handler for the U. S. Navy—was the ancestor of today’s hydraulic cranes. Many military surplus swing booms were resold into the civilian market after the war; while they were handy machines for general lifting needs such as placing short sections of pipe, their designs rendered them unsuitable for picking, carrying and placing long strands of pipe.

End-mounted booms were also available. Unlike the side or swing boom, some end booms, such as the Hyster Hystaway, were fully convertible and could be used as shovels, backhoes, draglines or cranes. They were also available for larger tractors for which swing booms are not known to have been available. While those with excavator capabilities could help in a limited capacity with the trench work, they faced the same problem as the swing booms in pipeline placement.

Where the sideboom attachment for crawler tractors evolved into purpose-built pipelayers, no such evolution apparently took place with the end boom or swing boom. End booms and, for the most part, swing booms have been obsolete for years, but sidebooms and pipelayers continue to be manufactured.

The Historical Construction Equipment Association (HCEA) is a 501(c)3 non-profit organization dedicated to preserving the history of the construction, dredging and surface mining equipment industries. With over 4,000 members in 25 countries, activities include publication of a quarterly educational magazine, Equipment Echoes; operation of National Construction Equipment Museum and archives in Bowling Green, OH; and hosting an annual working exhibition of restored construction equipment. Individual memberships are $32.00 within the USA and Canada, and $40.00 US elsewhere.

HCEA seeks to develop relationships in the equipment manufacturing industry, and offers a college scholarship for engineering and construction management students. Information is available at www.hcea.net, calling 419-352-5616, or by emailing info@hcea.net.