Rubber-tired carriers of cable-operated excavators filled a niche into the 1960s. 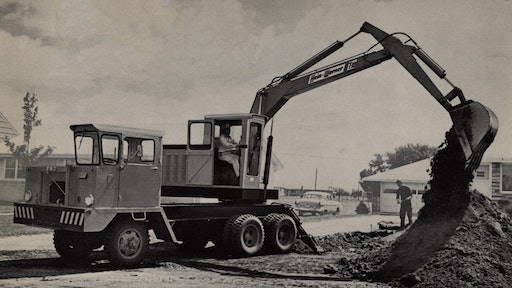 This image from a Hein-Werner advertisement illustrates one of the problems faced by a truck-mounted backhoe: When a backhoe has to be moved to continue the trench, the operator has to change cabs twice rather than simply propelling from the excavator cab.

Rubber-tired excavators date to the 1920s, shortly after the introduction of the first crane specifically designed for truck mounting in 1919. While never as common as crawler mountings, rubber-mounted cable-operated excavators filled a niche into the 1960s.

It was only logical that, as hydraulic excavators gained acceptance in the market, some should also be mounted on roadable, rubber-tired carriers for ease of movement from job to job. The means of accomplishing this varied widely from company to company and model to model.

Some excavators were mounted on commercial trucks, as were the original truck cranes, and others went on purpose-built crane carriers. In some cases a partial-swing backhoe was simply attached to the back of a truck or a tractor-like chassis. In at least the case of the Bucyrus-Erie H-3 and H-5 Hydrocranes, a backhoe attachment could be substituted for a telescopic crane boom, and the Drott Yumbo truck-mounted and Cruz-Air self-propelled backhoes could also be equipped as shovels early in their production.

Despite the advantages of speed and mobility, the idea of a truck-mounted hydraulic backhoe capable of traveling at highway speeds never really took hold. There were two apparent failing points to the concept.

One was sheer practicality. For all its utility in moving quickly from one job to another, a truck backhoe was inefficient for digging a trench of any length. Where a crawler-mounted or self-propelled backhoe could be quickly moved to a new digging position as the trench was advanced, the operator of a truck-mounted hoe had to leave the cab, climb into the truck cab for the move and go back to resume digging.

The other was the inability of a truck to carry big backhoes. In the late 1950s and 1960s, most hydraulic backhoes in America were small enough for truck mounting to work; but truck mounting was impractical for the larger backhoes that came into wide use starting in the 1970s.

Although truck-mounted backhoes faded away in the 1970s, self-propelled backhoes did achieve a degree of success. The Cruz-Air, built by Drott, Case and finally Badger, had a production run of approximately 40 years, and several other manufacturers continue to offer self-propelled hydraulic backhoes. Evidently, self-propelled cabless carriers are preferred to trucks for these machines for compactness and ease of operation; the wheelbase is shorter and the machine is propelled from the excavator cab, although there is a trade off in travel speed compared to a truck. In contrast, Gradalls and other telescopic boom excavators have always been much more popular on trucks than on self-propelled rubber carriers.