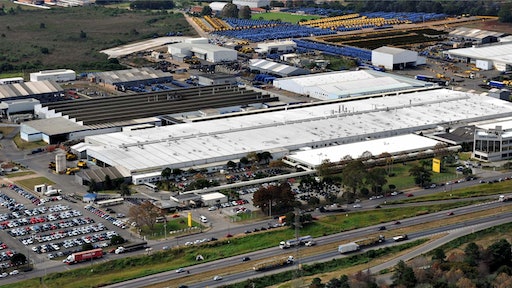 CNH Industrial has marked the 40th Anniversary of its first agricultural machinery plant in Curitiba, Brazil. Founded in 1975, the site’s earliest achievement was in 1976 when it produced the first combine harvester with domestically manufactured components, called Nacionalíssima.

Today, it is considered to be one of the world’s most versatile and modern industrial plants, exporting products throughout Latin America. Curitiba currently produces components, tractors and combine harvesters for the company’s global brands Case IH and New Holland Agriculture.

"It is a great pleasure to be an active witness of agricultural development in Brazil over the past 40 years, working closely with farmers and directly contributing to making our country one of the largest food producers in the world," said Vilmar Fistarol, Chief Operating Officer of CNH Industrial in Latin America on the occasion of the site’s anniversary.

Curitiba operates according to the World Class Manufacturing (WCM) system with a Bronze level classification. WCM is based on continuous improvement, designed to eliminate waste and loss from the production process. The widespread use of WCM principles at CNH Industrial plants allows the entire company, totaling some 69,000 employees across 190 countries, to share a common culture based on efficient processes and on a universally recognized language.

The technological advances that the site has undergone over the past four decades have seen it reduce polluting emissions and fuel consumption, while increasing the average power of the machines it produces. The developments made at Curitiba to improve the precision of combine harvesters are one example of how the site has been instrumental in the growth of food production in the region. In the 1970s, crop losses ranged between 10 and 12%. Today, combine harvesters manufactured in Curitiba record up to only a 0.5% crop loss, maximizing yields.

"In these 40 years, our plant has evolved remarkably, with the adoption of new industrial processes, the reduction of waste, and achieving excellence in its production practices. Because of this, we are equipped to manufacture and deliver machines to farmers that are fully compatible with the needs of their business," says Fistarol.

Another key to the continued success of the plant remains its investment in its people. The site currently employs 2,200 employees.

CNH Industrial includes the majority of its products in Brazil’s public financing system to facilitate the purchase of agricultural machinery. Starting from the early 2000’s Banco CNH Industrial, the company’s financial services division in Latin America, has continued to present Brazil’s Federal Government with suggestions for programs to modernize the country’s fleet of agricultural machinery. A number of these suggestions have been implemented and gone on to make a considerable contribution to the farming sector’s evolution.