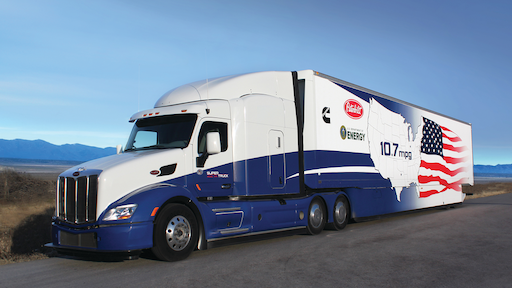 A participant in the Department of Energy (DOE) SuperTruck program with its partner Peterbilt, its concept vehicle achieved 10.7 mpg during road testing and averaged a 75% increase in fuel economy, a 43% reduction in GHG emissions and an 86% gain in freight efficiency in 24-hour testing against a 2009 baseline truck. 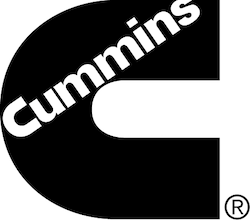 Developing a truck that could meet or exceed 10 mpg when fully loaded was considered unlikely, if not impossible, just a few years back, with most trucks averaging between 5.5 and 6.5 mpg. However, with advances in engines, aerodynamics and more, SuperTruck has proven that 10 mpg is attainable.
SuperTruck averaged a 75% increase in fuel economy, a 43% reduction in greenhouse gas (GHG) emissions and an 86% gain in freight efficiency in 24-hour, head-to-head testing against a 2009 baseline truck - all significant improvements.
The Cummins-Peterbilt SuperTruck was on display for President Barack Obama's announcement of firm deadlines for the next generation of national fuel-efficiency and GHG emissions standards for heavy-duty commercial vehicles.
The goal of the SuperTruck program, initiated by the U.S. Department of Energy (DOE), is to improve long-haul Class 8 vehicle freight efficiency. The program focuses on advanced and highly efficient engine systems and vehicle technologies that meet prevailing emissions and Class 8 tractor-trailer vehicle safety and regulatory requirements.
In addition to the benefits of reduced fuel consumption and petroleum usage, the improvements in engine system efficiency will deliver a significant reduction in GHG emissions.
Cummins has partnered with Peterbilt Motors Co. for the SuperTruck project. The project objectives have included development and demonstration of a highly efficient and clean diesel engine, an advanced waste heat recovery system, an aerodynamic tractor and trailer combination and a lithium ion battery-auxiliary power unit, to reduce engine idling.
The Cummins-Peterbilt SuperTruck uses the Peterbilt Model 579, with best-in-class aerodynamic efficiency. The engine, based on Cummins' industry-leading ISX15, converts exhaust heat into power delivered to the crankshaft, and has electronic control software that uses route information to optimize fuel use. The SuperTruck also includes chassis refinements, improvements in the aerodynamics and other significant advances in the engine. Lightweighting throughout the tractor-trailer also enables increased freight efficiency.
Eaton Corp., also part of the Cummins-Peterbilt SuperTruck project team, is developing a next-generation automated transmission that improves fuel efficiency in heavy-duty trucks. Eaton's contribution includes the design, development and prototyping of an advanced transmission that facilitates reduced engine-operating speeds. Cummins and Eaton jointly designed shift schedules and other features to yield further improved fuel efficiency.
This demonstration of the Cummins-Peterbilt SuperTruck has exceeded DOE goals for freight efficiency - a key trucking metric based on payload weight and fuel efficiency expressed in ton-miles per gallon. The SuperTruck achieved an 86% improvement in freight efficiency and a 75% fuel economy improvement over a 24-hour test cycle in December 2013. The program goal was a 68% freight-efficiency increase over a 2009 vintage baseline vehicle of the same weight traveling along the same route.
"We are honored that the Cummins-Peterbilt SuperTruck has been chosen to be on display for President Obama's announcement," says Wayne Eckerle, Cummins Vice President - Research and Technology. "The SuperTruck clearly demonstrates the technologies that can deliver significant fuel-efficiency improvements over the next decade and beyond as we continue to develop for cost and performance attributes that will make them strong commercial successes."
Landon Sproull, Peterbilt Chief Engineer, agrees. "The work we're doing on SuperTruck is very much in keeping with Peterbilt's global reputation for industry-leading design, innovative engineering and fuel-efficient solutions," he says. "I think it's been a terrific opportunity for us to look into the future and demonstrate what's possible."
"Eaton's collaboration with Cummins and Peterbilt on the SuperTruck program reflects our commitment to develop highly integrated and optimized powertrains to help reduce fuel consumption and emissions," says Thomas Stover, Chief Technology Officer - Eaton Vehicle Group. "The critical need to increase the fuel efficiency will require the role of the transmission to grow significantly within the sphere of powertrain optimization, and as a leader in power management solutions, Eaton is at the forefront of innovation in this important area."
The Class 8 Peterbilt Model 579, powered by a Cummins ISX15 engine, achieved 10.7 mpg during testing last month between Denton, TX, and Vernon, TX. The 312-mile route was the same one used two years ago, when the first version of the Cummins-Peterbilt SuperTruck averaged just under 10 mpg. The testing in both instances was conducted on a round-trip basis, to negate any wind advantage that might have been gained by traveling one way, and each tractor-trailer had a combined gross weight of 65,000 lbs. running at 64 mph. A longer, 500-mile route between Denton and Memphis, TX, was also used to demonstrate the vehicle's fuel-efficiency improvement over a 24-hour test cycle.
The increase in fuel economy for the Cummins-Peterbilt SuperTruck would save about $27,000 annually per truck based on today's diesel fuel prices for a long-haul truck traveling 120,000 miles (193,121 km) per year. It would also translate into a more than 43% reduction in annual GHG emissions per truck. The potential savings in fuel and GHGs are enormous, given that there are about 2 million registered tractor-trailers on U.S. roads today, according to the American Trucking Associations.
Cummins is a prime contractor leading one of four teams under the DOE's SuperTruck project, one of several initiatives that are part of the 21st Century Truck Partnership. The partnership is a public-private initiative to further stimulate innovation in the trucking industry through sponsoring by government agencies, companies, national laboratories and universities. Cummins, Peterbilt and their program partners will have invested $38.8 million in private funds over the four-year life of the SuperTruck program when it draws to a close later this year. The project received critical support in matching grants from the DOE's Vehicle Technologies Program.

Manufacturers to Spend $19.8 Billion on Data Management and Analytics by 2026

Strength of Industries: Manufacturers Get Back to Work and a New Normal

For the many heavy equipment and component manufacturers who had to temporarily shut down due to COVID-19, operations are starting to reopen and get back to some normalcy.
Sara Jensen
May 18, 2020

AEM and I Make America is calling on the equipment manufacturing industry to join together in calling on Congress and the Trump administration to better support U.S. manufacturing.
Association of Equipment Manufacturers (AEM)
May 11, 2020

Volvo CE's Nele Van Campfort describes how a circular economy approach could be applied to the construction equipment industry of the future.
Volvo Construction Equipment
May 4, 2020

New Eagle's Raptor Work-From-Home Kit includes all the necessary hardware and software to set up its Raptor Embedded Model-Based Development from an off-site location.
New Eagle LLC
May 4, 2020

Four of 10 equipment manufacturers surveyed by AEM expect the outlook for the next 30 days to get worse and said they plan to lower their financial outlook for the same period of time by more than 30%.
Association of Equipment Manufacturers (AEM)
April 29, 2020

A new working paper from Purdue University provides a roadmap to recovery for manufacturers managing through COVID-19.
April 27, 2020

The number of manufacturers offering their help to provide PPE and other medical supplies to those combatting COVID-19 continues to increase.
Sara Jensen
April 27, 2020

Almost one third of the companies polled in Grid Raster Inc.'s survey said they are realizing more than a 25% increase in productivity efficiency from the implementation of AR/VR technology.
April 23, 2020

IVECO is using Comau’s MATE exoskeleton to help reduce fatigue on the upper limbs of operators engaged in the heaviest activities inside the various production departments of the company.
April 17, 2020

GlobalData reports the current global health crisis has brought to light the lack of investment in advanced factory automation and could be an impetus for its growth once economies recover.
April 17, 2020

Use of robotics and automation technologies are helping manufacturers ramp up production of protective face masks.
April 16, 2020
Follow Us