At INTERMAT 2015, TII Group will exhibit several products from its three brands SCHEUERLE, NICOLAS and KAMAG. 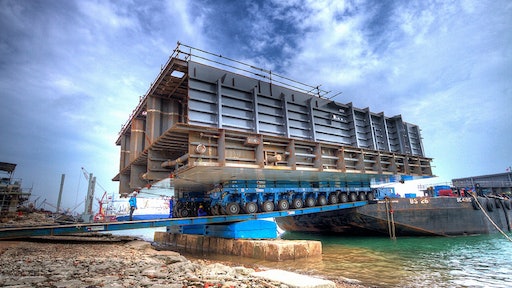 From April 20 to 25, 2015, the TII Group will be presenting at the INTERMAT in Paris (E6 C 029). The TII Group, which includes SCHEUERLE, NICOLAS and KAMAG, provides a wide range of pulled and driven vehicles for heavy transport operations both on- and off-road for logistics and material handling as well as the construction and haulage industries. On the TII Group stand, the main exhibits will be an MDEL-TP from NICOLAS, a SCHEUERLE-KAMAG K25 PB (PowerBooster) and a SCHEUERLE SPMT (Self Propelled Modular Transporter) complete with blade adapter.

"With the new low bed semi-trailer with Ackermann steering that we are taking to the Intermat, we provide a flexible, robust and efficient quality vehicles," says Bernd Schwengsbier, Chairman of the Management Board of TII Sales. "We are gearing ourselves for an extremely busy fair as we have already received a lot of appointment requests from existing as well as potential customers who want to visit our stand in Paris." This is not surprising because the TII Group has attracted a lot of attention almost continuously in the past few months through its innovations: the biggest slag pot transporter, the most powerful ship section transporter in the world, a side girder deck with an unmatched payload-dead weight ratio, numerous innovations in the SPMT sector and new developments in the area of PowerBooster technology repeatedly garnered worldwide interest in SCHEUERLE, NICOLAS and KAMAG. "With our lightweight series and vehicles such as the EuroCompact or Superflex, we have been the dominant force in the road transportation sector for many years now. Our product portfolio is rounded off by our low bed semi-trailers complete with Ackermann steering which have a payload of around 60 tonnes," says Schwengsbier.

Vehicles of the TII Group such as the SCHEUERLE-KAMAG K25 or NICOLAS MHD are successfully used around the world. In addition, customers of the TII Group profit from the German-French set up of the group of companies which is headquartered in Heilbronn: the special vehicle manufacturer NICOLAS, a member of the TII Group, allows its French customers to purchase the entire vehicle programme of the TII Group directly through NICOLAS and thus take advantage of advice and service activities without any language barriers. In part, some of the vehicles purchased will also be directly manufactured in Burgundy.

Background information on the exhibits:

The NICOLAS MDEL-TP is a low bed trailer designed for heavy-duty and special transports. The vehicle is characterized by its compact design and low dead weight. This not only increases the maneuverability of NICOLAS MDEL-TP but also simplifies approval procedures. The NICOLAS MDEL-TP is particularly suitable for transporting construction machinery, railway carriages, conveyor and crushing systems as well as industrial components. The MDEL-TP to be exhibited at the INTERMAT is equipped with an electronic TEBS control system - a standard feature at NICOLAS - with which the braking system of the trailer is controlled and monitored. This not only ensures immediate transmission of the braking signal from the tractor unit to the trailer but also guarantees increased safety and comfort: brake pressure, system status or error messages are shown on a centrally-located display panel. On request, this display can also be enhanced by the addition of the well-known iTap system and thus show the system status on an Apple or Android device. Even the photos of the rearview camera can be optionally transferred to a mobile phone or tablet.

At the INTERMAT, the TII Group is presenting, among other things, an 8-axle SCHEUERLE Self Propelled Modular Transporter (SPMT) complete with mounted rotor blade adapter. In 1983, SCHEUERLE developed this vehicle that would fundamentally revolutionize the heavy haulage industry. The SPMT (Self Propelled Modular Transporter), with its container-sized design was introduced into the heavy-load transporter sector and changed more than just the way how loads are transported. The production concepts for the modular construction of industrial installations, conveyor systems or infrastructure projects could be transformed through the future-oriented approach now available. Today, industrial production modules reach weights of up to 15,000 tonnes with the door left open for even more potential. They are handled through the use of SPMT product groups from the TII Group: the "SCHEUERLE SPMT Gen. 4" and "KAMAG K24." The TII Group is the global leader in the manufacture of self-propelled modular vehicles. 70% of all transports over 3,000 tonnes as well as 90% of all transports over 5,000 tonnes are carried out on SPMTs from the TII Group. Customers of the TII Group benefit from the unmatched global coverage with modular vehicles. Due to the fleets of vehicles available around the world, operators can rent additional axle lines (cross-hire rental) if required and hence are able to flexibly manage new projects even if more axle lines are needed than are actually available in the company's vehicle fleet. This allows processing more profitable projects and provides customers of the TII Group with a head start over the competition in terms of flexibility and planning certainty. SPMTs from the TII Group can be coupled together regardless of their age, and can be loaded onto container flat racks and thus easily transported. Today, the term SPMT - which was first introduced into the market by SCHEUERLE in 1983 - has developed from being purely a company product name in container dimensions (2.43 m) into a generic term, used also in the meantime for self-propelled modular platform trailer combinations with a width of three metres or more. With 14,000 "classic" SPMT axle lines (featuring container-suitable dimensions) and 35,000 driven axle lines sold in the market, the TII Group is the undisputed global market leader in the area of self-propelled transport solutions. Continuous technical developments and innovations, such as the SPMT Widening Solutions or the SPMT F with an increased top speed, ensure quality vehicles at the highest technical level.

Another exhibit of the TII Group at the INTERMAT is the SCHEUERLE-KAMAG K25 PowerBooster, a modular platform trailer with an additional drive unit. Its versatility is impressive as it basically provides a 5-in-1 solution:

1. The vehicle is equipped with drive axles and can be towed at 80 km/h or, if required, driven by a likewise shiftable PowerPackUnit (PPU). Before negotiating a critical incline, the driver activates the powerful PPU. As soon as the tractor no longer has sufficient power to manage the incline, the drive automatically cuts in thus providing sufficient thrust. Once the slope has been overcome, the additional drive unit switches off automatically and the speed can be increased again in accordance with the road conditions.

2. After the drive has been switched off, the drive unit can reach a speed of up to 80 km/h in the transport combination. The K25 PB is also characterized by its sturdy chassis construction, a +/- 300 mm axle compensation and a steering angle of 60 degrees.

3. For in-plant transports, the drive unit with the PPU - with or without the K25 platform trailer - can be uncoupled from the tractor and controlled by means of a mobile control system as a self-propelled transport combination. This operating panel controls the hydrostatic drive, lifting and lowering functions, hydraulic steering along with the braking system.

4. A further option for in-plant transport assignments is the mechanically coupled parallel combination. Due to this broad base, payloads with a high center of gravity can be safely transported.

5. The PowerBooster can be used as a traction unit at the front or pusher machine at the rear for extremely long combinations (with or without decks). With all these different possible combinations, the PowerBooster is the all-rounder in heavy-goods transportation.