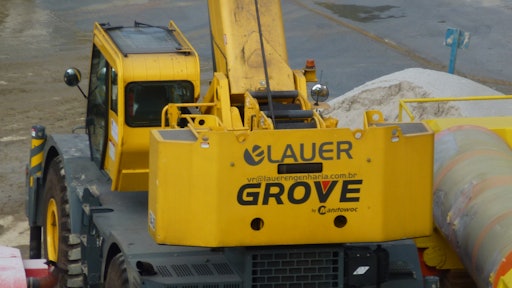 Brazil’s push to expand its infrastructure is gaining new momentum in 2015 as hundreds of large-scale projects—including dams, high-speed rails, roads, energy generation plants, mines and industrial farms—are planned or already in progress throughout the country.

Anticipating the development, Manitowoc built a modern 25,000 m2 (82,021 ft2) facility in 2012 in Passo Fundo, which lies in the southern state of Rio Grande do Sul. The factory is the first of its kind in Latin America, supplying Grove rough-terrain cranes and, more recently, Potain tower cranes.

The first ever Grove RT765E-2 crane assembled at the Passo Fundo factory has taken part in some of Brazil’s most-prominent infrastructure projects of the last three years. The crane has been an integral part of the country’s rise to one of the world’s industrial powerhouses.

According to Lauer, the Grove crane will remain at the public transit development site until mid-2015. The 16 km long (10 mile long) railway will have six stations and will transport 300,000 passengers a day starting next year. The line will greatly benefit daily commuters and international visitors for the 2016 Summer Olympics, hosted by Brazil.

The consortium in charge of the subway extension chose the rough-terrain crane due to its versatility, according to Fernando Vianna Lauer, owner of Lauer Machinery and Engineering.

“We’ve been able to show contractors how versatile a Grove RT765E-2 can be—the applications are endless,” he says.

As the crane prepares to wrap up work on the subway project, Lauer is already planning which project the RT765E-2 will take on next. The crane’s ability to perform well in a diverse range of job sites gives Lauer much flexibility.

“We at Lauer strongly believe that investing in Manitowoc cranes is the ideal choice,” Lauer says. “It certainly pays off in the long run, when you consider maintenance, services and most importantly, performance.”

Nearly three years since the opening of the Passo Fundo plant, Manitowoc has established an array of logistics partners in the region. The time spent refining processes and gaining experience has helped make the plant a vital part of South America’s lifting industry.

Located in the heart of the Mercosul (or Mercosur, the trade agreement bloc that includes Brazil, Argentina, Uruguay, Paraguay, and Venezuela), the Passo Fundo plant benefits from the state of Rio Grande do Sul’s reliable infrastructure. The area boasts a variety of assets that make it ideal for the lifting industry, including cargo transiting the deep-water ports on the Atlantic coast.

Having recently expanded its parts warehouse, Passo Fundo is quickly becoming known for its crane support services. Responsive after-sales services teams both at the factory and among four other locations in Brazil, is one of the most advantageous aspects of owning a Grove crane in the country, Lauer attests.

“We’ve been impressed by the prompt responses we get from Manitowoc Crane Care’s service team when we contact them,” he says. “We’ve reach out to Manitowoc Crane Care twice: once regarding additional information on the RT765E-2 and once about requesting technical support. In both instances we received extremely fast and thorough service.”

Along with reliable after-sales support, the energy-efficient engines and top-notch technology bring a great return on investment, Lauer says.

“Personally, I’m very happy that Manitowoc has a factory that continues to expand and improve the lifting standards in our country,” he says. “As my father, who had a career in aviation, used to say: ‘Price is relative, quality is mandatory’.”