A Florida-based recycling company chooses an SDLG wheel loader to meet its durability and reliability needs. 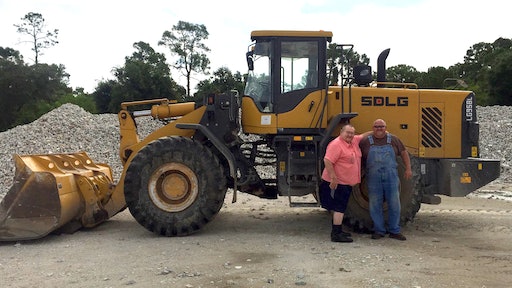 When one of Whitehead and Johns’ wheel loaders blew a transmission that would take several months to fix, the company found itself in a pinch. The North Fort Myers, FL-based company needed a wheel loader that would hold up to the rigors of its recycling duties. It sought help from Flagler Construction Equipment, its local SDLG dealer, and in the end, found an ideal fit with the SDLG LG958L wheel loader.

Whitehead and Johns became a recycling company in 2004, but James Whitehead has been working in the field since 1966. Over the years, he’s learned about construction equipment. He’s owned several wheel loaders over the years and says his SDLG wheel loader performs as well as any machine he’s ever owned.

“We’ve been using the LG958L for six months now, and it’s been performing great for us,” he says. “We are using it to recycle dirt, brick, concrete asphalt, construction debris, field top soil and other salvaged materials. The ZF transmission and SDLG axles are especially durable, and the Deutz engine works as well as any wheel loader on the market.”

Whitehead and Johns has three locations and each uses one wheel loader for material handling. The company is using its SDLG wheel loader five days a week, averaging about 30 hours of duty each week. Its LG958L loads materials into one of its facility’s crushers and screeners. The work is tough on wheel loaders but the LG958L has handled it with ease. Whitehead said that the company didn’t need the features of a premium machine for its recycling tasks.

The LG958L features a 4.0 yd³ capacity bucket, Tier 3 Deutz engine with 224 hp and 777 lbs.-ft. of torque. It has an operating weight of 38,250 lbs., a hydraulic quick coupler and third function hydraulics come standard. Wet disc brakes are available for the loader, but Whitehead and Johns chose dry disc brakes for their easy cleaning and maintenance.

Whitehead and Johns purchased its wheel loader from the Fort Myers branch of Tampa, FL-based Flagler Construction Equipment. The company factored the dealership’s ability to respond quickly with parts and service into its decision, proving SDLG’s strategy to partner with seasoned, skilled dealerships.

“We were already down one wheel loader that was going to take six months to fix, so we really wanted to purchase an SDLG loader from a dealer that could have us up and running, with new parts or service, fairly quickly,” Whitehead says.

Like all SDLG dealerships, Flagler CE stocks a wide range of construction equipment and has a team of well-trained sales and service personnel to back its SDLG products. It also offers SDLG’s 21st Century Product Support, which uses a central parts location to ship parts to customers and dealers, often within 24 hours. All of the brand’s wheel loaders are backed by a 12-month, 1,500-hour manufacturer’s warranty.