McNeilus is celebrating 25 years in the refuse industry in 2016, and aims to continue building on the reputation its achieved thus far as it continues into the future. 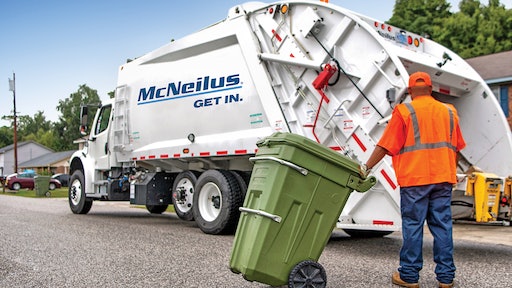 McNeilus Truck & Manufacturing Inc., an Oshkosh Corporation company, is proud to announce 25 years of service to the refuse industry. In 1991, McNeilus entered the market with the PacStar Rear Loader. This year, McNeilus celebrates its silver anniversary and a host of accomplishments over those 25 years, including building a superior factory-direct support and service network and growing a product line of top-performing refuse truck bodies.

McNeilus has a history of exceptional customer service, and over the years the company has worked hard to build what now can be called the industry’s best direct support and service network. Today, McNeilus has 28 branch locations across North America, with 20 of those locations opening in just the past 15 years. This factory-direct model includes parts & service locations, mobile on-site assistance, and teams of product, service and training experts with hundreds of years of combined industry experience.

Along with building strong relationships with its customers, McNeilus aims for market-leading innovation by developing products and technology that exceed customer expectations in uptime and performance. Since 1991, an impressive array of front loading and automated side loading products have been added to the portfolio, providing premier lift, reach and carrying capacity. What once was the PacStar rear loader has evolved into the McNeilus Standard Rear Loader. Several other innovative models have also been added to the rear loader product lineup over the years. In fact, McNeilus has sold nearly 24,000 rear loaders since production of refuse vehicles began.

“We are proud to have been able to serve the refuse industry for 25 years, and we continue to build on our track record of meeting and exceeding our customers’ expectations,” says Brad Nelson, President of McNeilus Truck & Manufacturing and the Oshkosh Commercial Segment. “Over the years, we have shown there are more and more reasons people continue to choose McNeilus.”

One of McNeilus’ first refuse customers, and owner of one in the first batch of PacStar rear loaders ever produced, can say he’s been one of those satisfied customers from the beginning. Gary Husseman was the owner and operator of Rockville Trash Removal in Rockville, IN, until he retired recently. He spent 26 years in the refuse business and remains loyal to the McNeilus brand.

Over the years, Husseman moved from the PacStar to a rear loader with more compaction – the McNeilus Heavy Duty Rear Loader. He stayed with McNeilus because he says the McNeilus packers just performed better than anything else. Along with his other McNeilus trucks, the old 1991 PacStar was still in use, too, when he retired.

“I used [the PacStar] as my [secondary] truck. Everything was still running good on it,” he says. “I never had any major problems with my McNeilus trucks.”

With his experience working in the industry, he was often asked about which trucks he used. Husseman says he recommended McNeilus trucks to people all the time, not only because of the quality he saw in the products but because of the experiences he had with its people. Even now that he’s retired, “I still recommend McNeilus,” he says. “I’ve liked everyone I ever dealt with.”

“That kind of brand loyalty is a testament to the high quality products and services that we provide,” Nelson says. “And, we strive every day to earn strong relationships with our customers that keep them choosing McNeilus for years to come.”

McNeilus’ 25 years of refuse products and its history of superior innovation and and service will be major themes for the company during the 2016 Waste Expo Convention & Expo later this year at the Las Vegas Convention Center.