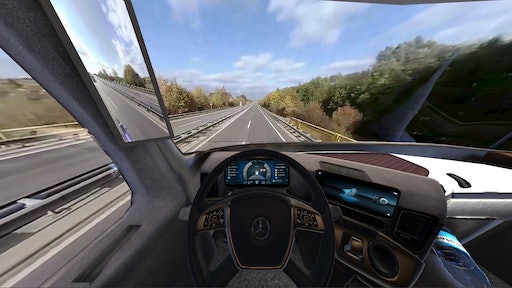 The digital image of the truck cockpit and driving situations.

For the first time, development engineers from Daimler Trucks will be on the road with a mobile vehicle simulator for user tests in the coming weeks. Truck drivers can test prototypes of future digital operating menus as well as new app offers in the simulator. The prototypes are based on the existing systems of the new Mercedes-Benz Actros. Feedback from the testers goes directly into further development work at Daimler Trucks. The simulator is fitted in the rear of a Mercedes-Benz V-Class. The developers of Daimler Trucks will stop at motorway rest areas along major traffic routes in the Stuttgart area in July.

The mobile simulator enables the Daimler experts to meet the drivers in their usual working environment. On the one hand, this ensures more reliable test results, and on the other hand, the developers can address more truck drivers for the tests in a shorter time. The simulation uses state-of-the-art virtual reality technology with 3D models and measurement sensors.

Dr. Christian Ballarin, Head of Advanced Engineering Daimler Trucks for Active Safety, Autonomous Driving and Connectivity: “Feedback from truck drivers after initial test runs is very positive. The drivers are pleased that we actively involve them in the further development of the operating systems that they use every day in their daily work - and thus also with the appreciation. A big advantage of our mobile test lab is that it brings us to the drivers, not the other way round. By having drivers test in their professional environment, their feedback is even more authentic. This represents a huge benefit for our development work.”

Exploration of the user-friendliness of the menu navigation

While testing, the truck drivers wear virtual reality 3D glasses in which they see the digital image of the truck cockpit and driving situations. In addition, the drivers physically hold the related truck multifunction steering wheel in their hands. Steering wheel and 3D simulation are linked. In this first step of the new test series, the Daimler engineers are mainly investigating the user-friendliness of the menu navigation in future cockpit screens as well as the acceptance of the app portfolio by truck drivers.

Two experts from Daimler Trucks are present during the tests in the mobile simulator and observe and record the reactions and statements of the truck drivers. In addition, sensors record the movements of the drivers, which allows further conclusions about the user-friendliness of the systems. A test takes about 20 minutes. The selection of the participants takes place by pure chance on site at the rest areas by the Daimler developers. The tests are completely anonymous.

Multimedia Cockpit: the heart of the new Actros

The new Actros celebrated its world premiere in September last year with many new product highlights, which support the driver in terms of safety and comfort. Since end of May this year, the new Actros is produced in series. A highlight is the Multimedia Cockpit, which offers the driver a unique operation and display comfort. Two interactive screens serve as a central information source. The cockpit enables the integration of smartphones as well as apps, which support the driver in the daily business. The primary color display and the secondary touch display can be controlled via the new multifunction steering wheel with its touch control pads, also known as finger navigation pads. By swiping and pressing the touch control buttons, the driver is in a position to operate both screens safely, even while driving.

The Senate has passed a $1 trillion bipartisan infrastructure bill, which now moves to the House.
Sara Jensen
August 10, 2021

Grid Raster says the remote work and training capabilities offered by augmented reality have increased its relevance in many industries.
Sara Jensen
August 10, 2021

The Aging Workforce: Four Ways Manufacturers Can Prepare Themselves

AEM highlights key steps manufacturers can take to prepare themselves for a changing workforce.
Association of Equipment Manufacturers (AEM)
July 29, 2021

The company's DURON heavy-duty engine oils, HYDREX hydraulic fluids and PRODURO transmission drivetrain oils are among those which will be exhibited at the event.
Petro-Canada Lubricants Inc.
July 6, 2021

The MXFS is a fiber Bragg grating measurement device, which makes it easy to install and electromagnetically safe.
HBM
July 3, 2021

Improving technology and wider spread adoption is leading to increased use of augmented and virtual reality.
Sara Jensen
June 28, 2021
Follow Us