Changes to the final production-ready design include replacement of the diagonal interface between the cab and the cargo box with a vertical line to improve vehicle construction efficiency. 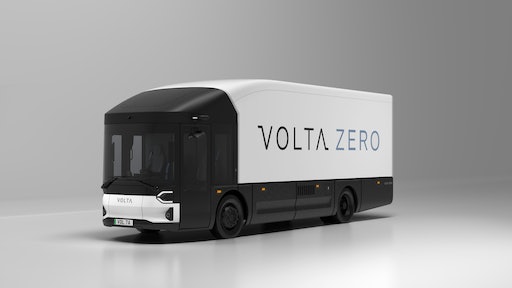 The unveiling of the Volta Zero’s final design, created by partner Astheimer Design in Warwick, UK, bears a close visual relationship to the original demonstrator vehicle, with its modern and innovative appearance and packaging. The final design also confirms that the revolutionary cab and premium working environment for drivers, with its low, central seating position to improve visibility and safety, will been maintained through to production. These same design principles will also be maintained into the forthcoming 7.5, 12 and 18 T variants – the latter now being repositioned from its previous 19 T gross weight.

Whilst bearing a close relationship to the original demonstrator vehicle, all body panels have been redesigned and updated for the final design. The most notable, but still minor, visual changes include the removal of the horizontal frontal light bar, and the replacement of the diagonal interface between the cab and the cargo box with a vertical line, to improve vehicle construction efficiency. Internally, only the color and material palette have changed, with the blond leather of the demonstrator being replaced with a more practical charcoal color, and the teak wooden flooring superseded by a more hard-wearing rubber matting.

Production of the first 25 Design Verification prototype vehicles is due to start shortly. These prototypes will embark on a comprehensive and rigorous testing regime, starting in early 2022. This will initially be undertaken by Volta Trucks engineers, and followed by customers, to ensure that the first production-specification vehicles, due to start manufacturing by the end of next year, deliver the highest possible quality levels.

Ian Collins, Chief Product Officer of Volta Trucks, said, “When the Volta Zero was revealed in September 2020, there were some who thought that its revolutionary, world-first design and packaging was just for show, and could never be built for production. We knew it wouldn’t be easy, but our constant motivation was the opportunity that a completely reimagined truck had to improve both the safety of drivers, and those vulnerable road users around large trucks operating in city centers. Working in close collaboration with Astheimer’s design team and our engineers, we have delivered a modern, progressive, and elegant design – exactly as an electric vehicle conceived from the ground up should be. The production ready Volta Zero delivers a paradigm shift in commercial vehicle safety and sustainability, and I look forward to seeing the vehicles on the road early next year as our rigorous testing program starts.”