By 2025, the company plans to have four full-electric commercial vehicles available in various weight classes to meet the needs of the logistics industry. 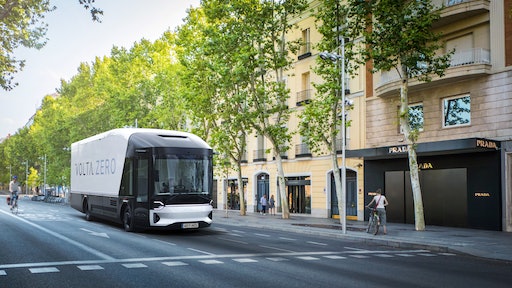 Volta Trucks has announced its Road-to-Zero Emissions strategy as it delivers on its vision of decarbonizing the logistics industry. The announcement comes at a time of increasing societal focus on climate change and air quality improvements, with many cities implementing low- or zero-emissions zones.

Building upon the success of the Volta Zero—the first purpose-built full-electric 16-tonne commercial vehicle designed for inner-city last mile deliveries—Volta Trucks plans to expand its product portfolio with three additional variants within the medium- to lower end of the heavy-duty class. With Volta Zero models available in the 7.5-tonne, 12-tonne, 16-tonne and 19-tonne weight categories, the company will offer a comprehensive range of full-electric commercial vehicles that have been reimagined and redesigned thanks to their innovative, compact electric powertrains by logistics people for the logistics industry.

The 16-tonne Volta Zero will be the first vehicle delivered, with Pilot Fleet trucks built by the end of 2021, and series production starting around 12 months afterwards. This vehicle is currently in the engineering development phase, with early prototype testing due to start shortly.

Production of the 16-tonne vehicle will be closely followed by the largest 19-tonne and mid-size 12-tonne variants in 2023. A Pilot Fleet of the smaller 7.5-tonne vehicles is expected to be launched for customer trials in the same year, with production commencing in late 2024. These later vehicles are currently in the early design development phase.

All trucks will adopt the low-seat central driving position with a glasshouse-style cab currently utilized in the Volta Zero. This offers 220-degrees of visibility to maximize visual communication between the driver and vulnerable road users around the vehicle. Also, like the 16-tonne vehicle, all variants will be designed with optimized payloads, thus offering fleet managers the opportunity of using a reduced number of larger Volta Zero vehicles, and removing several smaller vans from their operations, thereby also having a positive effect on inner-city traffic congestion.

Watch our video interview with Volta Trucks to learn more about the truck cab design.

The Volta Zero was launched in September 2020 and since its introduction, has been enthusiastically welcomed by fleet managers and city legislators alike, with market demand extending way beyond the initial London and Paris launch markets. As an example, at the end of 2020, Volta Trucks announced what was believed to be Europe’s single largest purchase of full-electric large commercial vehicles with the sale of 1,000 Volta Zeros to Petit Forestier, Europe’s largest refrigerated commercial rental fleet. The orderbook had swelled to $260M by January 2021 and continues growing on the back of increasing customer interest.

Given the strength of market demand for the 16-tonne Volta Zero, Volta Trucks will accelerate its market entry with a Europe-first strategy, followed by U.S. and Asian cities. The Volta Zero was initially launched in the UK and France and is currently in Spain for a tailored roadshow with customers. Afterwards, it will be presented in Germany and North America over the summer, with other European markets including Netherlands, Italy, and Belgium to be confirmed by year end. Volta Trucks expects to introduce the Volta Zero in all its four weight variants across all its core markets. Given the significant market demand for full-electric commercial vehicles, driven by customers' needs and regulation, Volta Trucks targets to sell more than 27,000 units per year by the end of 2025, with volumes increasing further in the following years.

Demand has also been accelerated by Volta Trucks’ unique Truck as a Service (TaaS) proposition that aims to revolutionize the financing and servicing of commercial vehicle fleets. TaaS will offer fleet managers a frictionless way to electrify their fleets, with a single, affordable, monthly fee providing access to a full-electric Volta Zero, and all of its servicing, maintenance, insurance and training requirements. It will even provide a replacement Volta Zero when needed, maximizing the uptime and operational efficiency of the vehicle.

Volta Zero production to be close to its core markets

Given its sustainability ambitions, Volta Trucks will adopt a network manufacturing strategy with a number of assembly facilities distributed across its key geographies, minimizing unnecessary transportation and cost. The company recently announced it has ‘expressed an interest’ in manufacturing vehicles at the Decarbonization Hub project in the former Nissan manufacturing facilities in Barcelona. Any vehicles manufactured in Spain could potentially serve southern European markets but would not be the first vehicles built. The company is considering a number of additional manufacturing locations across Europe, North America and Asia, to have the capacity to meet the significant volume ramp up envisaged within the plan.

Announcing the company’s ambitious Road-to-Zero Emissions strategy, Chief Executive Officer of Volta Trucks, Essa Al-Saleh, said, "We have seen huge success since launching the 16-tonne Volta Zero in September 2020. We have significant tail winds with zero emission large commercial vehicles, thanks to forthcoming legislation changes that are driving demand, as well as many customers with uncompromising sustainability agendas wanting to purchase the most environmentally focused vehicles for their fleets. This has created a very strong order book that encourages us to rapidly accelerate our plans.

"When we launched the Volta Zero, we’d expected to be selling 5,000 vehicles a year with a single model by 2025. Given our pace of development, driven by customer demand, we clearly see the opportunity to expand the Volta Zero into a portfolio of vehicles to offer customers a wider selection of full-electric vehicle sizes, and to accelerate the change to zero emissions. This leads us to far more ambitious sales expectations, with more than five times the number of vehicles now expected to be built compared to our original proposal. That’ll see over 27,000 vehicles sold per year by 2025, and further volume growth afterwards. To achieve these ambitious goals and timelines, we will work in a very nimble and agile way to ensure our speed to market. We will also need a network of world-class manufacturing facilities. I’m pleased that recently, we expressed an interest to build Volta Zeros in Barcelona and are also investigating several other facilities in Europe, Asia and North America to ensure we can keep up with demand."

Founder and Executive Chairman of Volta Trucks, Carl-Magnus Norden, continued, "When we created the company, we originally set out to decarbonize logistics operations, and to make city centers safer and more sustainable places to live and work in. But we originally believed that we couldn’t achieve this objective by ourselves, and we strongly encouraged other manufacturers on their journeys towards zero emissions. Over the past months though, we’ve seen unprecedented demand in the marketplace, confirming that our ambition resonates well with our customers, but we've also seen very few other start-ups or OEMs announcing new fully electric commercial vehicles in the medium- and lower heavy-duty sectors. On this basis, we will have to deliver more of the decarbonization of the logistics industry ourselves, and the launch of four separate fully electric commercial vehicles targeting more than 27,000 truck sales per year by 2025, just three years after starting production, is a very strong statement of intent to deliver on our original vision."

This technology can be used with any internal combustion engine and any fuel, including hydrogen.
SuperTurbo Technologies
May 12, 2022
Follow Us