The new MapleMBSE release enables all stakeholders to engage with the systems engineering process. 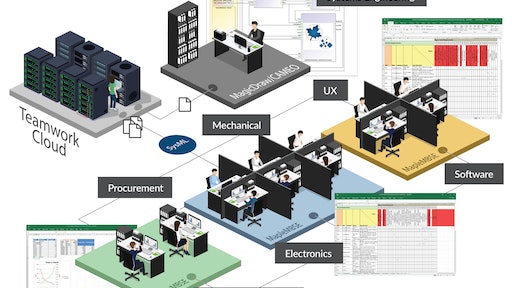 Maplesoft announces a new release of MapleMBSE, the software that enables companies to employ a Model-Based Systems Engineering (MBSE) approach to their design projects without requiring every engineer on the project to be an expert in complex MBSE tools. The latest release, MapleMBSE 2019.0, further improves the workflow by making it even easier to create and modify many of the structures used to define and analyze the design.

Using an Excel-based interface, MapleMBSE provides a streamlined interface for each task in your MBSE project, such as defining requirements, impact analysis, trade-off studies, and failure mode effects analysis. These streamlined interfaces make these tasks significantly easier to perform, and reduce the time and errors that typically come with using a standard MBSE tool. The new release includes enhanced support for the Systems Modeling Language (SysML) used by many MBSE tools, including MapleMBSE. Increased support is available for a variety of constructs that are used to define requirements, architecture, behavior, and relationships, including activity diagrams, state machines, and parametric diagrams. By making it easier to create and modify these underlying SysML constructs, the new release further reduces the time and effort required to define the requirements and the relationships between them, analyze the impact of changes, and improve the design.

“Model-based systems engineering lets organizations define, maintain, and communicate their project goals throughout every stage of their project, and MapleMBSE makes it significantly easier to involve all the stakeholders in this process,” says Paul Goossens, Vice President of Engineering Solutions at Maplesoft. “The usability of MapleMBSE makes productive collaboration on system design projects an achievable goal, and the latest release improves the user experience even further.”

Other improvements in this release enhance the integration of MapleMBSE with model management systems, including faster model access through Teamwork Cloud. By connecting MapleMBSE to Teamwork Cloud, customers can seamlessly access models created in a number of different tools, including MagicDraw, and Cameo Systems Modeler. MapleMBSE can also be integrated directly with other SysML-based tools, such as IBM Rational Rhapsody.