I can see through your skirt.

A solid-steel piston cuts a hole in the piston skirt, reducing friction and increasing fuel economy. 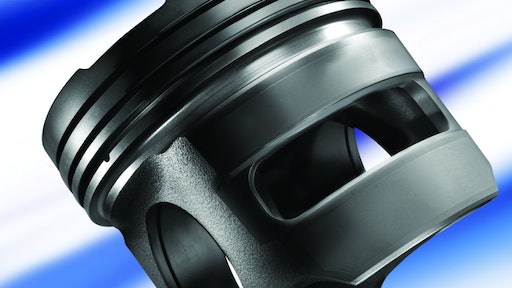 As we all know, diesel engines have had to go through several challenging emissions-reducing engineering changes. While engines are being downsized, power demands are staying the same, if not increasing. As these engine changes have occurred, fuel economy has suffered. “The only way engine manufacturers have been able to reclaim fuel economy has been increasing cylinder pressure creating a much more aggressive physical load force on the piston crown,” says Keri Westbrooke, director of engineering and technology for Federal-Mogul Corp.’s powertrain energy group.

“The traditional aluminum piston has been around for hundreds of years but could not cope with the growing physical loads, so in the 1980s the articulated piston – a steel crown with an aluminum body – was created,” says Westbrooke. Lasting only around 10 years, the articulated piston was replaced by Federal-Mogul with its Monosteel piston in 2003 to contend with the continuing growing pressure.

Made from solid steel, the two-piece welded component evolved into the recently released Monosteel Magnum piston. “Up until now, the objective was part survival against the high mechanical loads,” says Westbrooke. The steel material used increased the part’s survivability, but also increased its weight, reducing fuel economy.

The Federal-Mogul piston architecture has evolved over time to reduce the weight. Most recently, the piston had a window cut into the piston skirt to reduce friction in the engine system. The tight fit of pistons in the engine, in addition to the piston rings is a major source of engine friction and heat. “One of the main areas of friction in a piston is the skirt rubbing on the bore. It creates a lot of drag. What we’ve done with the Magnum skirt is take a portion of it away while maintaining the structural integrity and performance of the piston,” says Westbrooke.

By reducing the contact points of the piston, the friction is reduced by up to 17%. The piston contributes to friction through drag, but also through overall mass of the piston. A lighter piston automatically transfers lower friction in the engine, so simply by removing part of the skirt, the reciprocating mass was reduced, as well.

Bearing bands are located at both the top and bottom of the skirt, a double-band piston skirt design, helps the Federal-Mogul Magnum piston maintain stability and guidance.

Overall piston wear is relatively negligible, as the steel construction makes the part last longer than the vehicle itself.

Thousands of hours of both finite-element analysis (FEA) and engine testing was done at Federal-Mogul’s many test facilities in both the U.S. and Europe to determine component lifetime, strength, fuse points and hotspots.

The hottest part of the piston is obviously going to be the crown where fuel spray, atomization and combustion takes place on the critical pressure point. “Not only has the mechanical load, firing pressures, increased over the years, but also the temperatures in the engines have been going up, as well,” confirms Westbrooke.

A large gallery or channel for cooling the piston with oil reduces the part temperature while increasing the structural strength of the piston, improving its fatigue safety factor (SF) to 5 – demonstrating the design is safe and unlikely to break, proved through FEA testing – and the overall stability of the ring belt.

“We supply the Monosteel piston to not only the on-highway truck market, but also for off-highway agricultural and construction equipment, and the fuel economy opportunities are equally realized whether the machine is driving down the highway or going off-road,” concludes Westbrooke. “The off-road equipment markets are also now looking toward fuel economy as they climb toward Tier 4 final emissions standards.”

Materials scientists at Federal-Mogul Corp. have developed an innovative material that eliminates a costly and energy-intensive curing process used throughout the industry. The elastomeric compound, called K16, improves Federal-Mogul's leading technology in UNIPISTON bonded hydraulic clutch pistons and enables the company to reduce the environmental footprint of its manufacturing operations with significant reductions in CO2 emissions and natural gas consumption.

The production of bonded piston seals has historically required that the parts are baked, or cured, in an oven for up to 12 hours at approximately 175 degrees C. By eliminating the oven post cure process, Federal-Mogul calculates that the annual natural gas consumption at its Frankfort, IN, plant alone will decrease by 40 billion BTUs and prevent nearly 2,000 tons of CO2 emissions from entering the atmosphere annually.

As vehicle manufacturers continue to seek ways to reduce CO2 emissions, the carbon footprint of the manufacturing process is becoming as important as the point-of-use emissions.

The finished K16 seal meets or exceeds the performance of previous seals both in terms of wear resistance and life expectancy and is based on proven long-chain elastomers.

Elastomers are normally formed by cross-linking millions of polymer molecules through vulcanization, which is traditionally carried out in two steps. In the first step, known as press cure, the elastomeric compound is forced into a mold that defines the desired shape. In this step, vulcanization is initiated by subjecting the compound to heat and pressure. Until now, the second step of vulcanization occurred during oven post cure, during which the compound is kept at a constant, elevated temperature for an extended period of time.

The successful introduction of K16 on the company's UNIPISTON product range is in production for several major OEMs. Plans are underway to integrate this innovation at Federal-Mogul facilities around the world.

In the first application of K16 technology at Federal-Mogul's Frankfort, Ind., manufacturing facility, parts can now be transferred directly from molding to shipping, bypassing the old oven post cure process and reducing part processing time. Implementation of the company's K16 technology has generated additional benefits at the Frankfort plant, including reductions in part travel distance and work-in-process inventory.

The K16 material was developed in Ann Arbor, MI, at one of Federal-Mogul's 18 global technical centers.