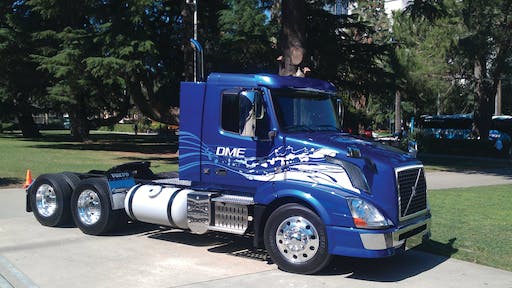 DME-fueled trucks, now under development by Volvo, will offer an ultra-low emission alternative to diesel as DME produces no soot or PM due to its lack of a carbon-carbon bond.

On June 6, Volvo Trucks North America announced it will begin commercial production of Class 8 trucks fueled by dimethyl ether (DME) in 2015. Goran Nyberg, President of Volvo Trucks North American Sales and Marketing, said during the announcement that the development of DME-fueled trucks will enable Volvo to offer its customers an ultra-low emission diesel-fuel alternative which is anticipated to be available at a cost-competitive price to diesel.

Read the full press release to learn more about Volvo’s commercialization of DME-fueled trucks, and its partnership with Oberon Fuels and Safeway Inc. to test heavy-duty trucks running on the fuel.

DME is a clean burning fuel that produces no soot and no particulate matter (PM) because it has no carbon-carbon bond like other fuel types. It can be made from a wide variety of organic materials containing methane including natural gas, food wastes, grass clippings, animal waste and landfill gas. According to Rebecca Boudreaux, Ph.D., President of Oberon Fuels (Oberon)—which is partnering with Volvo for the development of the DME-fueled trucks—any combination of methane-containing feedstocks can be used to make DME. For example, the fuel could be composed solely from natural gas or a combination of landfill gas, animal waste and natural gas. The feedstocks used to make the fuel are often dependent on what is readily available, and most cost effective, in the area where the fuel is being produced. Boudreaux said the flexibility of being able to use multiple feedstocks helps keep down the price of DME.

Development of the DME-fueled trucks is the third stage in Volvo’s Blue Power strategy the company’s initiative to design engines and vehicles which operate on alternative fuels such as compressed natural gas (CNG) and DME. As part of this strategy, Volvo has spent the last several years testing various alternative fuel options to replace diesel. Nyberg noted that seven different types of fuels were tested:

Of the criteria the fuels had to meet—climate impact, energy efficiency, land use efficiency, fuel potential, vehicle adoption, fuel cost and fuel infrastructure—Nyberg said DME outperformed each of the other alternative fuels. "Based on the response of our fuel comparison and extensive real-world testing of DME-powered Volvo trucks, it was clear this technology will survive other alternative fuels with diesel-like qualities,” he said.

Along with its minimal emissions production and ability to be made from various types of feedstocks, DME offers a wide range of benefits. When made from feedstocks such as landfill gas, grass clippings or animal waste, DME can help put to use materials that would otherwise have gone to waste. Research has also shown that DME made from biomass or biogas can reduce CO2 emissions by 95% or more. As CO2 is said to be the target of the next wave of emissions regulations to reduce greenhouse gases (GHG), already having the capabilities in place to minimize CO2 could be helpful to OEMs once the regulations take effect. DME is biodegradable as well, ensuring there will be no contamination of soil or water should there be a fuel spill.

To further illustrate its non-toxic nature to humans and the environment, Boudreaux pointed out that DME is already common in many products throughout the U.S. including hairspray and inhalers.

Though use of DME as a fuel is a relatively new concept in the U.S., countries such as China, Brazil and India have been producing DME fuel on a large scale for a number of years now.

Volvo will be using its D13 diesel engine as its base engine technology for the DME-fueled trucks. According to Ed Saxman, Marketing Product Manager for Alternative Fuels at Volvo Trucks, one of the biggest changes to the D13 engine will be the introduction of new injection technology because DME will require two times the fuel flow of diesel. However, because DME is injected as a liquid, Volvo will be able to rely on its current fuel injection technology as a starting point for the new injectors.

As a compression ignition fuel, Saxman noted DME will enable the engine to operate at a higher compression ratio as well as achieve 10 to 15% higher efficiency. There will also be less heat rejection and lower exhaust temperatures.

Aftertreatment systems for the DME engine will be minimal due to the low-emissions nature of the fuel. There will be no diesel particulate filter (DPF), exhaust gas recirculation (EGR) or variable geometry turbocharger (VGT). Saxman noted selective catalytic reduction (SCR) may be included on the initial engine introduced to the market, but Volvo hopes to progress the technology enough to eliminate the need for SCR, as well.

Unlike CNG and liquefied natural gas (LNG), DME can be stored at lower pressures—75 psi—as well as stored indefinitely at ambient temperatures, making it a safer fuel to handle. DME can also be stored in a lighter weight tank, helping to minimize additional weight that could be added to the vehicle. CNG and LNG, on the other hand, require tanks of a heavier duty material, typically carbon graphite for CNG and stainless steel for LNG, which can add weight to a vehicle and potentially mitigate any fuel efficiency benefits.

In order to deliver DME in a cost-effective manner, Oberon has developed modular, small-scale production plants which are capable of producing 3,000 to 10,000 gallons of DME a day. The production plants can be placed either directly at a fleet operation or in a central location that allows various fleets within that region to utilize the fueling station. DME for that plant is produced from feedstocks found in the region where the plant is located. For operations with a plant on site, waste CO2 streams produced at the operation can be used to produce the fuel.

With the Oberon model, a remotely located operation can source and produce fuel locally instead of incurring the high cost of having fuel shipped in or traveling several miles to the nearest filling station. Placing the production center near the feedstock resource and the fleet also diminishes the amount of emissions that would be produced to transport the feedstock as well as the fuel to various parts of the country. Instead, regional fuel markets can be created to serve customers operating and hauling freight within that region, eliminating the need for a national infrastructure to be set up. As DME gathers ground in the marketplace, more regional hubs can be established in additional locations across the country.

The cost of establishing the smaller scale modular production plants is lower than that of large-scale operations. According to Boudreaux, costs are in the range of 10’s of thousands instead of the 100’s of thousands as is common with other types of fuel production units.

Oberon’s first production facilities will go online this June in the Imperial Valley region of California.

As Volvo gets ready to begin commercial production of its DME-fueled trucks in 2015, it will continue working with Oberon to test the vehicles and make adjustments or enhancements as necessary. Nyberg said real-world testing of the trucks have been occurring since the beginning of 2013. He noted that so far, drivers operating the DME-fueled trucks have said the vehicles ran no differently than conventional diesel trucks, which is an important factor to Volvo. The company wants to ensure that any new technology it develops will not cause a drastic change in the way operators drive a vehicle and deter them from using the alternatively fueled trucks.

The engine is part of Cummins' strategy to reduce emissions in heavy-duty trucks and equipment.
Cummins Inc.
October 20, 2021
Follow Us