As air monitoring technology becomes more portable and accessible, and clean air requirements continue to get stricter, the industry of clean air continues to be top of mind to equipment manufacturers and contractors alike. 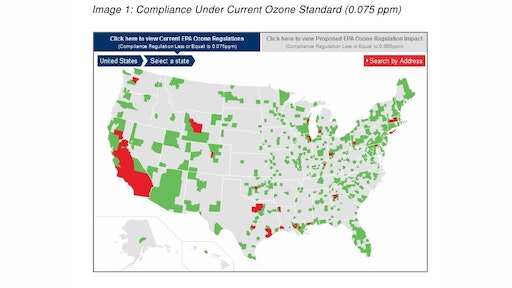 The EPA's current Ozone Regulations: Green indicates the county meets standards, red does not meet standards, and gray areas are not currently monitored.

I’m seeing more yellows, reds, oranges and some nice shades of green along the interstate this time of year. But I’m not talking about the leaves changing, I’m talking about the construction equipment and farm machines I see being shipped along the interstate coming and going from the Port of Baltimore and other reaches on flat-beds bound for somewhere. There’s even more of those fall-like colors in the highway construction projects, and with extra time in traffic backups, a lot can be learned.

There seems to be one of every kind of light tower, material handler, paving machine, articulated truck, excavator, sweeper and roller from every manufacturer. Some have a rather rusty look to them, others newer, maybe one or two that are really clean and look almost brand new and still others (newer looking) are ablaze with a rental company’s logo.

The good news is that they are working as this economy and spending starts to inhale and exhale a little more deeply. That image of the jobsite with the mix of old and new, borrowed and sometimes blue, however, is instructive about the state of the economy and the equipment industry.

The party is still not over on the Tier 4 technology. While milestones have been met by manufacturers, and machines now available, the slow-moving economic recovery has slowed investments in these new and near-zero emission machines. Some OEMs have trimmed growth expectations for 2014 down to the 2 to 3% range. Contrast this with heavy-duty commercial trucks with sales expected to break 250,000 units this year and you can only envy the optimism and increased demand for trucking services which also means the need to replace older equipment.

For equipment OEMs and contractors, the situation is more complex, with housing still depressed and commercial starts minimal, the construction fleet is aging. Tier 4 technology was a must-do to meet EPA requirements, but not necessarily the primary motivator for contractor investment. That motivator is and has to be benefits – in the form of greater efficiency on the jobsite, less fuel consumed, lower operating costs, more capabilities, uptime and reliability than the equipment it replaces. The new generation of technology offers all of that and more.

Air needs to get cleaner

Another ratcheting down of national clean air standards is on the horizon and with it will come the air quality area re-designations, and new state implementation plans and potential control measures. EPA is required by court order to issue a proposed rule December 2014 that is widely expected to slash the levels of allowable ozone in the air by another 30%. More states, counties and regions will find themselves designated as “non-attainment” for ozone and begin looking for reductions from emissions source inventories, including on- and off-road diesel vehicles and equipment.

What is the fallout for engine and equipment makers and their customers?

While it is hard to imagine a further reduction in engine standards, as reported last year, California is leading the charge for further reductions in nitrogen oxide (NOx) emissions; a precursor to ozone formation in some areas. With a new optional low-NOx standard that is 50 to 70% lower than the current federal and California standard (0.2g/BHP-hr, on the books in California since December 2013), only time will tell how and whether manufacturers will produce trucks that can be certified under an optional standard, and of course whether customers will buy them.

Tighter standards for manufacturers on new technology is one thing, but there are new forces that are likely to make clean air concerns in the future more relevant for contractors as well. Everyone is familiar with California’s mandatory diesel retrofit regulations for off-road equipment, but that program only applies in California (for the moment). Legal options for export of those California mandatory retrofit requirements to other states appear to be very cloudy or non-existent. But that doesn’t mean that other non-regulatory forces can’t have a near-regulatory kind of effect.

One example of the seriousness states are placing in emissions from existing engines and equipment can be found in New York at the New York State Energy Research and Development Authority (NYSERDA) who last year launched it’s Clean Diesel Clearinghouse, a growing database, free and accessible to users to input data on diesel engine retrofit technology costs and special considerations and options for retrofitting their machine or equipment. Last year, the US Green Building Council, as part of it’s Green building LEED certification, incorporated the potential for building owners and contractors to gain 1 pilot credit toward accreditation for meeting clean diesel construction requirements. These include minimum equipment performance standards (Tier 2) with the credit based in large part on increasing percentages of engines that use Tier 4 equipment in three horsepower ranges. Rebounds to road building activities or commercial construction are likely to consider green construction practices as threshold criteria - not regulations – but you’ve got to play along to have the chance to win the contract. That positions companies that have made investments in new clean diesel technology at a competitive advantage.

These days everyone is a reporter, thanks to the Internet, blogs and social media. Soon, just about anyone can also be an air pollution inspector as well, which has implications for both manufacturers and equipment users.

Official EPA air quality monitors are typically hidden away on poles or in cabinets in out-of-the-way places, often at schools or government buildings. They are stationary, large boxy meters or cyclones along with measuring and recording equipment. But EPA is rethinking the locations and monitoring network with the states with a trend toward monitoring more near the at-risk populations.

More research funding has been directed toward emissions evaluations in hot-spot areas, areas of concern for environmental justice, and along roadways where some of the highest emissions seem to be occurring.

The revolution in monitoring technology has downsized monitors, made them more portable and accelerated more recently to personal monitors and soon to smartphone plug-ins. (Think of a square trade credit card reader device to measure emissions plugged into the smartphone.) Now anyone with a little technical savvy can measure levels of particulate matter and other emissions at their exact location, in their community, along a roadside, adjacent to a freight distribution center or construction project.

How will this new information be used and interpreted?

Consider the possibilities: social media sharing about pollution “hot spots,” feeding data directly to regulators and to local reporters. But what this information means for compliance and ultimately determining non-attainment status, remains to be seen.

National clean air standards exist as either 8-hour averages or 1-hour maximums, which anticipates cyclical levels of emissions sources throughout a day; peak levels during afternoon rush hour, lower levels at night and morning are averaged out, and compliance determined.

Coming alongside this clean air emphasis are renewed concerns about real-world emissions performance from diesel engines, both on- and off-road. State and federal regulators are increasingly looking not just at new technology certification, but how it is performing in the field after 100 or 500 hours, or 50,000 miles. Some studies have suggested that emissions are higher than anticipated due to operational patterns of low load and lots of idle time which make it difficult to bring emissions control technology to optimum temperatures and performance.