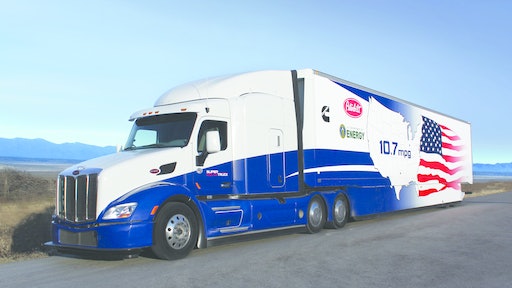 As with many industries, the U.S. military is looking to find ways to improve the efficiency of its vehicles while reducing emissions and fuel use. Major weight reductions, semi-autonomy to assist but not replace fighters, and a reduction in fuel and water consumption are among the key goals stated in the U.S. Army Tank Automotive Research Development and Engineering Center’s (TARDEC) “vision for the future.”

To achieve these goals, TARDEC is focusing on certain technologies which include:

During a recent CALSTART webinar, the organization examined how technologies being utilized and developed for the U.S. Department of Energy’s (DOE) SuperTruck program could be implemented by the military to help it meet the efficiency goals set out by TARDEC.

Started in 2010, SuperTruck is a cost-shared program consisting of four teams from the heavy-duty truck market which are working to develop a final demonstration Class 8 truck with a 50% freight efficiency improvement, 50% brake thermal efficiency (BTE) and pathways to 55% BTE. Each team has been working to improve vehicle efficiency through enhancements to the engine and aerodynamics, as well as developing or employing newer technologies such as waste heat recovery systems (see sidebar, pg. xx).

Every system plays a part

For SuperTruck, the teams looked at making adjustments or enhancements to all aspects of the vehicle in order to reach their efficiency targets, everything from the engine to the wheels to the shape of the cab and the mirrors. Many of the techniques utilized have already started making their way into Class 8 truck designs, while also providing industries such as the military with methods they too can attempt to increase vehicle efficiency.

Engine optimization has been a key element in meeting the efficiency needs of the SuperTruck program, which Ted Bloch-Rubin, Associate Project Manager at CALSTART, said during the webinar directly ties into TARDEC’s interest in advanced combat engines. To achieve this, many of the teams looked into improving engine control. Bloch-Rubin said that while engine controls in the past have been more reactive, the SuperTruck teams found predictive abilities—such as route adaptation and planning ahead via GPS—are the next step for improved engine utilization and efficiency.

Getting to a point where the predictive engine controls use algorithms to predict future response of an engine is a key interest area of the military, said Bloch-Rubin. Not only would these capabilities help improve the efficiency of the engine, but also provide the first steps toward vehicle automation, another interest of the military.

Integrating the engine with other systems, such as a transmission, has also been found to be key for engine optimization. The Cummins/Peterbilt-led team, for example, paired their engine with an advanced manual transmission from Eaton which allowed the team to downspeed the engine while getting the same level of performance at higher rpms. This is already a commercially available option from Cummins Inc. (company information, 10055252).

Improved engine combustion is also a top priority for the military, said Bloch-Rubin. Increased peak combustion pressure, optimum valve timing, higher injection pressure, turbo optimization, reduced EGR rates and a thermal barrier coating are among the many technologies employed by the SuperTruck teams to improve combustion. While each individual technology might not make much of a difference, Bloch-Rubin said using the technologies together and thinking of them as a package solution, will bring about the efficiency benefits for which manufacturers are looking. He also pointed out that some of these strategies are already being used in the market. The new Detroit DD15 engine, for example, uses optimum valve timing, piston bowl shape and turbo optimization for improved combustion capabilities (product information, 12025599).

The shape and weight of a vehicle can have just as much impact on its efficiency as any of the components or systems within it, which is why improving aerodynamics and reducing weight have become integral to vehicle design. Each of the SuperTruck teams used readily available technologies to improve the weight and aerodynamics of their designs. Though many of the aerodynamic systems, such as trailer skirts and boat tails, are only applicable for Class 8 trucks, employing rear-view cameras instead of large mirrors is one technique the military may find advantageous. The cameras are slimmer and thus more aerodynamic, as well as provide the operator with a clearer in-cab view of what’s happening behind the vehicle which also increases safety.

Weight reduction techniques used on the SuperTruck designs, however, are much more applicable for military vehicles. The teams went about reducing the weight of their vehicles by using lighter weight brake rotors and calipers, plastic fuel tanks, and composite front axle leaf springs. Having various components made from aluminum—such as axle hubs, wheels, clutch housings and cab frames—helped significantly reduce weight, as well.

Techniques for lightweighting can be especially beneficial for mitigating weight added to the vehicle by the inclusion of unconventional technologies such as waste heat recovery or hybrid systems.

Each of the SuperTruck teams investigated the use of alternative power sources as a means of increasing efficiency, such as through electrification and hybridization. While a full hybrid system could not be used because of the added weight and limited regenerative braking opportunities in long-haul applications that would mitigate potential savings, the increased amount of electrification in the vehicle enables partial hybridization for the use of idle reduction and start/stop systems.

Start/stop and idle shutdown systems are similar in that they both allow certain functions of the vehicle to continue running even when the engine is off. More commonly seen in newer passenger cars on the road today, start/stop systems turn off the engine when the vehicle comes to a stop, such as at a traffic light, and starts it up again once an operator presses the gas pedal. While the engine is off the operator still has full use of the radio, windshield wipers and other auxiliary functions.

Idle shutdown systems work in much the same way in that they allow the vehicle operator to shut off the engine and instead use a battery or auxiliary power unit (APU) to provide power for functions such as lights, HVAC systems or communication devices within the cab. This is most typically used in Class 8 trucks to keep drivers comfortable during their rest periods.

Having the ability to shut off the engine and use another power source reduces emissions and fuel consumption, as well as noise levels. This is especially important for military applications where being able to eliminate the noise of the engine but still utilize critical systems within the operator environment can save lives. “Both SuperTruck and the military are focused on idle fuel reduction. For the military, they see it as a need for enabling silent watch while saving fuel; there really is a dual purpose there,” said Bloch-Rubin.

Waste heat recovery systems were also investigated by the SuperTruck teams, and are a key technology of interest for the military. Bloch-Rubin said that because military vehicles have large engines that produce a lot of heat, advanced thermal management systems, such as those using waste heat recovery technology, have the potential to provide efficiency benefits.

Most waste heat recovery technologies are still in the prototype stages and are about five years from commercial availability, said Bloch-Rubin, as there is still work to be done to optimize their weight and integrate them with other systems. For the SuperTruck program, the teams focused on two types of waste heat recovery—Organic Rankine Cycle and Electrical Turbo-Compounding. Organic Rankine Cycle systems recapture a portion of the waste heat from the exhaust gas recirculation (EGR) aftertreatment system and/or from the exhaust heat to generate power. Electrical Turbo-Compounding uses a turbine to recover energy from the exhaust system to generate electrical power. All three SuperTruck teams are using waste heat recovery systems in their final designs.

In addition to these systems, the military is also interested in three other forms of waste heat technology:

Through the SuperTruck program, manufacturers within the heavy-duty trucking industry have had the opportunity to research various technologies and design techniques for improving vehicle efficiency; many of these technologies have already been brought to market or are now closer to being implemented than they might have been otherwise.

And because of this, industries such as the military can immediately use these technologies in their own vehicle designs. Though work may still be necessary to develop the products for more rugged environments, the groundwork has been laid to enable faster development of safe, fuel efficient vehicles for the military.

Head to www.oemoffhighway.com to read more about the SuperTruck program and the technologies being investigated in the articles It’s a bird…it’s a plane…it’s SuperTruck (search 10602353) and SuperTruck rides towards completion (search 11269209).

Currently there are three teams still actively participating in the SuperTruck program.