The company will also provide demonstrations of a mid-sized unmanned ground vehicle built by ARGO XTV which was the first application in which the Vanguard battery pack was used. 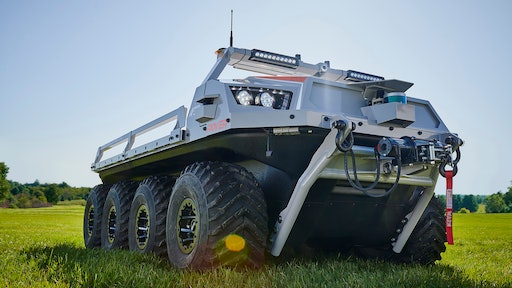 The Vanguard battery pack is used to power the ARGO J8 built by ARGO XTV which can be used in autonomous and tele-operation applications.

Briggs & Stratton will launch its new Vanguard Commercial Lithium Ion Battery pack and feature its entire lineup of new single-cylinder horizontal shaft engines at CONEXPO 2020 in booth #B7405 in the bronze lot.

“We’re proud to be the first manufacturer to introduce a complete, flexible commercial battery solution to the industry,” says Chris Davison, Senior Marketing Manager, Commercial Power. “Show attendees have the unique opportunity to experience the first scalable, serviceable battery in market, as well as see our entire new line of innovative single-cylinder engines.”

The customized Vanguard Lithium Ion Battery, controller and battery charger work seamlessly together to deliver efficient, flexible power and performance. Vanguard applied its first battery to a mid-sized unmanned ground vehicle built by ARGO XTV, a manufacturer of extreme terrain vehicles. The fully battery powered unit is primarily operated in autonomous and tele-operation modes, keeping service men and women out of harm’s way. Vanguard will display its new battery packs at CONEXPO and the ARGO J8 will be onsite for live demonstrations.

Also on display is the entire lineup of Vanguard’s new single-cylinder horizontal shaft family of commercial engines, including the new Vanguard 14.0 gross hp* 400, 10.0 gross hp* 300, 6.5 gross hp* 200 and 5.0 gross hp* 160. Built from the ground up with voice of the customer research, this groundbreaking family of engines is proven to operate with significantly reduced noise** and vibration*** levels compared to Honda and offers easy starting and longer maintenance intervals. The 200 and 400 are currently available, with the 160 scheduled to launch later this year and the 300 scheduled to become available in 2021.

The engine line features Vanguard innovations, including an oil management system which increases oil change intervals to 200 hours and cyclonic air filtration to dramatically reduce downtime associated with air filter maintenance. It is also equipped with TransportGuard, a single ignition and fuel shutoff to prevent oil/fuel dilution during transport.

MTS chose to integrate the Cat C18 engine which features a flexible aftertreatment solution allowing a redesign of the tractor cab and improved visibility.
November 10, 2020
Follow Us