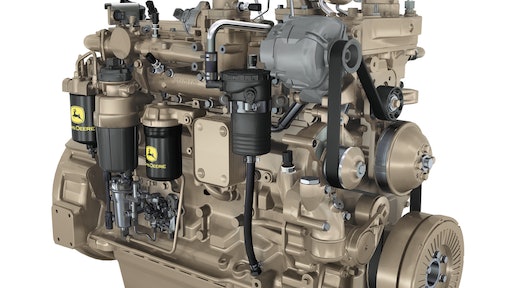 “Becoming one of the first engine manufacturers to certify engines in the 56 kW (75 hp) to 130 kW (174 hp) power category provides further evidence that our emissions-reduction solution is the right technology right now,” says Doug Laudick, product planning manager for JDPS. “Our OEMs and customers can be confident that we will deliver not only emissions compliance, but also the performance, reliability, durability and low operating costs they expect from John Deere.”

EPA Interim Tier 4 and EU Stage III B emissions regulations begin January 1, 2012, for 56 kW (75 hp) to 130 kW (174 hp) engines and require a 90% reduction in diesel particulate matter (PM) and up to an approximate 30% reduction in nitrogen oxide (NOx) from previous Tier 3/Stage III A requirements.

“Through rigorous field and lab testing, we ensure that our engines will meet the unique challenges of off-highway applications — including extreme vibration, high temperatures and duty cycles — in addition to new stringent emissions regulations,” Laudick says.

Ratings for the newly certified models include: