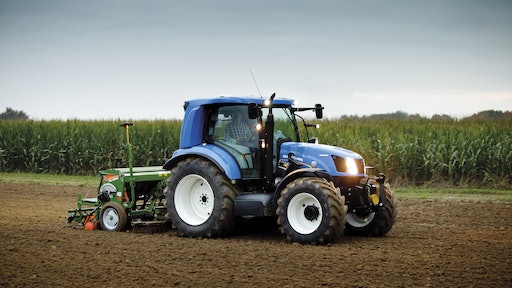 “At the 2016 Farm Progress Show, attendees will experience New Holland’s latest products and innovative ideas, which will help them improve the efficiency and sustainability of their farms,” says Bret Lieberman, Vice President New Holland North America. “This will enable them to do more with less, and this is our vision for the future of agriculture.”

The new prototype will feature the chassis of a T6 with similar horsepower and torque, but with alternative fuel options of biomethane, methane, biopropane and propane, resulting in 20-40% reduction in fuel costs. The prototype will produce 80% fewer greenhouse gas (GHG) emissions and lower particulates than its diesel counterpart and meets Tier 4 Final standards with only a catalytic converter.

Additional benefits to the alternative fuels include significant reduction in in-cab and drive-by noise, as well as faster startup during cold weather.

The New Holland Third-Generation Alternative Fuels Tractor prototype and full-working Bio-Methane Tractors illustrate the company’s commitment to developing advanced propulsion techniques that reduce dependence on fossil fuels, meaning farmers produce the energy they require for more economical productivity. The objective of the prototype is to generate the energy needed to run operations and farm equipment independently from crops grown on the farm.

New Holland’s Clean Energy Leader strategy perfectly reflects modern agriculture. Since 2006, this commitment has been the driver for the development of numerous pioneering initiatives built, created and shaped around the needs of farmers themselves, the machinery they use and the impact this has on the final consumers of the farmers’ products: the world’s population. It is a belief that characterizes everything New Holland does, and is enrooted in every factory, office and product. The overarching aims of the Clean Energy Leader program encompass helping farmers achieve energy independence, increasing their production efficiency and improving the sustainability of their agribusinesses. The program also underpins New Holland’s “committed company” ethos.