During SIMA, FPT is highlighting its Stage V engine technologies, as well as natural gas vehicles for use in agricultural applications. 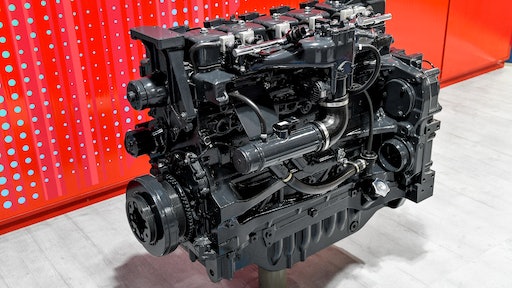 FPT Industrial displays the most representative models of its range of engines for agricultural applications at SIMA - Paris International Agribusiness Show - February 26 to March 2, 2017. This year sees a dual presence for CNH Industrial's brand dedicated to powertrains: show attendees can have a look at FPT Industrial's N67 Stage IV/Tier 4 Final and F34, which is compliant with Stage V emission standards, with its dealer Bimotor at Hall 4 - Booth K 063.

Furthermore, at New Holland Agriculture’s stand (Hall 6 - Booth B 027), the NEF 6 NG is showcased, which demonstrates FPT Industrial's leadership in Natural Gas engines. On the same stand, the F34 is installed on a New Holland T5.120 tractor, which won the "Best Utility" title in the the "Tractor of the Year®" 2017 award.

From the NEF Series, the N67 is a 6.7 L, 6 cylinder unit with a maximum power output of 230 kW (313 hp). Boasting a production of more than 1.6 million engines since 2001 from the NEF Series, N67 is a best-in-class engine for robust and reliable performance (up to +5% power density and up to +10% torque density versus competitors average). Its EGR-free architecture ensures top class efficiency (up to -3% fluid consumption versus competitors using EGR and active regeneration) and reliability, while maintenance-free ATS allows maximized vehicle uptime and no fuel consumption penalties.

No active regeneration means maximized uptime, as users have no need to halt equipment during operations. This also means greater safety while working, especially in closed environments such as farm buildings.

The N67 is the ideal choice for medium and large tractors, combine harvesters, feed mixers, grape harvesters and sprayers thanks to its outstanding fuel efficiency while ensuring high power and torque output. The N67 Stage IV/Tier 4 Final is equipped with HI-eSCR, FPT Industrial's breakthrough in Selective Catalytic Reduction (SCR), which was pioneered by FPT Industrial at its Research & Development Center in Arbon, Switzerland. Since 2005, over 650,000 units have been produced and are in operation in various applications, such as commercial vehicles, agricultural machinery and construction equipment.

Top performance, small size: the F34 is FPT Industrial's most compact solution for light applications, delivering high performance and low operating costs. Thanks to its packaging-optimized design, the F34 is the ideal choice for specialty and compact midrange tractor applications. The overall system’s compactness ensures vehicle maneuverability and high visibility.

The F34 is a top class torque density engine (6% higher than average competitors in the 3-4 L range) and allows prompt load response for maximum productivity. No active regeneration for maximized uptime means there is no need to stop equipment during operation and enables safe operations even in dusty environments. Furthermore, F34 requires no changes in the cooling package, using a single solution across emission stages, from Stage IV to Stage V. The F34 has the lowest EGR rate in the market with a 20% reduction in ATS and urea tank dimensions.

An F34 Tier 4 Final/Stage IV is also on display at New Holland Agriculture’s stand (Hall 6 - Booth B 027). It is the engine installed on the T5.120 tractor which recently won the "Best Utility" title in the "Tractor of the Year" awards 2017. The F34 not only meets stricter emission regulations but also delivers improved performance compared to the previous Tier 4 Interim/Stage IIIB version, further enhancing T5 versatility and capabilities. This is accomplished by an exclusive aftertreatment technology and upgraded engine components. To comply with regulatory requirements while ensuring overall system compactness, F34 Tier 4 Final/Stage IV features a Compact HI-eSCR system, a further evolution of FPT Industrial’s HI-eSCR technology already adopted on larger New Holland Agriculture machines, such as T8/T7/T6 tractors and combines.

On the New Holland Agriculture stand, attendees can also discover FPT Industrial's leadership in Natural Gas engines. With over 25 years of experience, more than 30,000 CNG engines sold and the widest range on the market, FPT Industrial is a pioneer and innovator in alternative fuel powertrains. Its products powered by natural gas, in its compressed (CNG), liquefied (LNG) or renewable form (bio-methane) and adaptable for LPG, are used for commercial vehicles, buses, and specialty vehicles. FPT Industrial has also been developing solutions for the off-road sector since 2011. The NEF 6 NG prototype engine that fellow CNH Industrial agricultural brand New Holland Agriculture has tested on its T6.180 Methane Power prototype tractor is an example. Both prototypes are on display at the New Holland Agriculture stand.

The stoichiometric technology, which has been adopted by FPT Industrial since 1995, ensures the correct air to gas ratio in all working conditions, thus delivering clean combustion and low emissions; FPT Industrial’s proprietary control strategy, specific pistons design and multi-point injection (gas is injected in the intake manifold through a set of dedicated gas injectors and then air-gas mix is ignited by the spark plug in the combustion chamber) render this possible.

Efficient and highly stable spark-ignited combustion reduces vibration and engine noise, up to -5 dB compared to conventional diesel engine. Emission compliance is reached with a maintenance-free three-way catalytic converter, a simple and smaller solution than the ATS required by diesel engines, and does not require DPF nor SCR systems.

Natural Gas ensures lower pollutants than a conventional diesel engine and can deliver zero CO2 emissions when using bio-methane, thus offering a significant carbon footprint reduction. The engine structure maintains its robust design for tractor installation, such as on the T6.180 Methane Power: the diesel-based design allows maximum reliability thanks to the high resistance structural block, while the oil sump is integrated in the tractor chassis.