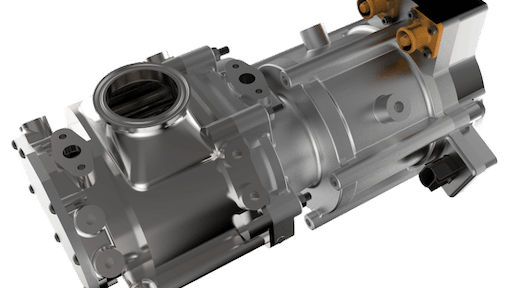 “Eaton has a long history helping our commercial diesel customers optimize through advanced materials and lowering friction. Now we are adapting several passenger car-derived technologies to enable next-generation advances in efficiency. In the EGR pump example, we are leveraging the precision air control of our twin-vortices (TVS) pump technology to allow a high volume of exhaust gas recirculation to dilute air mixture with low pumping loss, while also lowering in-cylinder temperatures. This allows an improvement in fuel economy, while at the same time lowering harmful NOx emissions. Using known technologies, we are bullish on efficient diesel power as central pillar to drive true ‘well-to-wheel’ environmental improvements.”

Eaton leveraged its experience with superchargers and positive displacement pumps when developing its TVS EGR pump. While the two are similar, a supercharger generates a high boost with average pressure ratios of 2.0-3.0 for many applications; an EGR pump uses a shorter rotor assembly and lower twist to produce flow just slightly above the intake pressure, or a pressure ratio of 1.05-1.50.

The setup allows the turbocharger to be optimized for maximum efficiency boosting without being compromised by the need to drive the EGR, which allows customers to utilize a highly efficient and lower-cost fixed geometry turbo (FGT) in place of variable geometry turbocharger (VGT) technology. In an engine designed with an efficient FGT, pumping work is decreased, enabling better fuel economy.

In addition, the pump allows engine manufacturers to eliminate a number of expensive components, including the turbocharger’s variable geometry turbine and actuator, the EGR valve, and potentially the EGR flow meter. Because the pump is a positive-displacement device, the engine controller can use the pump speed signal as well as other Controller Area Network (CAN) sensor data to accurately calculate EGR mass flow rate.

Additionally, because the pump can maintain any desired EGR flow rate, it can play an important role in emerging diesel engine efficiency strategies such as Miller Cycle operation, which leverages late intake valve closing for added fuel efficiency, and other key operating functions.

The TVS EGR pump currently is in the prototype stage and is undergoing evaluation with heavy-duty commercial vehicle engine manufacturers that have requested the technology. A preliminary production start date has been set but not announced publicly.