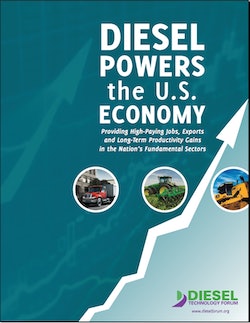 Diesel is the prime fuel for transporting freight, powering tractors, building roads, and meeting critically important demand for emergency services and national defense. More than four-fifths of products exported from and imported to the U.S. – by truck, train, ship or intermodal means – are moved using diesel technology. Three-quarters of the fossil-fueled equipment used in construction, mining and agriculture are diesel-powered. Diesel engines are the primary motive force for land and sea-route mass transit. Many emergency vehicles, such as fire and rescue vehicles, have diesel engines. Hospitals, government offices and businesses often rely on fast-response times and full load-carrying capability of diesel generators for emergency standby power. Our national defense relies on diesel to move material, munitions and weapons, both between theatres and on the battlefield. In short, diesel’s contribution to factories, farms and families is ubiquitous.

The advantages of diesel are manifest, making it a prime choice for these applications. Diesel power is energy-efficient, has high weight and energy power output ratios, has famously reliable and durable engines which can use renewable fuels, is highly portable and compact, and is safer compared to alternatives.