Using four steam cylinders and no cables or chains, the design eliminated cylinder shock and damage when working at high speed. 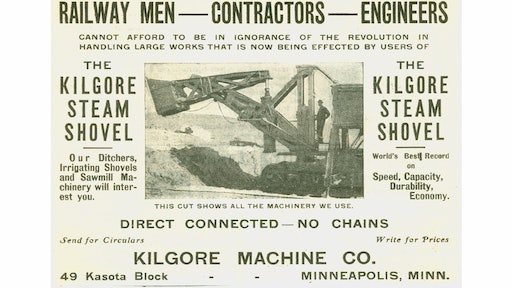 The photograph in this advertisement clearly shows the steam cylinder that raised and lowered the dipper stick. The second cylinder, which powered the crowd function, is barely visible inside the boom between the hoist cylinder and the boom tip.

The realization that applied hydraulic force made for more efficient digging power in an excavating machine first came to equipment builders in the 1880s.

The very first excavator to use hydraulic technology was built in 1882 by Sir W. G. Armstrong & Company in England, where it was used in construction of the Hull docks. Unlike today’s excavators that use hydraulic fluid, water was used to operate the hydraulic functions. Also, it was not a true hydraulic machine, but a hybrid that used cables to operate the bucket but with a hydraulic cylinder operating a set of multiplying sheaves. The idea was not successful, neither on this machine nor on a machine of somewhat similar design built by the unrelated Frank F. Armstrong for Penn Iron Mining Company in the United States in 1914.

The first all-hydraulic excavator, using only four direct-acting steam cylinders and no cables or chains, was the Direct Acting excavator built by the Kilgore Machine Company in 1897.

Kilgore touted several advantages to the design compared to conventional cable- or chain-operated shovels. It was built almost entirely of steel, making it sturdy. All motions, including each end of each cylinder’s stroke, was cushioned, eliminating shock or damage when working at full stroke at high speed.

The use of steam cylinders for all bucket functions gave the dipper a range of motion unlike that of any other shovel. Unlike most other shovels, it could crowd horizontally, and it could manipulate boulders and other obstructions more easily than other shovels.

All of its movements had equal power; the bucket could be withdrawn from the bank under load, instead of having to pull it up to the top to clear the cut. If the shovel derailed, the full application of power through all bucket motions could be deployed to lift it back onto the rails. The dipper could be shaken forcefully with the cylinders to dislodge material jammed inside it.

With the elimination of chains, cables, sheaves, drums, friction clutches, gears and hoisting engines, its design was very simple with few working parts. The simplicity extended to its operation. The four cylinders were controlled by two levers, and the engineer’s hand motion on each lever was exactly and instantly duplicated at the bucket.

Foretelling the full-revolving excavators that would emerge in the 20th century, the engineer’s station on the Kilgore shovel swung with the dipper, rather than being on the rigid main frame as on other railroad shovels. Rather than a trip rope or lever, a foot pedal was used to dump the bucket.

Kilgore also marketed the shovel’s economy of operation. The cylinders required less steam, hence less fuel and water, than other shovels because there was less machinery to be powered. The engineer operated all of the machine’s functions, where a conventional shovel required a second crewman to operate the dipper while the engineer ran everything else.

Kilgore is known to have produced two railroad shovels, with dipper capacities of 1-1/4 and 2-1/2 yards, with the Direct-Acting design. They also built Direct-Acting 1-1/4 yard traction wheel shovels; Steam Ditchers for excavating drainage ditches for land reclamation and irrigation; and dipper dredges. As advanced as its concepts were, Kilgore’s Direct-Acting excavators met with very limited success.