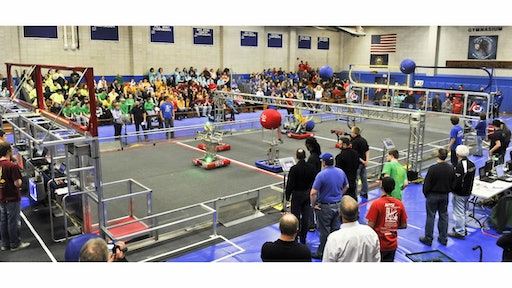 FIRST Robotics competitions are designed to be a sports-like atmosphere in which the student-built robots compete against one another by having to complete certain tasks in a "pit."

FIRST Robotics is one of many programs aimed at encouraging young people to pursue careers within the fields of science, technology, engineering and mathematics (STEM). STEM programs are designed to provide students with the skills they will need for related careers, as well as showcase the types of jobs that are available.

Started in 1989 by Dean Kamen—an inventor and entrepreneur—FIRST (For Inspiration and Recognition of Science and Technology) aims to teach students about science and technology through different types of design competitions, such as FIRST Robotics. Along with encouraging an interest in STEM education, FIRST says its goal is to help students build self-confidence, knowledge and life skills.

According to FIRST, there are over 900 scholarship opportunities available to program participants and in 2014 more than $20 million in college scholarships was given to students.

Geared towards students in grades 9 to 12, the FIRST Robotics program requires students to work together as a team to build and program a robot of their own design which will then perform certain tasks during competition against other student teams’ robots. The program has strict rules about how the robot can be designed and limits the resources students can use; each team receives a kit of common parts from FIRST with which to build the robot and then has six weeks to create its design.

Building the robots provides students an opportunity to learn how the science they are learning in the classroom can be applied in real-world conditions. It also affords them a chance to learn new science and technology information and skills they might not otherwise have gotten in the classroom, better preparing them for their future education and career endeavors. While working on the robots, students also get to learn how to use and work with software and hardware, further expanding their skills, especially in the burgeoning world of software development in engineering.

In addition to building the robot, teams must work together to raise funds for the building of the robot and create a team “brand.” This is meant to give students as much of a real-world engineering experience as possible by teaching them not only how to develop a design but also about the various aspects which must be taken into account when creating a design, such as cost and marketing.

Once students have built their robots, they have the opportunity to see how their designs measure up to other students’ from across the country. Competitions consist of each team’s robot having to complete certain tasks, such as throwing a block in a basket or raising a flag. Teams are awarded points based on how well their robot is able to complete each task.

Competitions are first held at a regional, then district level. If teams make it through their regional and district competitions they have the opportunity to compete in the FIRST Championship. Over 640 FIRST teams competed in the 2014 championship, with as many if not more expected for 2015.

The FIRST Championship is the culmination for many of its programs:

Students participating in the championship have the chance to show off their final designs while competing in a sports-like arena.

FIRST projects that in 2015 there will be 3,000 teams taking part in the FIRST Robotics Competition, reaching about 75,000 high school students in total.

The STEM community has been very involved with FIRST Robotics and the other FIRST programs. In addition to the many scholarships available, corporations and universities volunteer their time and resources to help support the efforts of FIRST. Many corporations donate the hardware and software used by the students during the design of their robots.

One of the many ways industry members can get involved is by becoming a mentor or coach, helping guide a team of students during the design of their robot. The mentor/coach acts as a professional role model for the students, providing them with the knowledge and skills they will need to create their designs.

There are opportunities for both technical and non-technical minded individuals to volunteer their time to FIRST Robotics, whether it’s mentoring a team or volunteering at one of the many events throughout the year. FIRST estimates over 180,000 volunteer roles will be filled over the course of the 2014/2015 season.

STEM programs such as FIRST provide students across the U.S. and the world with the opportunity to learn about science and technology and to see how it can be applied outside of the classroom. They let students see what kinds of potential job opportunities are available, and train them to become a more educated and skillful workforce, no matter what type of career they may choose.

Visit www.usfirst.org to learn more about FIRST and its programs, as well as how to get involved as a volunteer or sponsor.

With EVs quickly transitioning from the vehicle of the future to the vehicle for today, new trends are emerging to support manufacturer and regulatory goals of making EVs increasingly acceptable, accessible and attractive for a growing audience.
The Chemours Company
Nov 18th, 2022

Thanks to the team at Komatsu for showing us their latest innovations at bauma2022.
Komatsu America Corp.
Oct 27th, 2022

The Bobcat booth will be packed full of new equipment new technologies at Bauma 2022. Here's what you need to know.
Bobcat Company
Oct 24th, 2022

At Hall A4, Stand 325, the company will display its latest products and sustainability components.
John Deere Power Systems
Oct 14th, 2022

Exciting as this flurry of activity may be, it presents a very real threat to the automotive supply chain – one that supply chain executives should be paying careful attention to.
Actify
Oct 12th, 2022

The program is expected to change the way the company interacts with its customers.
Lori Ditoro
Oct 7th, 2022

Follow me on social media as I travel to Germany, where my father’s side of the family immigrated from, and get educated at one of our largest industry events.
Lori Ditoro
Oct 7th, 2022

The shape of this joystick reduces operator fatigue and the risk of repetitive strain. Learn more from the video below recorded during iVT Expo 2022.
Sure Grip Controls Inc.
Sep 27th, 2022

The basis of this concept was powering each drive axle of a truck or scraper with its own diesel engine and powertrain.
Historical Construction Equipment Association (HCEA)
Sep 26th, 2022