An update on the current and future hydraulic and pneumatic hybrid market. 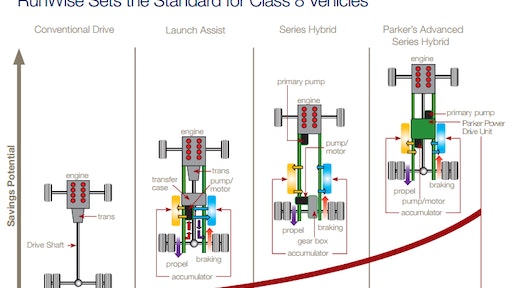 On- and off-highway applications have already accomplished much in overcoming the challenges of meeting the latest round of EPA and EU emission regulations, but they still face pressure to reduce emissions, especially greenhouse gases (GHG) in the next wave of regulations. Reducing GHG is accomplished primarily by burning less fuel. There are a variety of ways to accomplish this, one of which is using a hybrid powertrain. Hybrid technology in the on- and off-highway sectors is most often applied in niche applications that feature frequent stop/start drive cycles, such as front end loaders or refuse trucks. Ricardo estimates that only 0.2% of the nearly 4 million off-highway applications produced in 2015 will feature a hybrid powertrain system - excavators are the largest sub-segment with almost 2% hybridization rate. Similarly, on-highway hybrid vehicles, most of which are transit buses, account for 0.1% of the 3.9 million vehicles expected to be produced in 2015. By 2025 Ricardo estimates hybrid market share to increase to ~4%. These market estimates include a mix between battery, supercapacitor, flywheel and hydraulic energy storage hybrid systems.

Ricardo expects the largest hybrization growth activity to take place in the European Union followed by the United States. This is due to higher fuel prices in the EU (currently diesel is ~2.5x higher than the U.S.), which improves the return on investment (ROI) and reduces the payback period. Ricardo’s total cost of ownership studies show that typical on-highway customers expect a payback within 3 to 5 years whereas an off-highway customer desires a 1 to 1.5 year payback. The length of the payback period takes into account incremental cost, maintenance cost, productivity improvement, cost of capital and fuel costs.

Natural gas and diesel fuel costs have a large impact on the financial attractiveness of hybrid systems. In fact, Eaton exited the North American hydraulic hybrid market in late 2013, citing fuel prices as one of the primary reasons.

As previously mentioned, hybrid powertrains take a variety of forms, and up until now the focus of this article has been on hybrids as a broad category. There has been a lot of attention recently surrounding decreasing battery prices, largely due to the economies of scale gained from the growing passenger car EV market. However, there are applications that are better suited to non-electric hybrid solutions, which is why the remainder of this article will focus on pneumatic and hydraulic hybrid systems.

But what are the key differentiators between pneumatic and hydraulic systems? Hydraulic systems have the associated attributes of storing hydraulic fluid which is accompanied by a weight penalty, and environmental/safety concerns in the event of a hydraulic fluid leak. Weight not only impacts the fuel efficiency but also reduces the payload of the vehicle or machine.

Pneumatic systems require a multi-stage compression system which potentially adds to system complexity. Additionally, there has yet to be a system that has been mass produced and widely commercialized. However, Exelis is trying to change that by leveraging its high-pressure pneumatics knowledge from its defense and aerospace applications.

Parker, Dana and Lightning Hybrids believe that hydraulics are the best method to store energy. Lightning Hybrids’ focus has been on developing retrofit kits for MD transportation and utility vehicles. Parker’s system requires more integration due to its series hybrid architecture, and is primarily targeted at the refuse truck market. Dana’s technology is being applied equally to both on- and off-highway applications.

So, while hybrid electric vehicle architecture is being widely applied in automotive applications, the menu of available hybrid architectures for heavy-duty on- and off-highway applications is varied and offers many interesting technologies that can be equal to or even better than the hybrid electric architecture, at potentially lower cost or better productivity and payback period.  Look into all of the available options. You might like what you find.

Mark Kuhn and Joshua David are with Ricardo Strategic Consulting (RSC). RSC is active in on- and off-highway markets and offers a comprehensive portfolio of management consulting services, addressing high-impact strategic issues and solving operational problems at every stage of the value chain. If you would like to learn more, please contact mark.kuhn@ricardo.com or joshua.david@ricardo.com.

Exelis developed the first truly feasible pneumatic propulsion system, called the Hybrid Pneumatic Driveline (HPD). A unique compressor was engineered that absorbs energy from the vehicle drivetrain and uses this energy to compress air. The compressed air and heat is first stored in a bank of tanks, and later released into an air motor to accelerate the vehicle.

What: Hydraulic Hybrid (Series or Parallel)

The Spicer PowerBoost Hydraulic Hybrid System evaluates power levels needed, predicts operating demands, and determines the most efficient means of operation. As an adaptable, scalable, modular design, the Spicer PowerBoost Hydraulic Hybrid System fits into existing vehicle designs with minimal adaptation.  Engine sizes can also be reduced for power outputs ranging from 55 to 250 kW (74 to 335 hp) across a wide range of vehicle applications.

Lightning Hybrids developed a hydraulic hybrid system which collects and stores energy during stops that is then used for vehicle acceleration in place of, or to assist the engine. Lightning Hybrids' system is best suited for applications in which there are at least four or five braking events per mile, and for vehicles with a gross vehicle weight of 14,000 to 40,000 pounds. Currently there are about 50 of Lightning Hybrids’ hydraulic hybrid vehicles on the road in the U.S., UK, and India. Another 50 are being manufactured now and will be on the road before the end of the year.

The new DLG-Agrifuture Concept Winner is awarded to five pioneering achievements and visions for the future in agricultural technology.
Sara Jensen
February 15, 2022

Agricultural equipment production ended 2021 above the previous year's levels in North America and around the world, and is forecast to increase in 2022 as well.
Jim Downey
February 11, 2022

The T6 Methane Power delivers the performance of its diesel equivalent with the added advantage of up to 30% reduction in running costs.
New Holland Agriculture
February 9, 2022
Follow Us